Sea Woods Homeowners Association of New Smyrna Beach is the Florida-Friendly Landscaping winner in the smaller communities category of the 2013 Communities of Excellence contest. Preservation of natural and native habitat does not, unfortunately,just come naturally, but the community has placed a high priority on promoting indigenous species and minimizing impact on the environment.

Sea Woods is located across the street from the Atlantic on A1A, but manager Linda Armstrong notes one of their unique assets: “When they built Sea Woods in the mid-80s, the developer kept as many trees as they could. We have a lot of mature, established oaks, palmettos, and red bay trees throughout the community. The ocean is so close, but Sea Woods is very quiet and secluded and provides a break from the strong beach wind,” she explains.

“About three to four years ago, we started removing invasive plants like Brazilian pepper, asparagus fern, and trees that are crowding out old, native plants. Over the years, we’ve had people plant what they brought from home. The next thing you know, there are rubber trees and pines that are so big they’re considered invasive. Some older elaeagnus and viburnum had become woody more than green, so we’ve taken them out or pruned them to the ground to grow back,” Armstrong shares.

The community has not placed a formal limitation on plants, but homeowners are encouraged to get approval and use Florida-Friendly plants. “We’ve started a Green Thumb Award to encourage those who have updated their landscaping or excelled at maintenance. It’s a nice incentive and a way to recognize those who are being attentive to their landscaping,” notes Armstrong. 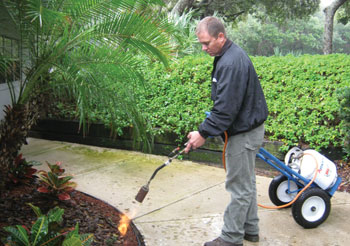 The community hires an arborist to assist in maintaining the existing native plants. “There is a lot of tree trimming, though we only take out dead trees,” according to Armstrong. The fire department and police department have also provided input, albeit contradictory. “The fire department advises that we keep palmettos and other bushes away from the buildings, as well as trimming any limbs over buildings,” recalls Armstrong. “The police say not to trim the palmettos by buildings because they’re hostile vegetation that will keep prowlers away from windows!”

The property’s red bay trees are currently vulnerable to laurel wilt disease. “A biologist has been infusing chemicals into the roots to protect the healthiest trees,” Armstrong reports. “We could not afford to treat them all, but I haven’t seen any dead trees yet.”

Converting to drought-resistant planting, removing areas of turf grass, and using drip irrigation are all designed to conserve water. “We’ve cut watering on established trees and shrubs,” Armstrong relates, “and we are trying to water less in the winter. Last summer, when there was a wet period, we turned off the sprinklers for over two weeks. Also, we’ve installed more efficient sprinkler heads that use less water and cover more area.”

To replace some of the invasive species and eliminate watering small turf areas, the association has installed mulch or river rock with native plants. “We’ve put in sea grapes, crotons, philodendron, Indian hawthorn, and white fountain grass,” according to Armstrong. “We’ve tried to eliminate small grass areas between the sidewalk and plant beds. The combined changes have saved about 10 percent on our water bill.”

The community’s landscaper utilizes a flambé method more common in Europe for combating smaller weeds: torching. “That’s all they do in Europe; they don’t use pesticides,” Armstrong reports. “It has a flame, but it’s not a fire-breathing blowtorch—it’s more like applying heat and melting them. We don’t use it near buildings or near heavy foliage, but it’s used to shrivel dollar weed and other smaller weeds.”

We’re trying to do away with as many chemicals as possible,” Armstrong says, “since we want to save the world for our children, too. We’ve cut down on some fertilization, from every two months to quarterly, and we’re trying to develop a program to use less chemicals and have them more environmentally friendly. The trick is finding the happy medium so the good plants can win.”

The community also has maintained its storm water retention system through regular maintenance, which has kept flooding under control and also netted the community more than $125,000 in avoided storm water retention fees over the last 15 years. “The builder put in dips and valleys throughout the 53 acres, and water dissipates incredibly quickly,” Armstrong notes. “In the winter, the landscapers clear the overgrowth and vines from the ground and the storm drains, so there’s no vegetation to impede the flow of water. An engineer inspects it every five years to certify that nothing is hampering the water flow, so we have a reduction in our fees. Our board president is very proud of this savings!”

A beautiful setting on the property is part of what spurs Sea Woods to protect what they have. Taking protection of the environment beyond the borders by conserving water, curtailing chemical use, and controlling storm water runoff is taking Florida-Friendly to heart. 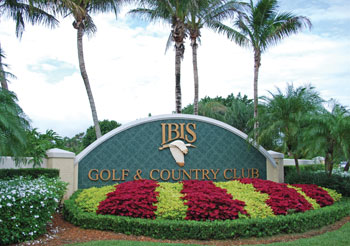 Ibis supports the environment in their own backyard by following Florida-Friendly landscaping principles in its large-scale grounds maintenance. Sean O’Reilly, who serves as Director of POA Maintenance and Landscape, has earned certifications as a horticulturist and arborist, and he points out that water is conserved by site-specific plantings. “Native plants such as cocoplum and buttonwood have been installed along many of our roadways,” O’Reilly reports. “These plants are extremely drought tolerant and require minimal supplemental fertilization. Recently the POA has purchased and installed more than 50 oak trees to form hammocks and native areas, with the hope of creating native areas in which irrigation is not needed once the canopies have spread.” Last year, the association also relocated oak trees to provide a wildlife habitat area.

“Our irrigation system employs both rain sensors and a weather station based evapo-transpiration system that factors in conditions such as humidity, wind, and temperature to determine watering needs,” O’Reilly notes. He states, “The POA has installed 12 gravity-feed fertigation tanks and feeders to serve its perimeter berm irrigation zones. We continually utilize a wetting agent in these tanks to help the plantings on the berm retain moisture. We have noticed an approximate reduction of 20 percent in irrigation cycles for these plantings.”

Contending with invasive species is a continuing project. Non-native species have been removed along one-and-a-half miles of the perimeter and in another five-acre area, and O’Reilly comments, “We eradicate in an area and then monitor for recurrence and treat as needed.”

This is an excerpt from the May 2013 article about Ibis POA. To read the article in its entirety, please follow this link: http://bit.ly/YHw9wB.