FCAP’s John Wattick with Converged Services Inc., shares why it’s important for board members and managers to monitor trends in technology and why it can even impact a board member’s fiduciary duty if left unchecked.

Consumers of all age groups are watching video on many devices and remotely.  Recent surveys have shown that over 60% of the viewing audiences have at least 4 devices in their homes and want the ability to remotely enjoy video as well as have access to security systems, lights and other in-home devices.

What impact does this shift in viewing habits have on community associations? Access to services and amenities by residents is the reason association board members and management company executives should take notice of trends in technology. The service in this instance is broadband technology.

The growing number of Smart TVs, tablets, smart phones and personal computers found in homes across the country is fueling the upward trend in broadband requirements in community associations.  Time spent watching digital video daily among adults 50 – 64 increased 72% in the second quarter of 2014 according to Nielsen’s Cross-Platform Q2 2014 viewing report. More than 70% of U.S. households subscribed to broadband services at the end of last year and more than half of those households surveyed have a TV connected to the internet, according to various research reports. 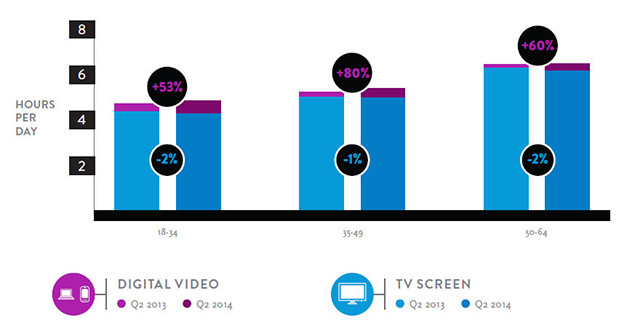 In addition to multiple devices used in homes, viewers are also moving in large numbers to direct streaming which pulls on an already stressed broadband delivery system in some of our existing communities. Welcome to the over-the-top era or OTT as media insiders refer to this period in consumer viewing history named for the proliferation of direct streaming services like Netflix, Hulu, and Amazon Prime. The OTT era is here and it’s not showing signs of slowing in the near future.

Researcher Joyce Wang says, “It’s been a busy couple months with numerous significant OTT announcements.” Time Warner execs finally confirmed an OTT version of HBO service to be launched in 2015. CBS is making its OTT service available in its owned-and-operated markets, and last month, Viacom officially announced a deal with Sony to license live and on-demand programming for Sony’s to-be-launched OTT service. Dish is working on its OTT package to be released by the end of the year. The Telcos (telephone companies) are looking to get a slice of the pie too, with both AT&T and Verizon execs signaling their interests in launching similar offerings.

Another concern association decision makers should keep in mind is that more video content over broadband means the possibility of internet service providers (ISPs) charging for data transport. There is significant scrutiny for the first time into interconnection, analysts say. The risk of OTT depends on whether cable can or can’t price broadband in such a way to offset lost video transport revenue and the most obvious ways to recapture lost “transport revenue” are usage based pricing, surcharges on naked broadband (deeper discounts on bundles) and interconnection pricing.

OTT providers have the support of the FCC as FCC Chairman, Tom Wheeler has circulated a rulemaking proposal to give OTT providers access to programming.  Wheeler announced “We have passed from an era where it was necessary to build a purpose-specific pathway to deliver video. The innovation of internet protocol (IP) has freed video from these closed pathways and single-purpose devices. Consumers have long complained about how their cable service forces them to buy channels they never watch.” Wheeler went on to say “The move of video onto the internet can do something about that frustration— but first internet video services need access to the programs.”

We are seeing this shift reflected in the numbers of broadband internet customers in the major providers’ portfolio vs their traditional video business.

As these trends in viewing continue it is imperative that service providers build and upgrade their architecture to handle these demands.  Deeper fiber penetration to the home (FTTH), IP and Cloud technology become essential features homeowners expect in their community.  Associations and management companies are beginning to experience selection when an association signs or renews their cable TV, internet and voice agreements, whether they are bulk, ROE (Right-of-Entry) or a combination.

The right-of-entry (or ROE) agreement is the legal agreement that allows the service provider to access private property for the purpose of providing broadband services to residents in a multi-dwelling unit such as a high-rise condominium.

Under a Bulk ROE agreement, the service provider provides its services to 100% of the residential units at the property, and the HOA pays a monthly bulk fee.

Under a standard ROE agreement, the service provider provides its service to any resident who subscribes to that service under a separate individual service agreement between the resident and the provider.

The chart below is significant for association board of directors and management companies as many residents are choosing communities that reflect this change in technology and delivery architecture. 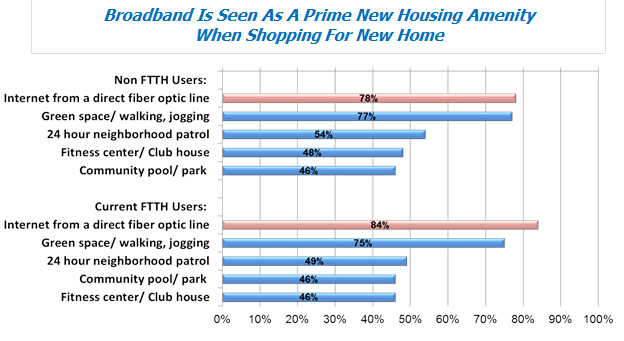 As a community association board member or management company executive it is imperative to stay abreast of technology and the costs associated with providing or more importantly, not providing access to the latest in broadband services to residents and homeowners. Industry consultants like FCAP’s John Wattick at Converged Services Inc. (CSI) can work with associations to determine if their community’s existing infrastructure is sufficient to meet current and future needs. Visit CSI at www.convergedservicesinc.com for more information on technology and your community.