Ron Baker, property manager of Turtle Creek No. 1 Association in Tequesta, has been with the association for more than 25 years. In this case, staying successfully in one spot is the result of constantly pressing forward. Baker’s background in construction led to his employment at Turtle Creek and has been invaluable throughout his career. “I was in construction growing up in my family, and when my dad was remodeling the country club at Turtle Creek, he told me about a job opening there,” Baker recalls. He moved into management a few years later and obtained his CAM license in 1992.

Built in the mid-70s, Turtle Creek is a quiet, golfing community with a park-like atmosphere, according to Baker. The property has natural good looks, but long-time resident Diana Castagnero comments, “The community looks better now than it did 30 years ago.” “If you’re an older community, you have to keep improving,” states Baker. “You have no choice, because these new communities will just beat your value to nothing.”

One of the first major projects Baker was involved with was concrete restoration performed in the 1990s in multiple phases. “Back when the buildings were constructed, everyone wanted AstroTurf and shag carpeting, which held the moisture in on the porches. We have waterproofed the decks and now there are no second floor decks with absorbent toppings,” Baker relates. “During that project, I used three contractors but only one engineer. I was not impressed with the safety, cost-efficiency, or cleanliness of the first two contractors. Clean-liness is a main factor in concrete work, and you have to seal the units well because the dust is unreal.”

“Re-roofing in 2009 was our biggest project,” reports Baker. “We did the whole place in three months. Two years ago, we remodeled our entire pool and recreation area, put in pavers and two big arbors, and repaved the front parking lot. This past year, we remodeled the pool area bathrooms, and staff did the painting and landscaping as well as replacing the fixtures with LED lighting. About 15 years ago, we had switched to fluorescent lighting, but now we’re switching to LED, and we expect to save over half of our electric lighting costs.” Castagnero adds, “Both restrooms at our recreation building/pool areas were totally remodeled by Ron and his workers. They look incredible; and Ron’s knowledge of construction, purchasing materials at the ‘best’ prices, and innovation in repurposing made these areas look outstanding and saved our association a great deal of funds.” 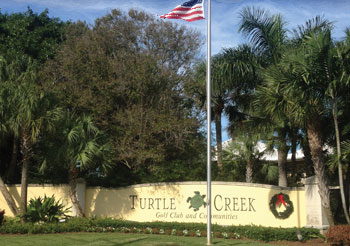 Baker and his staff of four maintain the 18 acres, including 11 acres of landscaped grounds, and perform all the association’s painting. “The association is very fortunate in that we have a landscape architect who lives here and he helps us enormously. He puts together new landscaping every year to rejuvenate the property with much better plants using less water. By using native plants, we’re saving on water use, so the turf is our only big water user. We do have a lot of St. Augustine, and it also takes a lot of spraying, but it looks so good!” Baker states.

“We’re on a rotation to paint and re-screen two of the 25, two-story buildings each year. It takes about one and a half months per building, and we apply an acrylic cementitious coating. This way the whole community always looks fresh. The staff is very experienced; the average employee has been here more than five years,” Baker comments. “By doing the painting ourselves, we save at least $30,000 each year on painting costs.”

Though much has changed over the years, basic goals remain. “The biggest challenges are being ready for season with your projects and coping with the budget—getting the best value for your dollar,” states Baker. “The only assessments we’ve had were for some 2004 and 2005 hurricane damage and for the re-roofing project. We’ve been able to keep maintenance fees the same since 2008.”

The “how” of keeping an association running smoothly is what makes the difference. “I have very good people to work with, and that’s the biggest blessing in the world,” Baker explains. “I love to work with other people with ideas, and it’s very rewarding when people are working together rather than competing. Your personality can help you a lot,” Baker notes. “Listen to what people are saying before you speak so you can put all the ideas together at one time. It only makes sense.”

Castagnero has seen Baker in action over the years and observes, “He’s able to keep the peace while getting the job done and enforcing the rules. He accomplishes this because he’s a very mild-mannered person, is incredibly flexible, and never dwells on negativity. It takes an act of God to get his temper up!”

Baker advises, “To keep a good community persona, enforcement of the rules and regulations is one of the best things you can do; and sometimes you may need legal help to do it. If you don’t enforce rules, everything gets out of whack. Pick-up trucks and animals can be two of the biggest problems in communities!” Baker has seen change over the years, and he remarks, “People don’t follow the rules like they used to! You really have to enforce them now, though it wasn’t a big issue years ago.”

“In the 80s and 90s, Turtle Creek was mostly retirees, many from World War II,” Baker recalls. “You get spoiled with retired owners; they’re just happy to be relaxing here with three golf courses nearby. That has changed, and now we have a slightly higher percentage of renters than we would like, which has increased our screening process.” 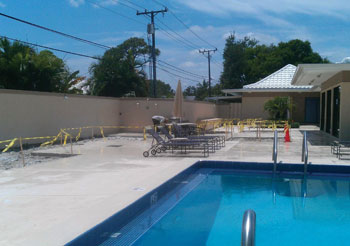 “Today’s information age makes a huge difference, since information you had to work to find out is so accessible now,” Baker comments. He keeps current by taking evening classes offered at the local high school and attending seminars. “I try to take one or two evening classes each year on computers and different subjects because everything is changing so fast,” Baker says. “Betterment is what we’re here for—all of us. You have to keep up with the new or your community will fail; no question about it.”

Castagnero expresses the community’s appreciation, noting, “He keeps up-to-date on the latest energy-saving methods.” Their 2012 pool renovation included installation of a high-efficiency, variable-speed, pool pump, which should cut the power usage in half. Other energy-saving measures include switching to LED lighting and low-voltage lighting for the landscape at the pool.

Though nothing will substitute for competency at the job, it is probably the service beyond the job description that has cemented Baker’s relationship with the community. Castagnero comments, “He is never too busy to assist a unit owner move a loved one into a wheelchair or help with lifting a heavy object. He will do anything within his capacity for a unit owner within working hours. For those who have known him a long time, it’s like having a son around.”

Bob VandeVisser, President of Turtle Creek No. 1 Condominium Association, states, “The owners at Turtle Creek No. 1 are very fortunate to have a manager as knowledgeable and skilled as Ron Baker. He personally knows all 150 unit owners by name and interacts with many of them on a daily basis. Ron knows the grounds and all 26 buildings like the back of his hand, including the recreation building and the swimming pool area. You can see his pride of workmanship when you visit the property. Speaking on behalf of the other board members, we cannot say enough about Ron Baker.” It is high tribute indeed when those who know you best appreciate you most!

Editor’s Note: The community contacted FLCAJ to ask if we would profile their manager, Ron Baker, as a way to express their appreciation for his many years of service.