The 2014 Communities of the Year demonstrate that excellence can be achieved by overcoming obstacles as well as developing a community from the ground up. VeronaWalk of Naples, winner of the Energy Efficiency and Safety and Security Initiatives categories, has been named Homeowner Association of the Year. The 2014 Condominium of the Year, Ocean Village Club of St. Augustine, is winner of the “Comeback Kid” category and has enjoyed a successful turnaround in their association.

Veronawalk of Naples–2014 HOA Community of the Year

The VeronaWalk community, which was turned over from the developer this spring, has been focused on both energy efficiency and safety and security since its inception in 2004. Conserving energy used for lighting has been a main focus, according to manager Lynn Ross, and she acknowledges, “We are very fortunate to have a maintenance supervisor who had his own lighting shop!” The community has been replacing metal halide and high-pressure sodium bulbs and ballasts with lower-wattage spirals, saving on labor and energy costs. Halogen bulbs used for landscape lighting have been replaced with compact fluorescent bulbs, which use one-third of the energy and do not generate heat, which had attracted fire ants. Pool lighting has been converted to LED lighting, with Ross commenting, “We’re paying half the cost, and the homeowners and pool maintenance personnel are amazed at how much brighter the pool is! State-of-the-art LED bulbs are being used in other areas of our community as well, with the end result that they are brighter, dimmable, last years longer, and use less than half as much energy. They generate very little heat, which would normally add to the air conditioning costs, and they save time and money on labor as well.” 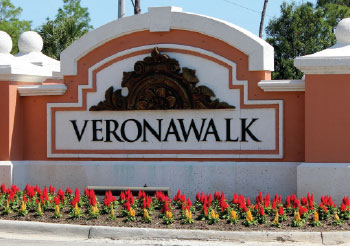 VeronaWalk utilizes a HVAC cooling tower with more efficient water-cooled chillers. This was installed during construction, as was the geothermal heating and cooling system for the community pools. Ross explains, “Using water from the lakes, where the temperature is 50–60 degrees, the pipes travel underground; so when the weather is cold, the water heats up as it travels underground and transfers heat to the pool. On a hot day, the system can run in reverse, and the water cools the pools and then is transferred underground where extra heat is transferred to the ground around the pipes. Our geothermal system reduces our energy bills by half,” states Ross.

The community has recently installed window and door shades in their ballroom, which was quite open to sunlight with windows on three sides. “I can’t quantify the savings,” reports Ross, “but before, we had to turn the thermostat to 68 degrees and still had to use fans when the room was full. Now we can set it at 73 degrees and people are comfortable, so the shades are making a difference.” Though the savings of individual measures are hard to track, the combined effect of changes the community has made since 2009 saves the community more than $20,000 per year in electricity costs. 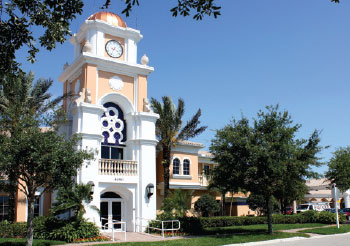 VeronaWalk’s safety and security depend on resident involvement plus effective systems. “The main component of our security system is access control,” according to safety and security committee chairman Barry Gerenstein. “Every resident who is licensed and insured has a registered bar code on their car and no one can follow in on their bumper. For each guest, we take a picture of their license, the driver, and their driver’s license, and we store it on a non-Internet connected computer. The residents can have a guest list so the visitor’s information is taken once and stored, but vendors are scanned every time they enter.”

The community employs professional security officers to man the entrance gate around the clock and also patrol the town center and pool areas. “The guard at the town center also makes sure all the lights are out,” Ross notes.

Surveillance cameras provide coverage of the common areas, and footage can be recalled for times in question. Gerenstein recalls, “A couple of years ago, we used the camera footage to identify teens who had spray-painted graffiti at the tennis courts, and we were able to get the parents to pay for the damage. An additional safety feature in the community is address signs, which can be activated to blink and help direct a first responder to the correct house in an emergency.”

Education and involvement of residents is another key component of VeronaWalk’s safety. “Neighborhood Watch started in 2006, and we have about 1,000 homes involved,” according to Gerenstein. “We’ve never subscribed to patrolling the streets, but the program has changed over the years. We advise residents to be observant, get to know your neighbors and what the norm is, and if you see something that doesn’t look right, make a call. We bring in the sheriff’s department each year for a crime prevention seminar and regular reminders—don’t go out with your windows open; every home has a central alarm system, so use it, etc.”

The community’s CERT has about 55 people and was established more than five years ago. “Last year in Daytona, our team was chosen as Team of the Year for Florida,” Gerenstein proudly relates. “We have ongoing training, participate in the county’s mock disaster drill, and advertise the team regularly in the monthly newsletter. The team was activated a couple of years ago when there was a wildfire in the adjoining preserve area. We had the sprinklers turned on toward the preserve and advised the residents to turn on their air conditioner to filter the air, and we were prepared to help with evacuation if necessary,” Gerenstein says. The community has also been certified as a Firewise Community by the Department of Forestry. The community’s efforts have been successful; “We have a letter from the Collier County Sheriff’s office stating that we’re one of the safest communities in the county,” Ross shares. Low crime and low utility costs are tangible benefits of the community’s efforts!

Ocean Village Club, nestled on 26 oceanfront acres in St. Augustine, is the proud winner of the “Comeback Kid” category. The community has gained financial stability and physical renovation after recognizing and addressing needed changes in procedures and planning. 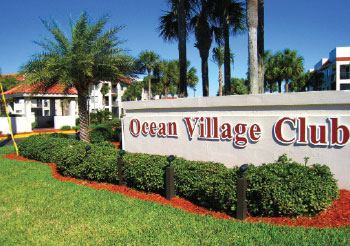 The community began seeing organizational structure issues around 2008, which was compounded by the need for roof replacements. This created division within the community between newer and older buildings, as some roofs were common elements while others were limited common elements. The landscaping was showing its age, as were the buildings’ paint and other maintenance items. The results were dissension and a reduction in community pride.

Having underfunded the reserves, there was not enough money available when the problems became a reality. “The biggest problem was that the majority vote at the time was ‘not to fund reserves,’” recalls Treasurer Anne Wipping. “For investors who were turning over units in one to two years, not funding was obviously in their favor, but as reserves were almost depleted and not sufficiently replaced, special assessments were required as it became apparent that new roofs were needed.”

The board made a decision that problem solving to fix this was not enough; what was needed was process changes in all areas, in addition to a long-term view that would become the roadmap. In order to execute this, landscape, management, and maintenance contracts were rebid and new companies were selected. Eventually, these companies became the key partners at OVC, and a goal of 100 percent transparency within the community was established.

The first step in the right direction was the completion of the reserves study. The planning process continued in 2009 when owners voted to switch the reserves funding from “straight line” to the “pooled cash flow” method, allowing for more time along the way. “We now place 28 percent of our annual budget in our pooled reserve fund. And, as we manage our reserve funds, we have negotiated improved interest rates with our banking partners,” says Wipping.

As Wipping reports, “Today, the association is not merely focused on retaining stable fees and keeping our spending in line with our annual approved balanced budget, but also on strategically planning our short- and long-term capital expenditures. The shared goal is to maintain service levels, adequately fund our common area reserves, and avoid homeowner assessment increases by generating revenue and reducing expenses where possible.” Savings have been achieved by paying insurance premiums without financing, replacing mulch with river rock, and changes in pool chemical use. A detailed, preventative maintenance program has also been implemented.

Significant savings were made for the community in negotiation of their cable television contract. Knowing that any change would require significant lead time, they put together a team in late 2012 to begin seeking vendors prior to their 2013 renewal. After learning of their owners’ use of landlines, Internet, and cable services, the association was able to obtain all three services with savings and increased services for most owners. “We had the largest vote participation in our history, with 80 percent participation, and positive votes of approximately 90 percent on each item,” relates Board Vice President Dennis Powers. “This was a win/win for our owners in that we have the latest technology, a limit on annual increases, and a savings to the majority of our owners for these services.

We also used a complimentary account for a community channel to provide announcements, rule reminders, and a short infomercial to further complement our communications.”

“We made a decision to use communication as a cornerstone to our strategy. We would make sure our owners had all the information they needed and deserved,” explains Powers. The quarterly newsletter was increased to weekly, a YouTube channel was set up, and social media was joined via Facebook, Twitter, and a blog. E-mail from owners is answered within 24 hours, and the annual meeting has been adapted to make it truly an owners meeting.

A major step has been the use of an annual, online survey to give owners another opportunity to express their opinions. The survey has grown to almost 70 percent participation, with more than 60 pages of write-in comments. The board is required to read each comment, and the weekly newsletter is used to communicate responses or clarifications. “All of a sudden, our owners felt we were listening, and they were not shy about providing us their input,” says Powers. 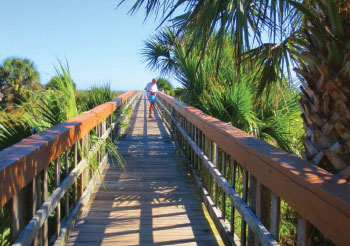 With these changes, the board has instituted procedures to keep on track. Contracts are controlled with a written process that only allows exceptions with board approval. The Communications Committee built on what had been started with the mission to make sure every owner knows everything going on. The Strategic Planning Committee, now called Vision, is in place for long-range plans. This assisted the Building and Grounds Committee, which is now properly funded and working on beautifying the grounds. The treasurer, together with the Budget and Finance Committee, worked diligently on the reserves and budget to determine what needed to be done for proper funding, without raising fees if possible. A small group has met with other local associations to begin to put together some best practices and learn from each other. Ocean Village Club was operating smoothly!

During the past few years, the community has invested more than $4 million completing major renovations, including 13 new flat roofs, which reduced the owners’ homeowners insurance through issuance of wind mitigation forms for each building. After completing concrete repairs, a modern exterior paint scheme was applied to all buildings, and the perimeter fencing was replaced. Major drainage and pool improvements have also been made. The results are a completely new, attractive curb appeal, which cannot be missed when driving along the historic A1A.

“With all the ingredients in place, Ocean Village Club is energetic and vibrant and displays a high level of community pride,” says Mary Campbell, Association President. “With trust and confidence restored, we now are able to move forward, and we truly have a new beginning.”