2015 Communities of Excellence Winners, Part I

2015 Communities of Excellence Winners, Part I

Editor’s Note: In the lead up to the 2016 Communities of Excellence Conference and Gala to be held May 13, 2016, at the Palm Beach County Convention Center, FLCAJ is reviewing part of the COE winners from 2015. The second group of winners will be featured in our January 2016 issue.

Apogee Beach Condominium Association, Hollywood
Built in 2013, Apogee Beach Condominium had already incorporated many water efficiencies. However, they evaluated and adopted a zero-bleed water conservation program for their cooling tower. By filtering and pretreating to remove impurities from their cooling tower water, the conventional bleed-off of concentrated minerals to prevent scaling is avoided. The system is saving more than 800,000 gallons of water per year, with an estimated cost benefit of $8,000 per year.

Large Communities (400 units and above)

Stonecrest POA, Summerfield
To minimize water use, the Stonecrest community initiated a water conservation and five-year landscape plan. A series of FFL workshops were held for residents, the list of acceptable plants was revised, and residents were offered microirrigation starter kits. High-maintenance common areas were re-landscaped, removing St. Augustine and replacing it with Asiatic jasmine where possible. The irrigation system was audited and repaired, with a dual-wire controller and rain-sensor system installed to help reduce overwatering. Metered irrigation costs were reduced by $81,000 from 2012 to 2013, and the 2014 use was cut another 10 percent.

City 24, Miami
City 24 chose retrofit projects to reduce energy use without compromising comfort or the budget. By installing control valves on the HVAC heat pumps and a variable frequency drive to control the motor, annual pump motor energy use was cut from $60,000 to $24,000 per year.
A variable speed drive was installed on the domestic water pump, reducing power consumption by 53 percent. Parking garage lighting was converted to LED lighting, reducing energy use by 77 percent and increasing light output by 200–1,000 percent.

On Top of the World Communities, Ocala
On Top of the World began examining ways to cut energy use in 2007 and followed many recommendations from an energy audit. The community is converting to energy-efficient LED lighting, upgraded their HVAC system in their recreation center, and added programmable thermostats. Pools are now heated by efficient gas heaters and are covered at night. A solar energy system was installed at the golf course in 2011 and has
a payback period of less than 13 years including a credit for selling extra power. A solar installation at the recreation center saves up to $1,200 per month in energy costs.

Madeira Cove Condominium Association, Madeira Beach
Madeira Cove, a self-managed community, found that their plants were not thriving, and their landscaping contractor was indifferent. After testing the soil, water, and plants, the community determined that they needed to match plants to their location and learn about their care. Volunteers attended an FFL workshop, and the board and owners have determined that FFL principles will improve the community’s curb appeal. The community will keep existing plants as long as possible, but will implement FFL principles for new plantings and landscaping, including integrated pest management.

Evergrene, Palm Beach Gardens
The Evergrene community was originally designed to promote environmental conservation and FFL principles. As the first residential community to be named a Signature Sanctuary by Audubon International, their documents and construction set the framework for the preservation of upland preserves, wildlife, water bodies, and green space, as well as establishing clear guidelines for homeowner landscaping. An annual seminar on adhering to Audubon and FFL standards is held, and association communications help residents comply with FFL principles. More than 80 species of birds are attracted to the community, and the association has received the Gold Audubon Signature Certification.

Fiddlesticks Country Club, Ft. Myers
The Fiddlesticks Country Club formed the 501(C)(3) Bobby Nichols-Fiddlesticks Charity Foundation in 2002 to raise funds for the Children’s Advocacy Center, Abuse Counseling and Treatment, and Blessings in a Backpack. With $6.4 million in donations raised thus far, the Foundation donated $900,000 in 2014 and also had a wing at the Children’s Advocacy Center built in its name. A complementary effort is made by Fiddlesticks Cares, a group of members who volunteer their time to a broader spectrum of charities. In 2014, the mayor presented Fiddlesticks with the key to the city for their generosity and dedication to children in need.

Mirror Lakes, a 55+ Adult Community, Boynton Beach
Mirror Lakes tailors communication to their residents, starting with new resident orientation in the clubhouse overlooking their lake. This is followed up with a “welcome neighbor” gift basket and a quarterly “Meet Your Neighbor” dessert happy hour. The Connections newsletter, available in print or e-mail, shares informational columns from residents plus news about clubs and activities. Word of mouth, phone, and bulletin boards are being supplemented with e-mail, Facebook, and texting, but face-to-face communication remains the most effective.

Southwood Residential Community Association, Tallahassee
New homeowners are connected to Southwood’s rules and regulations, activities, and communication methods through orientation and their new homeowner packets presented by the Welcoming Committee. Weekly e-mail blasts and a bi-monthly print newsletter provide current events, compliance tips, etc., and a Home Expo will also help with architectural/compliance choices. A community mobile app provides push notifications of current community updates to mobile phones, and a text messaging notification is starting in spring 2015. Social media and a website with a message board enable two-way communication for residents, organizations, and the association. The association tracks effectiveness of communication tools, finding that 60 percent of e-mail blast subscribers view them on a mobile device, etc. Sharing pictures via social media has enhanced community interest.

Heritage Park, St. Augustine
Heritage Park schedules monthly activity nights, holiday events, educational classes, fitness and sports activities, and special interest functions, with major event dates provided on a community calendar for the upcoming year. Special events especially appealing to families include the Family Egg-cellent Easter Egg Hunt, community yard sale, Fourth of July parade with fire trucks and helicopter, Halloween party and costume contest, winter social with donation collections, and holiday light contest. The sports courts and fields along with the clubhouse provide space for meetings and events. Volunteer involvement keeps the events coming without being a major expense to the community, and the teens are thanked by the social committee for their work each year with a dinner and movie night.

Independence, Winter Garden
Residents are offered a variety of regular and special events for opportunities for interaction. Each month a Food Truck Round-Up event is scheduled, with entertainment and food vendors. Family movie night, health and wellness programs, and seminars are offered regularly. The winter festival with real snow is the largest event of the year, but other popular family events include a spring Easter carnival, summer barbeque, National Night Out, Mardi Gras festival (ages 21+), fall festival, and bike rodeo. 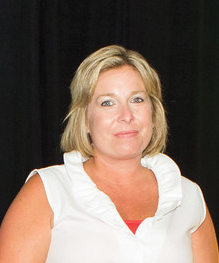 Editor’s Note: Jessi O’Quinn was one of five managers honored in 2015 as a manager of excellence. To read about the previous winners, please read the October and November 2015 issues.

Jessi O’Quinn with Sentry Management has been named a 2015 Manager of Excellence. As a portfolio manager, she has been at the helm of more than one award-winning association in the Communities of Excellence contest.

“In 2012, the Towns of Southgate, which I managed for almost six years, won the Financial Innovation Award,” says O’Quinn. “Like most communities, it was hit hard in 2007 by foreclosures and bankruptcies. They faced some major projects—roofs, painting, and sidewalk replacement. We worked steadily on collections and evaluated every contract to get costs lower. The community developed a five-year plan to complete the necessary projects. Currently landscaping, the last major area, is being finished.

“They did all this without a special assessment,” observes O’Quinn, “and it has been an amazing story. In five years, they’ve gone from a $500,000 deficit to a surplus of $300,000, and we’re decreasing dues this year. The board trusts me and my advice, which has been a big help, but the keys to our success have been aggressive collections and careful negotiation of contracts.”

This year, Buckingham Estates in Sanford won the Family-Friendly Programs and Initiatives category for smaller communities. “We started managing this community three years ago,” O’Quinn relates, “and when the new board was elected two years ago, they wanted to develop a friendlier community. The community hosted its first fall block party in 2014, with 207 attending. Holiday events, activity groups, spring and fall garage sales, and other events have helped the neighborhood come together as a community. On the financial side, we have re-done the perimeter walls and the front entrance, with projects totaling about a million dollars.”

O’Quinn sees the failure to pursue collections vigorously as a common mistake made by communities. “Sometimes boards think foreclosing on properties is a little too extreme, but I’ve never seen it that way,” she remarks. “I think it is a sound business practice and sets an example to all homeowners. Of the foreclosures at Towns of Southgate, we had nine rented and were making $9,000 per month. I’ve always moved forward on collections and foreclosures, and I educate the board on why this needs to be done. It is usually best to get a rental management company, so the board does not need to get involved in individual properties.

“Having the correct vendors in place is also a major issue,” O’Quinn notes. “For that, knowledge is power. Research the options and get plenty of quotes.” When project needs exceed the money available, O’Quinn is an advocate of tackling projects gradually when possible. “My approach is to break
projects into stages. That is preferable to having a special assessment that upsets the homeowners. Boards may think it’s cheaper to do a job all at once, but often it is not significantly different in total price, especially if the vendor is involved in planning and understands they will still get the total project.”

O’Quinn describes one community she manages that replaced the roofs on 85 units. “We’re doing about five roofs per quarter without an increase in dues,” she reports. “The roofer performed an initial inspection, so we’re doing them in order of need among properties with paid up assessments. The prioritization has encouraged homeowners to get current on their accounts so their roof will be attended to as soon as possible.”

For managing the physical property, O’Quinn places risk management and curb appeal at the top of the list. “We want to make sure that there are no trip-and-fall hazards, the pool is up to code, and the fire alarms and safety systems are working. Curb appeal helps sales and makes people feel happy and proud when they get home. We particularly want to have the entrance and lighting well maintained. If we take care of the common areas, residents are more likely to maintain their own places, which can help limit violations. I hate sending violation letters,” O’Quinn states, “but someone has to do it.”

The joys, trials, and variety in association management come from the people who live in the communities. “If you work with people and treat them with kindness and respect, they’ll give back to the community and feel a part of it,” O’Quinn points out. “I advise boards and managers to listen to what the community wants and don’t always push too hard with your ideas. If you make demands, people don’t feel wanted, and they won’t get involved. I try to help boards see that you catch more flies with honey, whether you want better attendance at functions or compliance with rules. Community events are especially encouraged to develop camaraderie and belonging as homeowners get to know each other.”

Though property management is not limited to 40 hours per week, O’Quinn appreciates the flexibility and challenges. “I can make the schedule fit around my life and family,” O’Quinn shares. “I enjoy that every day is different. It takes a sense of humor, or you could be upset every day because someone is irate about something. There’s a new lesson every day in community association management!”