Editor’s Note: In the lead up to the 2016 Communities of Excellence Conference and Gala to be held May 13, 2016, at the Palm Beach County Convention Center, FLCAJ is reviewing part of the COE winners from 2015. The second group of winners will be featured in our January 2016 issue.

L’Hermitage 1 Condominium Association, Ft. Lauderdale
L’Hermitage is a 25-story high-rise, which employs 24-hour security personnel. All security, concierge, management, and engineering personnel have FEMA CERT certification and are trained in first aid, CPR, and AED use. The association has 63 security cameras and an upgraded DVR system. Key fobs are programmable, and back-up keys are highly protected. Roof doors and perimeter doors sound an alarm at the security desk, as do Vision Link Nurse call system buttons installed in vestibules for use in fire or emergency.

Large Communities (400 units and above)

IslandWalk of Naples
The IslandWalk community, with more than 1,000,000 vehicles passing through their front gate each year, has installed a single-database system to control access and manage resident and guest entries with state-of-the-art bar code readers. High-resolution cameras were added in 2014. The sheriff’s department, volunteers, a roving officer patrol, and involved residents all contribute to the safety program and solution of security issues. For example, working with teens has practically eliminated problems with vandalism in the community, and adding key card access for the fitness center and post office during off hours has curtailed unauthorized entry there.

Trump Hollywood, Hollywood
The community has developed a hurricane manual and also updated their general emergency procedures in 2014. The community’s emergency response team attends quarterly training. Plans for supplies and equipment, record back-up, generator maintenance, identification of residents and disabled individuals, and other procedures are included in the hurricane manual.

Venetian Condominium, Ft. Lauderdale
Under a new board and management, the Venetian Condominium has eliminated debt and built up cash reserves so that a line of credit and borrowing to pay insurance premiums is no longer needed. The association has rigorous application screening and firm delinquency collection procedures. Energy-efficient upgrades, contract renegotiations and seeking multiple bids, revising the financial reporting method, use of contract personnel, use of direct debit for payments, collecting rent from tenants when landlords are overdue, and making dock users responsible for dock costs have all assisted in improving the financial situation. The monthly assessments have not increased since 2007 and have decreased twice!

St. George Plantation, St. George Island
St. George Plantation, a self-managed community, improved operating efficiency during the economic downturn, primarily through restructuring staff duties, reviewing all contracts, paying off a large bank loan, outsourcing tasks, and increasing use of technology. To save on consultant fees for construction projects, a facilities manager with engineering expertise was hired to coordinate projects. After reviewing interest rates and their reserve fund status, the association paid off their clubhouse loan by borrowing from themselves to save $800,000 in interest. The website has been automated, a commercial HOA banking platform is being used to facilitate owner payments, and communication with owners has become primarily paperless. Aggressive collections, conversion to less labor-intensive landscaping, and collection of fees have contributed to a healthy budget.

The Towers Condominium Association, Ft. Myers
The Towers was confronted with code violations, unit foreclosures, damaged units, and other management issues. In 2006, a new board hired professional management to turn the community around. Finances were audited, a law firm was engaged to address foreclosures, maintenance and repairs were performed, and payment of debts and upgrades to code were arranged. For more than seven years, the financial situation and physical condition have been put in order, prices have quadrupled from their depressed 2004 values, and foreclosures dropped to only two in 2014.

The Charter Club, Miami
A building more than 40 years old, the real estate market collapse, changing and ineffective management, and a lack of trust and communication brought The Charter Club to a point where major repairs and updates were necessary. The waiving of reserve funding and unsuccessful, special assessments had contributed to the community’s inability to fund needed projects. A more effective board brought new management that has helped identify essential improvements and arrange financing to supplement the required special assessment. From 2011 to 2014, The Charter Club revitalized aesthetically, structurally, financially, and socially, and they continue improvement of amenities on financially solid terms. 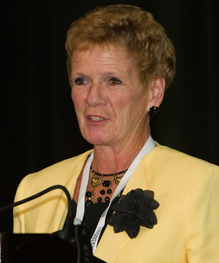 Teri Fifth, manager at Pines of Delray West for the past five years, has been named a 2015 Manager of Excellence for the community’s outstanding achievements. Pines of Delray West won the Financial Innovation award for smaller communities in 2014 and was a finalist in the Communications and Community division in 2015. These awards are quite fitting, as Fifth remarks, “There are two things I love about property management: I love doing financials, and I love people!”

Fifth has a background of more than 35 years in the apartment industry in various positions, including regional manager. She recalls, “When the market went down, they sold the property I’d been at for 13 years. A lot of properties were selling, and you had one choice—go into association management!”  Fifth worked at several other properties in the Delray area before landing at Pines of Delray West.

“When I came, the first thing to do was to get the budget in order,” Fifth shares. “Any new manager starts with the current budget to go back over the years and see if there is overspending. The budget shouldn’t be over or under, and you have to stay within it. You have to think what you’re going to spend your money on to get the most bang for your buck.

“I re-evaluated all the contracts for lower price or better service or both,” relates Fifth, which proved worthwhile. Costs were lowered for insurance, accounting fees, administrative expenses, printing and postage, landscape maintenance, irrigation, pool maintenance (by contracting it out), janitorial service (by bringing it in-house), exterminator service, and other areas. Contingency amounts have been reduced because the budget is more comprehensive and detailed, and thus less prone to variance. The bad debt, so rampant in that period, was reduced by redefining the late payment process and instituting a rigid procedure for delinquencies and pursuant legal actions.

Fifth states, “I run an association as a business. This is a corporation, so you don’t want anyone running it who doesn’t know how to run a business, read a financial, and do bank reconciliation.” With savings and discipline, the community’s financial status has flourished. “We are still firm believers in 100 percent transparency,” says Fifth. “We have saved enough surplus in our operating budget to replace our Federal Pacific electric panels at the beginning of 2016 with no special assessment—a $250,000 project. Those panels have been a fire hazard for a number of years.”

Building trust in the community was a challenge due to the community’s past experiences. “I had to prove I know what I’m doing and know what I’m saying,” Fifth recalls. “I never approach a problem until I have some type of solution and the proof to go with it. We had a number of projects—installing an asphalt overlay, adding concrete sidewalks, laying travertine, and installing Diamond Brite at the pool. I built trust by saving the association money and by always being able to prove what I say.”

Fifth has also cultivated trust through her appreciation of residents. “I’m a firm believer that, even though they’re shareholders, this is their home, so everyone needs to be treated with respect and everybody needs to be heard. I have an open door policy. The residents love that they can ask questions, not only of me but of the board. They’ve gained knowledge that they never had before.”

Resident interaction has been increased by the community’s use of monthly newsletters, e-mails, their television channel, bulletin boards, website, Facebook, and other social media. A welcoming committee, building captains, 12 active committees, a suggestion box, and development of a communications committee in 2011 have also helped unify the association. Improved understanding has contributed to better compliance with rules:  “We have not had any compliance issues that the Grievance or Fining Committee has had to address in over two years,” says Fifth.

For communities to move forward and build and maintain property values, Fifth advises that the skills of the manager should be optimized. “Boards should take a chance and empower their manager; they went to school for a reason. If you micromanage, you’ll lose the good ones. Managers should not be afraid to speak their mind—but they need to have back-up to show why the concept they propose is better. A manager should stay calm and not change tone or have an attitude, but let the facts speak.” After years of showing that she knows of what she speaks, Fifth relates, “Now if there’s a problem, not only will the ownership back me, but so will the board.” Be kind to others and do your homework—early lessons still can be the answer for effective managing.