Waterchase Master POA, a 766-home community in Tampa, is the 2014 Communities of Excellence Family-Friendly Programs and Initiatives winner in the large communities category. The ten-year-old association is oriented toward all ages with its activities and amenities, which include a three-story water slide. “The slide is a big attraction, and we also have a gym, aerobics room, tennis courts, basketball courts, playground, and soccer field,” says Activities Director Kim Skrovanek.

A former event planner, Skrovanek joined the community three years ago and has brought new ideas big and small, with many quickly becoming welcome traditions. “We have monthly major events, and also routine classes and smaller activities,” Skrovanek explains. “I get inspirations for events from past experience or from ideas I happen to run across. There’s a group of residents that I go to for ideas also. My personal passion is animals and animal rescue, so I started ‘Breakfast with Critters’ once each month. An online picture of a beautiful cupcake led to a cake decorating class. A Groupon ad showing ‘Painting with a Twist’ looked interesting, so we tried that.” 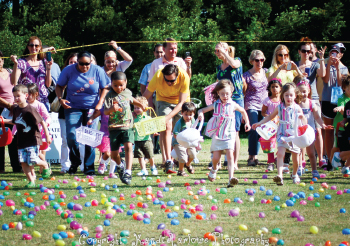 Though the community is on the lookout for new events, Skrovanek shares, “For the most part, the major monthly events remain the same from year to year because people get used to certain occasions and look forward to them. But even though the event is the same, the activities may vary from year to year. Waterchase Unleashed will feature pets, but one year it may have circus dogs and the next year agility dogs. The concert theme was Bands, Brew, and Barbecue one year, but I may change the theme and type of music another year.”

The current lineup features a 5K run and health expo in January, Painting with a Twist in February, Waterchase Unleashed Petfest and an Easter egg hunt in March and April (varying depending on which month Easter falls in), a business expo and mother-daughter tea in May, pool party in June, dive-in movie in July, planning in August, a luau in September, family funfest in October, concert in November, and holiday party in December. “The family funfest, holiday party, and Easter egg hunt are the most popular, and Waterchase Unleashed is growing,” according to Skrovanek. “Two hundred or so people usually attend the major events. At the family funfest, we have a farmer’s market, horse-drawn hayrides, and a petting zoo. The holiday party features Santa and train rides. All of the monthly events, except the luau, are for children and adults. The larger events are free except for the mother-daughter tea, which is presented by a tea room.”

A variety of smaller activities may be introduced, and regular classes and activities also fill the schedule. “Wine tasting, happy hour, and a cooking class are regular events. Bridge, tennis, yoga, and swimming classes are also offered. If an outside instructor conducts the class, there will usually be a fee,” Skrovanek notes.

After school care, summer camp, and camps during school breaks are held in the community. “We contract with a company who comes in and runs the camps, so this provides parents who work the opportunity to have their children here near home,” according to Skrovanek.

Skrovanek’s role is not to put up every table and grill each hot dog; as an event planner, she contacts vendors who want to have exposure in the community and puts the pieces of the plan together. “I get about $10,000 in cash sponsorships each year,” she reports. “The vendors get their logos on flyers, ads on the website, or a mention on Facebook. Because I use a local barbecue vendor so frequently, he agrees to provide free hot dogs. You have to get out in the local business community to network. If you want a donation for your community event, you have to ask!”

Getting the word out and building communication was necessary to get the ball rolling. “I got out and talked to people on the property, gathered e-mail addresses for e-mail blasts, and handed out flyers. We also gota new marquee sign to post events and messages on,” Skrovanek recalls.

Skrovanek feels that maintaining consistently high-caliber events is essential for keeping community interest up. “If you can’t arrange a full-scale event, change ideas,” she advises. “If people come and it’s not worthwhile, they’ll shut down and won’t come back.” Waterchase is following its own advice and is finding that new residents are also moving into the community to enjoy the quality family events they have heard about! 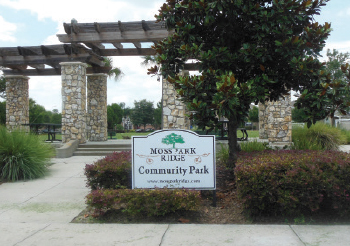 Moss Park Ridge HOA, the 2014 Communities of Excellence Family-Friendly Programs and Initiatives winner in the small communities division, has pursued participation of all their residents in decision making and community activities. The 185-home, Orlando community was turned over from the developer in 2010, and while a majority of the residents are families with children, Associa manager Bob Borg explains that the community demographics are very diverse. “We’re in a high-growth area less than five miles from the medical center here in Orlando, where they’ve built a VA hospital, a children’s hospital, and a medical and nursing school, and that brings in a wide array of people. We’re also within sight of Campus Crusade for Christ (now CRU), and at least 10–15 percent of our residents work there. The board really takes the time to include everybody—not just the group of people who tend to do everything.”

One of the most popular activities has been “Festival in the Park,” featuring a Caribbean-style band, pork barbeque, and games. “When you offer free food, a band, and fun games, people show up!” notes Borg. Food for the event was donated by sponsors, minimizing the cost to the residents. More than

100 people attended the event, which was held in the community’s central park area. “Pets in the Park offered information from local animal hospitals,” Borg states. While of interest to different ages, Borg recalls, “The weather was bad that day so attendance was not high.”

An ice cream social was also a big hit, according to Borg. Ice cream was paid for by the HOA and available for an after-dinner dessert at the park. “The community goes above and beyond in communicating activities,” Borg observes. “They post signs, send beautiful mailings, and use four-color fliers and postcards. They even go door-to-door contacting residents.”

While building community ties, the board has also been seeking input from residents concerning development of the park in the center of the community. “The board has conducted Internet and door-to-door surveys and had a separate area at community events to take surveys regarding different aspects of the community,” Borg reports. “When you’re planning big projects, you really want everyone behind you, though there will always be some in any community who don’t want any action.

“The outcome of soliciting residents’ opinions is that they installed basketball courts and a soccer field, and they will be adding shade structures at the existing tot lot and playground. The basketball courts have worked out very well. At the suggestion of the Orange County Parks and Recreation Department, we laid out two half courts side by side, with one goal shorter than regulation for the younger kids. This was to avoid having older kids bringing friends and taking over the courts, making it so the younger kids in the neighborhood didn’t have the opportunity to play.  We adjusted the lighting and shrubbery so the neighbors nearby wouldn’t be affected,” Borg explains. “The community also wants a pool, so they’re setting aside funds to reach that goal.”

The activities and investment in amenities at Moss Park Ridge reflect who they are. The board’s persistence in involving everyone in events and decision making has created a healthy community spirit that will continue to make Moss Park Ridge responsive to the needs of residents and families!