The Florida Statutes and your bylaws require this to happen every year—the annual meeting of your association and elections. Many are handled well with knowledgeable directors and a qualified manager, but many are not. See if you can spot the mistakes this homeowners association made during its annual meeting. There are at least 10 of them. By the way, this association does not have a CAM.

Dozens of owners and residents are streaming into the meeting room with ballots in hand that were mailed out two weeks ago, with a meeting notice and agenda and general proxies. Several owners have brought in ballots and proxies for their neighbors who could not attend. Some owners already mailed their ballots and proxies to the secretary.

As owners and tenants walk in, tables are set with voter registration records, but they are not allowed to sign in; they are told to wait. Instead of standing around, they find seats and complain to their neighbors, saying, “That’s not the way we used to do it.”

The board members are seated together panel style at a head table. There is a disorganized buzz among them, and they are oblivious to the murmuring of complaints among the owners and tenants. The president is there and appears unaware of what is happening at the voter registration table.

The secretary arrives armed with the minute book and the returned proxies and ballots and seats herself at the head table. Another board member crisscrosses the room; she seems to be counting heads. She is saying something about a quorum.

The treasurer arrives with an armful of what looks like the checkbook and other sundry items and seats herself at the head table. She is joined by the remaining board members.

There seems to be confusion at the head table. Soon the president announces for everyone to leave the room, reenter, and sign in at the voter registration table which is now adequately staffed.

As the owners are registering, other ladies are passing out ballots to those who have returned to their seats. After more confusion at the head table, the random passing out of the ballots stops. The ladies at the registration tables begin giving them to the owners as they sign in.

With a quorum present, the meeting is called to order. The secretary reads the minutes of the last board of directors’ meeting. 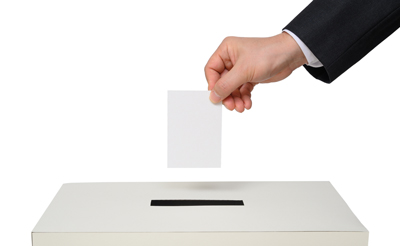 The treasurer’s report consists of the reading of each check written for the past month. A resident raises her hand and requests a copy of the year-to-date financials. The treasurer gives several excuses and blames the former manager, but the answer is—there have been no financials for anyone to review since the last CAM quit.

The president calls for reports of the eight standing committees. Only one is prepared to report. Her comments are read into the minutes.

The names of the nominees for director are read by the president. Nominations from the floor are entertained. One is made and seconded, and the owners in attendance are instructed to write in his name on the ballots they have been given. The nominees are given an opportunity to introduce themselves and state their qualifications.

The president says the owners can vote, the ballots are collected, and everyone is invited to help themselves to refreshments while several volunteers count the ballots.

How many of these did you spot?

It is probably safe to say these board members did not attend a Florida board certification course; they must have just signed that statement that says they know everything. Obviously, if these board members had taken advantage of the various local and state-wide opportunities to educate themselves, the meeting would have been more organized. A qualified CAM could have helped in the mechanics of the meeting.

The right people at the right place with the right skills are invaluable.

Betsy Barbieux, CAM, CFCAM, CMCA, guides managers, board members, and service providers in handling daily operations of their communities while at the same time dealing with different communication styles, difficult personalities, and conflict. Effective communication and efficient management are her goals. Since 1999, Betsy has educated thousands of managers, directors, and service providers. She is your trainer for life! Betsy is the author of Boardmanship, a columnist in the Florida Community Association Journal, and a former member of the Regulatory Council for Community Association Managers. Subscribe to CAM Matters™ on YouTube. For more information, contact Betsy@FloridaCAMSchools.com, call (352) 326-8365, or visit www.FloridaCAMSchools.com.