The 2016 winners in the Disaster Preparedness category of the Communities of Excellence contest are Cascades at Saint Lucie West Residents’ Association of Port Saint Lucie and Solaire at the Plaza in Orlando. Both of these communities realize the value of planning and practicing to truly prepare their communities for any disaster.

The Cascades at Saint Lucie West Residents’ Association, a 55+ homeowners association, encompasses 1,158 homes, a 26,000 square foot clubhouse, and a variety of outdoor amenities. “The residents are very active, with an average age close to 68,” reports manager Alex Watson, “and most are full-time residents.”

The community emergency response team (CERT) was started in 2006 by long-time board member Jim Syracuse, who is still working with the program. “The disaster plan has a large focus on hurricanes, of course, but it deals with everything,” Watson explains. “When CERT was first started, we received a grant to purchase supplies. We have everything you could possibly imagine—bins of cots, blankets, batteries, flashlights, tarps, duct tape—you name it. We haven’t taken advantage of grants lately because we have all the supplies we need; we’re stocked and ready.”

“We are one association, but it’s broken into seven districts, with two or three CERT members assigned to each district,” according to Watson. “There are about 40 active CERT members currently. The team goes to the local college for training, and we have a mock drill each spring.” 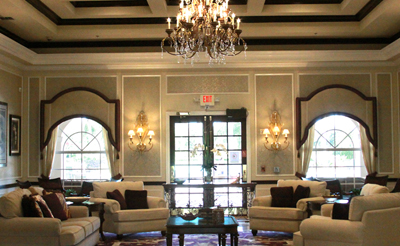 The mock drill is what weeds out the “good in theory, bad in practice” from the plan, according to Watson. “On a Saturday morning, the team sets up the ballroom as the central communication center, and everyone is assigned jobs:  triage, transportation, communication, assessment/first response. There are 20 locations set up around the community with dummies marked with wounds. They may have an arm wrapped or blood on the forehead, so the first responders communicate the problem and location, while triage assesses the problem and calls for transportation. The team wears vests to identify themselves, and golf carts are used for transportation. Once the drill is completed, the team discusses the challenges and how to reduce response times. One issue that was discovered during a drill was a failure in communication, so new walkie-talkies were purchased. The triage team couldn’t be reached, so someone had to be sent to find them.” By discovering snags during drills, the association will have eliminated some sources of delay in an actual emergency.

The Snorkel and Scuba Club also holds a drill each year simulating a drowning rescue. “They put someone in the pool and show how to pull him out using boards, and then they perform mock CPR (cardio-pulmonary resuscitation). It’s a free demonstration for the community, and usually 30–40 people come each year,” relates Watson.

Free CPR classes are offered twice each month by a resident nurse who volunteers to teach the class. “There are usually three to six residents at each session,” Watson notes. “The classes are completely free to residents—the association just pays a fee for the Red Cross certification.”

“Communication is key to any disaster plan or program,” states Watson. “One of the biggest things we’ve learned from the mock drills is that you can’t complete the task without communication.” To help prepare residents for emergency situations, local fire and police departments have made presentations on safety in the home, smoke alarms, installing a key lock box so emergency responders can enter the house, and other topics.

According to Watson, “Because we haven’t had any disasters lately, participation is down. That’s one of the biggest challenges currently. Many of the residents have been involved for quite a while, but unfortunately, it may take another incident to get more residents involved.” Fortunately for Cascades, plans are already in place and ready for the infrequent but inevitable next emergency.

The Solaire at the Plaza

The Solaire at the Plaza, a 30-story condominium with 306 homes, is located in the heart of downtown Orlando. According to manager Kristopher Schaeffer, “The disaster preparedness plan was first completed in 2009 after developer turnover, and the plan is updated annually as residents, surroundings, situations, and regulations transition.” The plan incorporates Orange County and Florida CERT guidelines as well as FirstService Residential management policies and practices. Hurricanes, floods, fire, electrical danger, hazardous materials release, and terrorist threats, such as a suspicious package, are included in the plan. 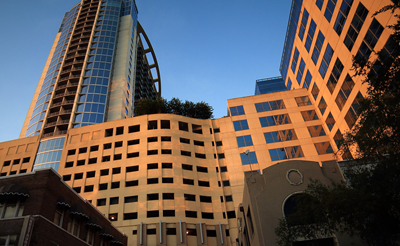 “The Solaire emergency plan involves the on-site management team, the on-site board members, and 24-hour on-site staff,” Schaeffer explains. Preferred vendors and off-duty officers will also play a part and are familiar with the site, access points, and emergency procedures.

The Solaire’s security serves as an aid in an emergency situation to identify the location of individuals and to control access. “To enter the building, both a fingerprint and fob are required,” relates Schaeffer, “and residents and guests can only access their own floors and stairwells. As part of a master association that includes restaurants, offices, commercial establishments, and a theater, security is not just nice—it’s essential. We have a firebox outside with keys to provide emergency access to first responders.”

Both owners and residents are provided with a copy of the emergency manual, which they are required to read and initial. A physical copy is provided, and the plan is also included as a PDF attachment with periodic newsletters.

“Although the building is equipped with a commercial-grade, emergency-backup generator, we have implemented an ancillary procedure to communicate as well,” shares Schaeffer. “The building is divided into zones by floor, with each zone consisting of four residential floors. Each team member is responsible for door-to-door notification of each resident in their zone in the event of a disaster during a power failure. Staff members and volunteer residents will have hand radios to communicate to the concierge that each zone has received notification.” Each zone has a primary and secondary full-time resident designated to coordinate emergency communication.

“A backup of supplies and equipment is secured at the facility for emergency access,” says Schaeffer. “Copies of all records are in off-site storage, plus thumb drives and Internet cloud storage contain backup data. The association regularly updates contact information for all homeowners, residents, and tenants, including telephone numbers, e-mail addresses, and mailing addresses. These lists ensure we have contact information for all homeowners, occupants, and tenants, and they also provide a hard form so attendance can be taken to ensure that all residents are accounted for and safe.” 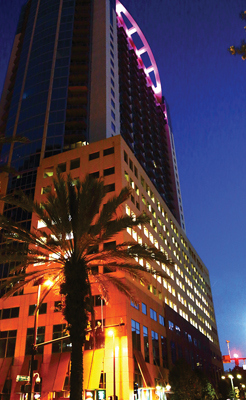 Practice reveals weaknesses in plans and ensures residents are actually prepared, not just in possession of a plan. Schaeffer relates, “Emergency exercise drills are conducted by Solaire at the Plaza management staff with a group of volunteer residents who update and distribute new and established techniques. Resident participation in regularly conducted drills makes these procedures routine, so the process can be followed more effectively and systematically.”

Planning, preparing, and practicing emergency response can become mundane in the extended absence of a threat. These winning communities realize the value of ongoing effort for preparedness to avoid the possibility of facing a crisis in chaos.