Villaggio, an adult, gated community in Lake Worth, Florida, has achieved significant energy savings by engaging in a series of energy saving projects that‘s worthy of reporting. Since 2008, the association examined the Florida Power and Lighting Co. (FPL) electric statements for monthly reductions resulting from applying efficient technologies and other enhancements, and the savings realized are significant. Some of the technologies and enhancements are simple to apply, while others require technical assessment and an initial investment.

These are the projects that have favorable returns on investment (ROI) when financially analyzed and technically administered.

REMOVAL OF INCANDESCENT LIGHTING WHERE APPLICABLE

The common, incandescent Thomas Edison light bulb, which has been around more than 130 years, has been declared by Congress soon to be unavailable as supplies diminish. Manufacturers are in the process of producing equivalent wattage bulbs using Compact Fluorescent Lights (CFL) at much lower energy consumption and usually with more lumens of lighting.

Replacing the incandescent light in our facilities—which include guardhouses, a clubhouse, and a fitness center—and outdoor lighting with comparable CFL bulbs, has reduced electrical energy consumption by 65 percent and has saved about $8,000 each year. These long-life bulbs (about eight years) have saved stocking inventory and replacement labor costs as an added bonus.

The economics to replace the CFL with the LED is more difficult to justify because the longer life has not yet reached its end of useful life. However, the LED does offer an added savings of about 20 percent over the CFL, with a combined savings of 85 percent over the incandescent light. Other benefits from the LED are no mercury in the bulbs, they are dimmable, are available in several color temperatures (expressed in degrees Kelvin) changing the room ambience from yellow to bright daylight, and have a long life up to 25 years. In addition, they give off less heat and that can reduce the heat load in air conditioning costs.

Replacing the basic room thermostats with programmable thermostats has enabled air conditioning set points to be set at higher temperatures during nighttime hours while the facilities are closed. Normal temperatures are resumed 30 minutes prior to morning openings.

Some surprising savings occurred at no cost to the association when air conditioning start times in the early mornings were staggered by 30 minutes. This is simple programming performed on the thermostats and may show up by minimizing the FPL online demand fees. This produced up to three percent in less kWh paid charges based on our usage, but in reality averaged an 18 percent savings because FPL raised their rates by 15 percent. 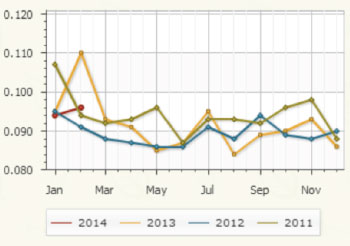 Based on the 2010 ASHRAE (formerly the American Society of Heating, Refrigerating, and Air Conditioning Engineers) accepted guidelines, air conditioning fresh air intake specifies minimum requirements based on populated room areas. It is frequently accomplished by setting the intake (outside air) damper to a fixed, open position or using a variable opening from a remote servo-drive setting.

In 2013, the association contracted to implement a state-of-the-art, On-Demand Ventilation method for modulating intake air. The system uses a carbon dioxide sensor in the return duct to the air handler as an indication of the quantity of occupants in the social hall of the clubhouse. This facility is about 3,000 square feet and has a fire-rated occupancy of 500 with two A/C units rated 25 tons each.

This modification replaced the fixed, open damper with a variable drive based on the sensor calibrated for the number of occupants. When the air conditioners start, the dampers open to its minimum position. As occupants enter the Social Hall, the sensor activates the variable setting to match the opening to satisfy the required ventilation and closes when the air conditioning cycles to the off position. This prevents further outside warm air and moisture from entering the system.

In assessing the ROI, each monthly FPL statement was analyzed for kWh usage (current and prior year), days of service, average high temperature recorded, cost per kWh total and by day, calculation of the service factors, the degree-day factors, and the percentage of energy used attributed to the social hall air conditioning. The compilation of data was determined for both the current month and that of the prior year month. (Trend data is shown in Figure 1.)

Comparisons between the before-and-after-modification statement costs were established and savings determined. For the six months of data, from September 2013 through February 2014, the savings were more than $3,100 or 13.5 percent. During this six-month period, there were three months of days with appreciable air conditioning. Over the year in this area of southern Florida, we would anticipate nine-to ten-months of hot weather requiring both 25 ton units online and anticipate even greater savings. The trend data indicates that we are on track for an overall savings of 18 percent. It will place us on the green path with an estimated ROI within 3 years—and this is just for our clubhouse.

An investigation into the primary use of energy was done in this facility because it was not obvious that the major consumer of energy was the air conditioning as it was in the clubhouse. The investigation determined that 45 percent of the energy usage was in the room that contained a heated, indoor pool. Two opposing forces were at work—and both consumed energy. Water was being heated in a space where the air was being conditioned to a significantly lower temperature than the surface of the water. Essentially, the duty cycle of both the pool water heater and the air conditioner were both very high because they were in conflict with one another.

It would appear that an easy solution would be to simply raise the air temperature in the room, but unfortunately with the high humidity levels generated by the large surface area of the pool, the room would be subject to mold.

The solution turned out to be simple and inexpensive: install a humidistat, which would activate the air conditioning when a humidity set point is reached; not a temperature set point. This was just recently installed, and small savings from this simple action are expected.

As in the Social Hall, aggressive reduction of incandescent lighting has taken place and will continue as even greater energy-saving devices become available.

To further reduce energy consumption, solar heating augmentation will be added to the conventional pool water heating system. Solar panels (the type that water runs through; not photovoltaic panels) will be installed on the south-facing roof of the building. Under electronic control, solar-heated water will circulate through the pool, and the electric heaters will only become active when the temperature of the solar-heated water is below the set point for the pool water temperature. Calculations indicate that the savings will be in the order of 20 percent, yielding an ROI of three years.

The original pool-heating units were very inefficient. Due to our southeast Florida location, these operationally costly water heaters were replaced with combination heat pump heater/chiller units (to cool the water in the hot summer months). The original pump motors used for circulating water through the filters and heaters were fixed speed. At the time that the heaters were replaced, variable speed pump motors, which require less energy to operate when running at demand-dictated reduced speed and do not have the same demand surge of a fixed speed pump when turning on, were also installed.

The combination of these improvements produced an 18 percent reduction in pool-associated electrical energy costs. (Our indoor pool has a fixed speed motor that will be replaced at its end-of-life.) 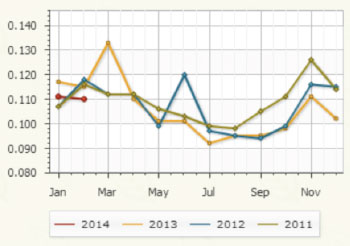 After water condensate from air conditioning duct work damaged a portion of the building (mold), an analysis of the cause was performed. The nature of this facility is that people within are engaging in strenuous, physical activity necessitating that the air temperature be low in the exercise areas of the building. The air handlers are pushing out 55 degree air into the ducts. Even wrapping the ducts with better insulation, the ducts were still sweating because of the warm air in the attic that was entering through the soffit vents.

The decision was made to seal the attic to prevent outside air from entering and line the interior roof surface with icynene, a foam insulating material, which according to the manufacturers of the material, was predicted to produce an approximate 17 percent reduction in air conditioning costs (as well as preventing the ducts from forming condensate). The real number is closer to five to six percent; consistent with the U.S. Department of Energy tests of this material.

How manufacturers are allowed to get away with falsely advertising the effects of using their products is beyond us, but never the less, we did get a small savings in energy use by using the icynene. (Trend data is shown in the Figure 2.)

Through aggressive and proactive initiatives, and a willingness to spend money to save money based on sound calculations and reasonable returns on investment, Villaggio has—in a short time—achieved significant savings that will continue to reward our actions with much reduced energy costs for the future.