The St. George Plantation Homeowners Association on St. George Island, winner of the Communities of Excellence Florida-Friendly Landscaping™ category for large communities, has adopted Florida-Friendly landscaping (FFL) principles and begun implementation of a 20-year landscaping plan. Since the association already adhered to a policy of using only plants native to the island, this has widened the selection of plants that homeowners can use. “When we were talking about making our community friendlier to owners, one of the first things we looked at was FFL because it is not only friendly to the environment, but it’s friendlier to owners as well. We had very few flowering plants and no annuals, but FFL guidelines opened up opportunities based on science for guidance,” explains Pat O’Connell, board member at St. George Plantation.

The 1200-acre community was built on the westernmost five-mile stretch of St. George Island in the Florida Panhandle in the mid-70s. Preservation of their natural habitat has always been a priority of the association, which maintains an active recycling program, a “dark skies” and turtle-friendly lighting policy to reduce lighting impact, a natural beachfront, and—up until now—a policy of using only plants native to the island. 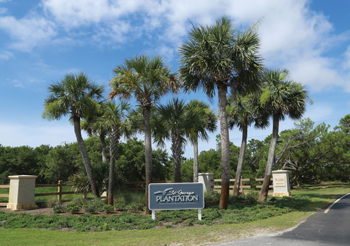 “There was very little landscaping done in the first 20 years because of turnover between developers, but today we’re self-managed and in great financial shape,” says O’Connell. “A few of us were familiar with Florida-Friendly Landscaping™, so we began a huge education and communication process. Besides opening up opportunities (beyond our current policy) to use a variety of plants that would grow well, it gave us guiding principles that changed many of our practices. We went through the process of changing our documents at the board level, and the next year we paid $40,000 for a master landscaping plan incorporating FFL.

“Turf area has been one of our biggest successes,” reports O’Connell. “A major recommendation that everyone has loved has been putting ourselves on a ‘mowing diet.’ Historically, we had a four-man crew that cut a 100-foot swath beside our five-mile-long main road and a 50-foot swath along the side roads. Mowing took 100 percent of the crew’s time from April to October. With our mowing diet, we have established curved borders around the trees and let regeneration occur on more than half the area.”

The community was apprehensive that the growing-in process would have a scruffy, new-beard appearance, and they posted signs notifying passers-by that this was a native vegetation, regeneration area. However, O’Connell is pleased to note that this was a surprisingly short phase,  “The signs have been taken down, and in one year, it’s incredibly regenerated. There are little pines and palms and October flowers, and in a couple of years, it will be beautiful. This was a favorite idea because everyone knew how wasteful all that mowing was.

“The savings is remarkable,” according to O’Connell. “Now the crew is doing more sophisticated work and saving us money we would have spent subcontracting other work.” In other places, turf may be the right plant, such as areas requiring erosion control, but in this place, the residents have been in agreement that reducing turf and mowing is the right move. 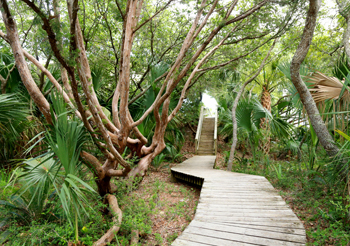 The community entrance had been substantially unchanged for approximately 40 years, so upgrading that area has been an early step in the plan. “We have changed from what I call ‘the Fort Apache look’ to tabby columns covered in shells,” says O’Connell. “The beds in front of the fence are enhanced with hardy, Florida-Friendly plants—juniper, grasses, and palms—rather than landscaping that is labor-intensive. For color, we have large flower containers filled with annuals and perennials. Other containers are located around the Plantation—at the pool and at the homes of many owners. They are very easy to maintain since they are on drip irrigation, and a local lady who can make anything grow replenishes them twice each year.”

While there are a number of phases and features of the landscaping plan, the association intends to proceed as funds allow without in-creasing fees. This year the community is installing new street signs made of recycled plastic composite material. With their “dark skies” policy and no street lighting, the community has a need for highly reflective signs with large lettering.

The association is incorporating other FFL principles as they proceed with projects. “We are currently putting our maintenance staff through green industry best management practices training,” O’Connell notes. To reduce storm water runoff, the association is exploring use of a porous, native material for bike paths and trails. At private residences, pavers or stones are used rather than asphalt to avoid runoff from non-porous surfaces. The community has also converted to drip or low-emission water systems using ground water, and they will be trying solar-powered irrigation.

O’Connell observes, “When you embark on a transformation like this, it’s important to get community input every step of the way. While the plans were being developed, there were meetings and ample communication about the plans and options. What we didn’t realize is that after a policy is adopted, you have to keep explaining it to others who come along and don’t know the history. The plan includes reforestation, roadwork, acquiring areas for paths and overlooks, and other aspects, but it’s spread over many years. When new people move in, they wonder, ‘What are you doing?’ and ‘Why aren’t you doing this?’ Now we have ongoing descriptions on the website, and we keep talking about it.” And with the success thus far, St. George’s plan is worth talking about!