Hurricanes deservedly set most of the agenda for disaster preparedness in Florida and sometimes overshadow the more likely threat of fire. While some of the damage prevention and response aspects overlap for different emergencies, fires are largely preventable and merit specific ongoing attention by homeowners.

Casia Sinco, Chief of the Bureau of Fire Prevention, reports, “The number one cause of fires in home structures is cooking. The biggest issue is leaving cooking unattended—stay in the kitchen, and if you leave, turn off the stove. Use a timer, keep a lid nearby in case grease catches on fire, keep kids away from the area, and keep flammable material away from heat [particularly electric burners that have not cooled down]. Be alert!”

Tom Morgan with American Strategic Insurance Group, a leader in writing property insurance for condominiums in Florida, relates that the most common causes of fire in their condominium association book are cooking, smoking, or improper disposal of cigarette butts in combustible material, electrical issues, dryer vents, and gas grills.

“We think that it is in the best interests of everyone within an association to understand how these losses occur and work to reduce them,” says Stephen Jones with Herbie Wiles Insurance Agency. “Set up a regular time each quarter to clean the dryer vents and take quick action on violations of fire codes or bylaws concerning gas grills. Use newsletters to remind members of the potential harm from overloading electrical circuits, overheating electrical cords by running them under throw rugs, improper disposal of cigarettes, or carelessness around kitchen stoves. Education is the only remedy we have to ask people to pay more attention to these causes. Most of these just involve common sense, yet these losses occur with amazing frequency.”

For a growing number of communities, you have to look both ways when it comes to fire. “As people have moved further out of the city into the wildland-urban interface, their homes are at risk from wildfires,” according to Patrick Mahoney, Wildfire Mitigation Specialist with the Florida Forestry Service, Myakka River District. “The wildfire season in Florida is January to December, though February to July is the most active time.”

Todd Schroeder, Wildfire Mitigation Specialist with the Tallahassee Forestry Center, points out, “The problem we have in Florida and nationwide is that we have so many homes located in remote areas near the edge of wildlands that fire departments’ response times are often significantly delayed.

We try to teach homeowners to be practical and proactive in reducing their wildfire risk by teaching them principles that will help them fend for themselves until an emergency response unit arrives. In the first three and a half months in Florida this year, we’ve had 623 fires. Nationally, of the homes lost annually to wildfires, typically 80 percent could have been saved had the owners followed a few fire-safe practices. That’s where the principles of Firewise (firewise.org) and Ready, Set, Go (wildlandfiresrsg.org) that we promote come in.”

“The foundation of the Firewise program is creating a defensible space around the home,” according to Schroeder. “That means creating at least a 30-foot buffer that contains nothing flammable around the house. We recommend avoiding mulch beds if possible and leaving a three-to-five-inch space between the side of the home and the nearest vegetation. Islands of plants are preferable over plants in a continuous path to the doorstep. River or lava rock is preferred for plant beds rather than pine needles, which burn hot and quick and could cause fire to spread quickly to the home.”

Mahoney comments, “Palmetto, any type of palm tree, gallberry, and pine trees are quite flammable. Because they are green, people think palm fronds won’t burn, but they do because of the high oil content. They can catch fire, detach, and shoot up into the air, possibly starting another fire. Thinning the fuel can be done by pruning— cutting a palmetto from six feet down to one to two feet can reduce the flame height from about 15 feet down to a much more manageable size. Other particularly troublesome plants are cogon grass, which is extremely flammable and burns erratically; and melaleucca, or paper tree, which creates smoke blacker than burning rubber.”

Other wildfire fuels to be eliminated include leaves and debris on the roof or gutters, as those combustibles can ignite and the fire can move to the attic. “Any fences or decks, if attached to the house, are part of the house,” Mahoney reminds homeowners. “A couple of years ago in Colorado, 80–90 homes were lost because wooden fences ran out into the woods and served as a “ladder fuel” to bring the fire to the house. If a fence comes up to the house, put a concrete pole or plastic fence post that will melt between the wood and the house.”

“Decks need to have wire mesh underneath to keep materials, which will act as kindling, from building up,” states Mahoney. “I recommend attaching L-shaped aluminum flashing where the deck meets the house. You can paint it the same color so no one knows it’s there, but if an ember lands there, it goes out. Any trailers also need to have the area underneath enclosed.”

Schroeder advises, “To avoid ember intrusion in attics, the vests need to be covered with small screening material to catch and block the embers from spreading. Combustibles such as lawn mowers, gas cans, or wood piles should not be under decks or touching the house. Obviously, yards and bushes need to be kept trimmed, dead plant material removed, and limbs kept away from the house, gutters, and rooftops.”

If a wildfire is in the area, homeowners should be aware that under the right conditions an ember can travel over a mile, according to Mahoney. “If a fire is within a mile and you have a sprinkler system, turn it on,” he recommends. “It won’t hurt anything and could prevent a new fire from breaking out.” 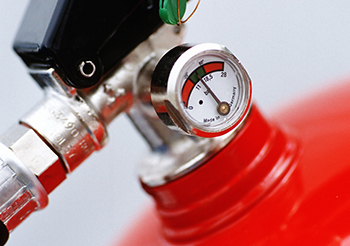 Patti DuBuque, Senior Manager with Leland Management and a Florida licensed CAM, PCAM, AMS, and CMCA, shares, “To face the threat of fire, the first step we encourage is preparedness. We suggest the board gather a planning committee by including those individuals who will be involved in the emergency response. Consult with your local professionals, including management staff, building staff, the local fire department, and local law enforcement—and don’t forget your association’s insurance professional.” The Florida Forest Service is also available with presentations and assistance, including controlled burns to invigorate the ecosystem and eliminate vegetation, which would spread a wildfire.

“Once the plan is developed, it must be communicated to all the members of the association,” DuBuque notes. “Communication with association members before, during, and after a disaster is essential to successful disaster management. We encourage boards to take into consideration the unique qualities of their community. Is it primarily a vacation rental? Are there special needs or homebound residents? What are the demographics of the community? Hold special meetings, distribute newsletters, post on websites and community boards, and use all available communication tools to ensure that residents have some awareness of the plan and how to evacuate the building. Most importantly, rehearse the plan periodically each year.”

Sinco advises, “Have fire drills often, because the more you practice, the more it is rote in case of a crisis. Work with the local fire department so they know the mobility of your residents. The more information the fire department has, the better.”

“Homeowners need to have a to-go kit ready for an evacuation,” states Mahoney. “It’s the same as for a hurricane, with important papers, medicine, etc. There is one important difference with a fire evacuation, though—the schedule. When we say to leave, there’s a reason. You might or might not have any time, and indecision can put people’s lives at risk.”

“Make sure your property is accessible to the fire department,” Mahoney notes. “If it’s a winding driveway, the truck may not be able to make the sharp turns. The roads need to be wide enough to support a truck turning around. The biggest need is for two ways in and out. If there’s only one entrance and the fire trucks are coming in, there’s a bottleneck and residents can’t evacuate. When a community becomes Firewise, we often talk to a neighbor to see if they will allow a point of access during an emergency. Usually they’ll agree and a locked gate will be installed, with the fire department keeping a key.”

Another preparation Mahoney recommends if the community does not have a hydrant is installing a dry hydrant. “If a pond is on site, a two-inch PVC pipe can be installed for a fire truck to access the water. The cost can be as little as $1,200 and can save lengthy trips by a truck to get water.”

DuBuque says, “Things such as functional emergency lighting, hard-wired or battery-operated smoke and carbon monoxide detectors in common areas, annual fire system inspections, annual fire extinguisher inspections, and making sure the building is kept up to code will go a long way in reducing the possibility of claims due to fire disasters.”

Jones notes, “If an association is able to avoid losses, it will normally have more carriers willing to compete for their business, which can drive insurance premiums lower. But if the association has a history of losses, not only will premiums move higher, but there is a real risk that many markets will refuse to provide a quote. This would greatly restrict options and may result in coverage gaps that could put the financial stability of the association at risk should another loss occur.” If additional financial justification for safety is needed, there you have it!

Prevention is the route of choice for dealing with fire, an option not usually available for disasters from wind and water. Lightning and accidents will never be eliminated, though, so take advantage of your local fire department, Florida Forest Service, and other professionals to give your community a fighting chance at fighting fire.