You can fight your environment or make it your ally. While some may have the chemicals, money, time, and water to maintain a landscape that is at odds with Florida soil and climate, many are realizing this is a battle best won by surrender. This year’s winners in the Florida-Friendly™ Landscaping category of the Communities of Excellence contest are enhancing their properties by working with the natural Florida environment as much as possible. Recognized for their achievements for 2016 are The Reserve at Belmere of Windermere in the smaller communities division and Saturnia Lakes of Naples and Starkey Ranch of Odessa as tied winners in the larger communities division.

Saturnia Lakes was established with a lush landscape and 11 lakes and preserve areas in 2002. However, long-term sustainability had become an issue for the irrigation system, many of the non-native plants, and the health of the lakes. The appearance, cost, and need to monitor and conserve water prompted the community to evaluate and try new methods.

“The irrigation was builder quality, and we could not monitor and control water consumption, not to mention the escalating costs,” relates Saturnia manager Carolyn Dvorak. “We upgraded our pumping stations, going from five to two, and added the ability to monitor, adjust, and control water use. Now water use in the winter is decreased by up to 70 percent. The upgrade cost about $145,000, but we are saving $18,000 per year on electricity costs and about $33,000 each year on repairs. There is now automatic usage reporting, so we can detect when flow valves are not working. We are able to comply with our water use permit, while with the old system we couldn’t even tell how much water we were using!”

To tend to their aging plants, which were not surviving because they were not suited to the environment, the community switched to a Florida-Friendly™ approach. Dvorak states, “The Landscape Committee brought in speakers from UF/IFAS (University of Florida Institute of Food and Agricultural Services) to survey the property. The committee attended certification classes, researched plants, and ensured the landscapers were certified in Best Management Practices.”

According to Dvorak, a five-year plan was developed to convert to more sustainable plantings. “The first priority was replacing dead plants, followed by those that were not doing well or were requiring excessive maintenance or fertilization. The result has been more color and healthier plants, which are using less water and not dying. Homeowners are provided a Florida-Friendly™ plant list, and the committee works with homeowners who are changing their landscape. Quite a few are replacing plants as they see this is a healthier look,” notes Dvorak, “and in many cases they are using fewer plants because in some places there was over-planting.”

The lakes were also deteriorating, with banks washing out and muck depths increasing dramatically. “Starting in 2009, the lake committee began planting littorals to stabilize banks and promote lake health,” reports Dvorak. Arrowhead, pickerel weed, golden canna, and other littorals were planted to reduce contaminants reaching the water and to attract wildlife. Water testing led to changes in fertilization to reduce phosphorus and nitrogen, but possibly the biggest improvement has come from pond treatment with pellets of bacteria. “This treatment has reduced muck levels as much as 30 inches in places,” says Dvorak, “possibly saving us from having to dredge the ponds.”

The combined effect of switching to plants that fit the environment, replacing the irrigation system, and protecting the ponds has produced a more attractive, healthier environment for Saturnia—well worth the investment.

While many communities find over time that maintaining non-native plants in the community is a battle, Starkey Ranch will not face that fight. Using Florida-friendly landscaping from its groundbreaking in 2013, Starkey Ranch has been developed with the vision of the original landscape and environment of the working Starkey Ranch as its model. “From the moment you drive in, you notice a very careful attention to nature and the environment,” shares director Mathew Eberius. “More than 800 acres of the community are being preserved as green space with trails, with about half of the community’s 2,400 acres devoted to lakes, ponds, wetlands, and parks. Every home is a few steps away from a park, green space, or preserve area.”

Wetland mitigation was part of the original development plan, and more than 100 trees were transplanted to an area behind the community’s Welcome Center. New stormwater ponds are planted with cypress and red maples, while invasive species are removed as the site is developed. 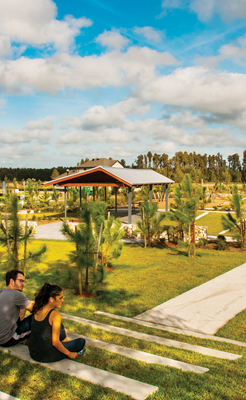 Using plants that were native to the ranch, the landscaping design has minimized water use with a predominantly native plant palette. “The new streetscapes and parks look like they’ve always been here,” comments Eberius. “We have an extensive list of native plants allowed in the community for homeowners to choose from. The plants being used are carefully selected, and I would say our landscaping is ‘very happy,’” says Eberius.

Reclaimed water from Pasco County is used for irrigation, which is primarily low volume or micro irrigation. Though the community is permitted for 29.6 inches average irrigation, only 20.5 inches will be applied annually. The native plants also require less fertilizer and pesticides to thrive.

The Starkey Ranch Welcome Center has been honored with the Florida Water Star certification recognizing their conservation of water in landscaping, irrigation, appliances, and plumbing. Beginning with conservation as a goal will benefit the community for years to come as they enjoy a more permanent landscape that can prosper in its environment…as it already has for many years.

By continuing with the plants that have long thrived in the area, Starkey Ranch can feel confident that their landscaping will flourish. Added bonuses are the conservation of water and other resources and the Old Florida aesthetics they will enjoy.

The Reserve at Belmere, which began construction in 2001, gained interest in a new approach to landscaping in 2009 as they saw original landscaping fail to thrive. “We had northern azaleas at the front gate that were basically sticks,” recalls Carol Emmett, current landscape committee chair who has been involved on the landscape, lakes, and ponds committee since that time. “I live on a retention pond, and the vegetation was so thick you could walk across it. I didn’t like the look of that, so I got involved.

“We are lucky to have a very talented but busy horticulturist who works at Walt Disney World living in our community,” shares Emmett. “He gave me time in 2009, and we built a strategic plan of 45 projects to turn our development around. It took us four to five years to work through the plan, and the recession slowed us down, but we finished the final project last year.

“It made sense that if we were not using Florida-Friendly™ plants, that’s why we had so much dead plant material,” explains Emmett. “We started with a workshop with the landscape committee and decided what we wanted our community to look like and what our landscape principles would be. We developed common area guidelines to use Florida-Friendly™ principles for landscape design and expenditures on HOA property. Since we’re an existing community, native plants are not everywhere; we can’t rip out all the existing landscape when one plant needs to be replaced. But, where we start fresh, we push to use Florida-Friendly™.”

The HOA CC&R documents have not been changed, as Emmett notes, “We’ve never had a member quorum at an annual meeting to be able to revise the documents. However, over the last year we’ve built a set of guidelines for the Architectural Review Board to provide community standards for homeowners beyond ‘aesthetic harmony’ mentioned in the CC&Rs. I’ve worked with the board on the landscaping section of those guidelines, and we encourage Florida-Friendly™, but it’s not required for individual homes. We provide suggestions and explain that it doesn’t mean creating a Tucson desert yard with just rocks. We can keep our lush Florida look using Florida-Friendly™ approaches. Our next step will be to host open meetings to introduce the concepts and allow residents to voice concerns and ask questions. Then it’s up to the board whether to pass the proposed guidelines.”

To treat the unhealthy lakes, the community has introduced shoreline plants and Asian carp to reduce the need for chemical treatments. “We have planted about 200 cypress, pine trees, and aquatic plants to reduce fertilizer runoff,” Emmett reports. “We’ve also removed invasive plants such as Caesar weed, Brazilian pepper, and slender spike rush from around ponds and in the conservation area. Orange County Environmental Protection Division just recognized our conservation efforts at a Board of Supervisors meeting—the only subdivision honored.”

Turf areas have been reduced if they are not suitable for a healthy stand of grass. “We were spending $6,000–$10,000 per year on sod replacement,” Emmett relates. “If the sod has problems now, we treat it; we don’t dig it up and rip it out. If it dies in areas with low irrigation, we install dune sunflowers (Helianthus debilis) that tolerate dry conditions. We are using more mulch in areas, though not as much pine bark since we are using pine straw in the conservations areas instead to also control weeds.”

The cost of annuals has been decreased from $15,000 per year to less than $4,000. Emmett notes, “Before, when a bush died, annuals were often planted in its place. Token beds of annuals had popped up, but we have replaced them with native species that offer color, such as ixora and drift roses, which don’t have to continually be replaced.”

The last project of the plan was converting an empty lot that was not buildable into a pocket park with a butterfly garden. “It is an upland buffer that backed to a marsh, so we had to use native plants,” comments Emmett. “Now it’s a beautiful park with benches, a walking path mulched with pine straw, and a color palette of gold, green, pink, and purple that blooms all through the year.”

The landscape committee has also contributed DIY projects to the community. “We took donations of agaves—‘If you dig it, we’ll move it’—and planted a beautiful area that cost nothing,” says Emmett. “We did the work ourselves in another area by buying $2 a gallon American beauty berry at a native plant nursery and planting them ourselves.

“The landscape budget has been the same since 2009,” reports Emmett, “and we never spend it all, so we have a good contingency budget for hurricane damage.” Emmett credits the community’s improved landscape to a strong, targeted foundation. “Start with a strategic plan, even if you have to hire help to come in to see the potential. That’s what kept us focused,” she remarks. With the proper plants, landscaping can be an investment that appreciates rather than depreciates—a goal worth the initial investment.