“Follow Me” Through Asphalt Rejuvenation at Spruce Creek Preserve

“Follow Me” Through Asphalt Rejuvenation at Spruce Creek Preserve

Some repair projects are inherently disruptive to individuals’ lives, and roadwork falls into that trying category. Nevertheless, after Spruce Creek Preserve completed the asphalt rejuvenation of its 7.2 miles of roads, manager Steve Butts began receiving notes of appreciation. “I probably received 100 or so notes, and you have to recognize and appreciate who made that happen—the crew from Asphalt Restoration Technology Systems (ARTS), Dan Netzer with Citrus County Contractors, and all the residents who pitched in. They made me look good,” Butts says.

Refreshingly, there is credit to share rather than blame. Connie Lorenz, President of Asphalt Restoration Technology Systems, the contractor who applied the pavement rejuvenator, comments, “We will be incorporating a lot of the procedures used by this community into our other projects. After 15 years in this business, I learned things from this manager as well as the board and loved it!” 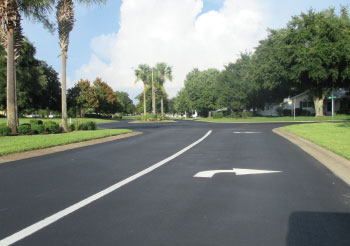 While the product will ultimately prove the effectiveness of the project, it is the planning and people who made the application project efficient. Planning for the improvement had its beginning three years ago when the community replaced six intersections and saw that more repairs were to come. “That’s when we started to look at alternatives, because the cost to repave the entire system would have been $1.5 million. While the community has good reserves,” Butts remarks, “they have other physical assets to maintain also, and depleting reserves strictly for paving didn’t seem a viable option. A special assessment for such projects reflects a total lack of planning!”

“About two years ago, I started to research and had the opportunity to find out about asphalt rejuvenation products at CAI training,” Butts recalls. “Those products would prolong the life of the roads four to five years with each application. Members of the board and I checked with at least six vendors that provided this service and followed up with three. In all cases where there is a substantial expense, we want to see the quality of a contractor’s work and the impact of the project on the association, so we visited references. Some were a good distance away, and perhaps they thought we would not take the time to go, but we called their bluff. It was good for us and gave us good insight as to why we didn’t want them—they had missed areas, overlapped onto areas, and didn’t resolve issues in a reasonable period of time.”

“When we checked references for ARTS, I talked to residents and the managers, who would in most cases receive the brunt of all criticisms,” Butts explains. “They had a community of senior residents similar to ours. We are a 55+ community with an average age of 70, and disrupting the daily routine for senior residents can be a substantial complication. We found that the communication and development of a phased application schedule by ARTS was second to none, which would benefit our residents, and their knowledge and experience was more advanced.”

The community’s successful project took 18 months to plan, another month to organize with the contractor, and 14 days to execute, plus striping 10 days later. “We put four foot by eight foot signs at the entrance and exit one month in advance, and four foot by four foot signs at the golf course,” Butts relates. “People knew there would be road closures for 24 hours and limitations on the types of vehicles for a period. We used the community TV channel, bulletin boards, monthly newsletter, hand-delivered notices, a dedicated website, telephone, and—most importantly—a knock on the door.”

“For a month in advance, every contractor was receiving a letter,” Lorenz points out.  “They knew the dates the streets would be closed, with no exceptions. They were all able to adjust, and there was no one showing up with furniture. There were no shocks, and there was no manipulating the gate/patrol staff.”

“Every morning the communication committee knocked on the door of each resident with their street closed that day,” Butts recalls.  “Even though they’d had months of news articles, individual handouts, and other notices, we were making sure they knew that we realized they were being inconvenienced, but we would help if they needed anything. And, we did get them everything from medication to milk. In reality, the one-on-one contact by Carol Griffith and the Com-munication Committee far outweighed every other mode of communication combined.”

“We set up on-street parking, which we don’t normally allow, on the adjoining streets for the houses, which had their street worked on. That worked out well,” according to Butts.  “For those who couldn’t walk or had assistance devices, we picked them up and transported them to their vehicle or the house so nobody was locked up for two days. We were able to take visiting home nurses to their patients when their streets were being worked on.”

Community volunteers and employees delivered packages and provided rides when streets were unavailable. Butts reports, “We used a golf cart labeled ‘Follow Me’ to escort people who had difficulty navigating the detours. Drivers could follow this vehicle and not crash through barricades or cones, and we also used it to give rides and deliver packages.” Butts comments, “That idea came from my military background and thought processes as to how to overcome any obstacle.”

Mother’s Day presented an impromptu challenge during the project: more than 500 deliveries that weekend were delivered from the front gate throughout the 675-home community by volunteers and staff. “Everyone got their roses and chocolates before they wilted or melted, and we executed well, but it was reactive,” Butts concedes. “It was a huge tribute to the mothers, but a shock we did not plan on.”

Amenities were closed for two weeks during the project, and Butts considers that one of the best decisions they made. “It limited traffic coming from all directions, where people would have been trying to navigate through closed areas. However, it may have been better to give one month’s notice for that rather than two weeks. People use the center every day for bingo, pool, line dancing, sports, etc., and perhaps they could have made other plans,” he notes.

Lorenz states, “This community hired a separate contractor, Citrus County Contractors, and accepted the expense of protecting everyone’s driveways. Usually, everyone has the choice of protecting their driveway from tracking rejuvenator with sand or a tarp, but that can be difficult for senior residents. Our employees can provide service to some, but on a limited basis or we wouldn’t be able to get our application finished.” By hiring a contractor, the sand was laid and cleaned up at the proper time, tarps were retained as a hurricane supply, driveways at homes with owners absent were protected, and there was no expensive cleaning or fines for soiled driveways. “It was an expense, but the expense of clean-up and so many hassles were eliminated,” Lorenz observes. “Retaining the tarps for future use was brilliant! They definitely saved money.”

For a successful project, Butts advises managers to first do their homework. “Especially if you’re an on-site manager, you’d best know what you’re about to embark upon. Communication needs to be not just with the residents, but with the board, because you’re leaving them in the cold if you don’t dot your ‘I’s and cross your ‘T’s. And, you need to follow through and make sure you’re receiving the quality of work, service, and product paid for. You’ll know how you’ve done from the feedback,” he notes.

Behind all the effort and the planning—in this case, by many—is a sincere concern for the residents. The desire to minimize the inconvenient impact for those affected led Spruce Creek Preserve to develop newideas, according to Lorenz. “If I could bag up the Communication Committee chairperson, I’d take her on every project!” Lorenz exclaims. “This community went above and beyond in planning and communicating.”