Get the Blisters Out

Get the Blisters Out

One frequent problem seen in Florida community associations is blistering of paint or coating. This is a phenomenon that occurs when newly applied paint detaches from the surface beneath for any number of reasons. It can be impossible to predict, appearing suddenly or occurring gradually.

Throughout Florida moisture often gets behind the coating or paint because of the prevalent conditions of high humidity and frequent rain. Paint peeling and blisters happen all the time, even to professional painters, but the issue is most likely to arise when preventive measures have not been taken. These problems can occur on interior and exterior surfaces with any kind of fresh paint. However, latex and acrylic paint are especially prone to blistering and bubbling.

Blistering occurs when the topcoat of paint begins to separate from the coat beneath, sometimes taking away multiple coats with it. Blistering is likely to occur on a moist surface that was not properly dried before it was painted. Some possible causes for bubbles caused from a loss of adhesion and lifting of a paint film from the underlying surface include the following:

If left untreated, the water that accumulates in the blister can absorb back into the wall and cause other issues, such as water stains, mold, or drywall damage. Even once it is treated, blistering and bubbling may reoccur until the root cause of the trouble is identified and resolved. 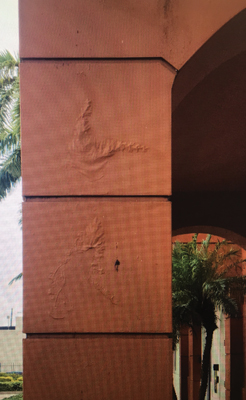 So how do you deal with blisters? Blisters that run into the painted surface, also known as the substrate, are likely caused by moisture that is escaping from the surface. The first step would be to remove any loose paint by scraping or other methods and sand down rough edges to smooth the surface. Before repainting, the cause of excess moisture should be determined to avoid the problem reoccurring in the future. Repair old or damaged caulking and install new caulking as needed. Give the moisture a path to escape instead of going through the paint by installing vents, exhaust fans, or sliding wedges.

Blisters that go down to a previous coat should be removed along with all loose paint by scraping or other methods, and then the surface can be sanded to smooth out any rough edges. Any glossy surface should be sanded dull and allowed sufficient time to dry after cleaning.

SEPI Painting & Waterproofing worked at a community that was on the waterfront in Key Biscayne, FL. In this case, the property was getting blisters on one of the elevations. These blisters were large and had a considerable amount of water in each. We noticed that the blisters were close to some stucco stops or reveals, which had been seen before on other buildings. In this case, because of heavy rains, the water was getting in behind the stucco stop and creating the blisters. 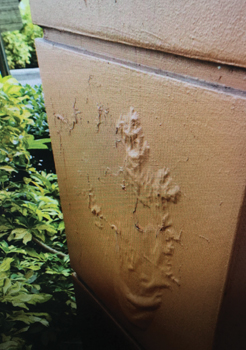 Over time the stucco tends to separate from the plastic molding, creating a gap for water to get into. The solution was to apply a bead of urethane caulking to the gaps. This stopped the water from getting in and we were then able to cut out the blister, dry the area, spot prime, feather the edges, and finally apply the finish coats.

Tony, one of the board members, says, “It was very troubling to see these large blisters on the exterior of the building. SEPI Painting & Waterproofing came out and provided their professional expertise to repair the issues our building was having. Since they have finished their work, the blister issues have been resolved and the building has been maintained in pristine condition.”

Blistering and bubbling are common coating problems that can occur for several different reasons. Preparation could be considered the most important part of painting, particularly on exterior walls. A surface experiencing blistering or bubbling is not beyond repair, and often scraping it and applying a new coat of paint should do the trick. However, persistent problems call for a deeper look into what is creating the trouble in order to take the appropriate action. In the case of a waterfront community in Key Biscayne, FL, the location itself was aggravating the issue due to the high levels of humidity and precipitation. In this case of unavoidable and abundant moisture, a thick, monolithic, and flexible protective film of urethane caulking was able to prevent future fracturing and compromised underlying substrates.

When Hurricane Andrew hit South Florida on August 24, 1992, Rick Hernandez decided to open his own company, and in October 1994 Sepi Corp. was born. The growth of Sepi Corp. went much better than anticipated. The new company was able to service both residential and commercial work. A few years later the company was rebranded, and the name was changed to Sepi Painting and Waterproofing Inc., which aided in marketing and led to additional growth. As the years passed, services were added, such as waterproofing, electrostatic painting, and chemical coatings.
For more information, visit www.sepipainting.com.