by Karen Shultes / Published May 2014

As I stepped out of my truck poolside at a community property, as I have done many times before, I was greeted by an elderly man who introduced himself as Mr. Panini. He was very interested and ready to do his due diligence as the board president. He wanted to make an educated decision when purchasing or refurbishing pool and deck furniture, and I was more than happy to assist him in this process.

Heading slowly in the direction of the pool deck, it was impossible not to notice some obvious liability issues that were of concern. The first thing that stuck out was the plastic ratchet assembly that was affixed to the back of the chaise lounge headrests by screws. Plastic headrests are extremely dangerous, and, especially in the hot, Floridian sun, they could snap and break, leaving the guests vulnerable to hitting their heads as the headrest fails and falls down.

This was pointed out to Panini as a typical way that manufacturers or distributors take advantage of the three-bid system most communities have in place and bet on the board to go for the cheapest bid. This type of inferior production shaves manufacturing costs, giving the ability to win bids in the marketplace. But what the community ends up buying is an inferior product, which, more importantly, leaves them wide open to injury and lawsuits. Quality furniture is produced with solid aluminum ratchet assemblies welded on the headrests to produce the best performance and strength.

Next to be examined were the chaise lounges themselves and the frames were found to have multiple weld breaks. How had this community, like so many others, not kept up on their maintenance? Sometimes repairs are not put in community budgets for various reasons, which subject the community to potential problems down the road. Regular repairs need to be generated on a biannual basis at the very least to keep up on any potential breakage.

One noticeable item of deep concern was that the headrest in the down position was right next to the frame with no gap in between. This is a horrible accident just waiting to happen as fingers can get caught between the headrest and the frame, and, in some cases, even the tips of fingers can be cut off. Most manufacturers do produce their furniture with this safety feature in mind, but it is a vitally important feature to have a good, one-inch gap between the headrest and the frame when buying new. 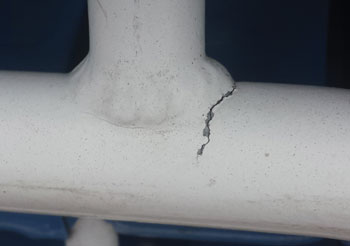 Panini then asked for an examination of the umbrellas and the bases. The base was small and insignificant with no pipe or shaft support, which led to an explanation of “the flying missile umbrella syndrome.” The true reason for what is called the “flying missile umbrella syndrome” is that it starts with the poor choice of an insufficient base. The typical base used and seen on commercial properties are the plastic, sand-filled, lightweight variety, or the steel, rusting monstrosities that make one cringe at the site and provoke a cantankerous, ugly sight of rust on the deck. Another kind of base one sees is closer to correct and is the heavier kind but with rusting, useless hardware that affixes to precisely nothing and whose functionality is rendered useless.

A secondary reason for this syndrome is that many properties do not have the manpower to babysit the pool area with maintenance staff that usually leaves the property by 4:00 p.m. After the staff has left for the day, a pool patron comes along and finds that the sun is just a tad too hot. The patron puts up the umbrella and leaves it up when she exits. With the above-described problems all in place, this sets into motion the awful scene of the “flying missile umbrella syndrome.” A good wind comes up overnight; the next morning, broken umbrellas are strewn around, even sometimes lying in the bottom of the pool! Worse yet, there have been cases on two properties where the umbrellas hit people, which precipitated immediate and expensive lawsuits with one woman having had her jaw broken. 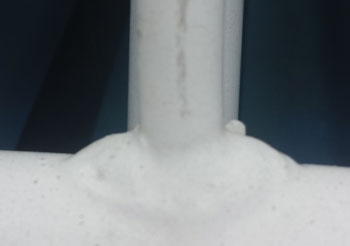 The proper base for any commercial property needs to be at least between 75–85 pounds. This base should be made from cement, and the pole should be centered and adhered in the middle of the concrete snuggly. The screw assembly needs to be stainless steel so that it can lock in tightly against the umbrella pole that is inserted inside the base pole.

Umbrellas themselves should be fabricated with a strong, fiberglass rib—not the skinny kind that some manufacturers profess is good enough—because the fatter rib is ideal. The covers should always have a wind vent to minimize upward drafts. These umbrellas are usually available in a seven and a half foot and a nine foot span. Covers should be made from a fade-resistant, heavy-duty awning fabric. You may have to replace the covers of course in five or six years, but following these guidelines should produce for you quality control in the umbrella arena and continuous umbrella repair minimized greatly.

There is no greater feeling than to see the relief and happiness in a board member’s eyes after meeting, discussing, and evaluating the state of the community’s patio furniture. Now that Panini had some patio furniture knowledge, he could move forward with his board and had plenty to discuss with them.