It has been said that technology has denied many of us a sense of privacy, and certainly that may be said of online participation in social media platforms. When it comes to our own homes, however, many consider that space to be our last refuge from prying eyes. There is an old saying, “Good fences make good neighbors,” but that may not be enough if your neighbor mounts a camera on his roof to look into your yard. The Florida Third District Court of Appeals (that hears appeals from trial courts in Miami-Dade and Monroe Counties) ruled in Jackman v. Cebrink-Swartz, 46 Fla. L. Weekly D1246, that a camera that was positioned to peer into the private space adjacent to their neighbors’ home was an invasion of the neighbors’ privacy.

After a number of disputes between the Swartzes and the Jackmans, the Swartzes installed a 25-foot-high rooftop camera on top of their house. The camera had night-vision capabilities, recorded 24 hours a day, seven days a week, and was positioned to see over the Jackmans’ privacy fence, allowing the Swartzes to see into a portion of the Jackmans’ backyard and the edge of their lanai. The Jackmans objected to what they saw as an invasion of their privacy and sued. 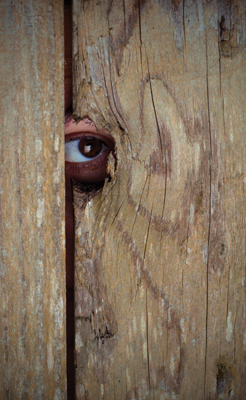 The court held that the tort of invasion of privacy is comprised of several different forms. Intrusion upon seclusion is defined as where a person “intentionally intrudes, physically or otherwise, upon the solitude or seclusion of another or his private affairs or concerns … if the intrusion would be highly offensive to a reasonable person.” The court held that there is a reasonable expectation of privacy within the curtilage (generally considered the area immediately surrounding a dwelling) of a residence, and the court concluded that there is a material difference between occasionally viewing the activities within a neighbor’s backyard that are observable without peering over a privacy fence and erecting a camera to see over a privacy fence to thereafter surveil and record those activities on a consistent basis.

While the court was unequivocal in its conclusion that the position of the camera in this case—peering over a privacy fence into the curtilage of a neighbor’s backyard—was dispositive, the court recognized that due to the proliferation of home surveillance cameras and drones, there is some uncertainty about what surveillance activities may be maintained without resulting in an invasion of privacy of another person. The court certified to the Supreme Court of Florida the following question as one of great public importance:

Does the use of a camera by a private citizen to monitor and/or record activities occurring within the curtilage of a home surrounded by a privacy fence not belonging to the camera operator constitute the tort of invasion of privacy—intrusion upon seclusion?

We shall see if the Supreme Court answers the certified question. In the meantime, this case may assist property owners whose neighbors’ prying eyes have gone too far.

Keith F. Backer, Esq., is a partner of Backer Aboud Poliakoff & Foelster, a law firm serving community associations in Palm Beach, Broward, and Miami-Dade Counties. The Firm was founded by Mr. Backer, a Florida Bar board certified specialist in condominium and planned development law with more than 35 years of legal experience in Florida. The law firm was created to provide community associations with the highest quality legal services with a degree of personal attention often difficult to obtain at larger firms. For more information on Backer Aboud Poliakoff and Foelster, call (800) 251-3562, email kbacker@bapflaw.com, or visit www.bapflaw.com.