Asphalt Restoration Technology Systems Inc. (AR Tech) celebrated its tenth anniversary under owner Connie Lorenz in 2017. Lorenz began work in the asphalt business in 1999, and when the opportunity to buy the business presented itself in 2007, she was eager to proceed. She changed the name and established AR Tech, headquartered in Orlando. “Our primary services are asphalt rejuvenation and maintenance, but we’ve also branched into consultation,” Lorenz shares. “That may even break off into a separate entity because people really need help when it comes to overseeing paving projects.” 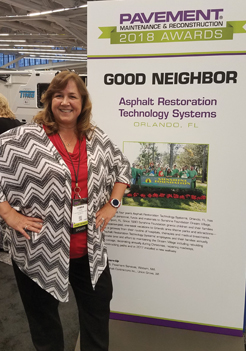 Starting with six employees, the company has now grown to 14. Lorenz states, “Part of my philosophy is that the business starts with the team.  I was an employee for many years and didn’t always work for the best leaders, so I learned what I would not do if I got into leadership. Because of that, my team is like my family. At the beginning, we were like a band of misfits—we had a firefighter, a drywall installer, a landscaper, a builder, a concrete worker, and a florist, but we came together and made an asphalt company.  When I had a family tragedy in 2014 and stepped away, I found that I had a company that runs itself.  My team stepped up—that’s how great they are. They carried on with the same philosophies: Do the best job you can.  There is no reason to take advantage of anybody. It costs twice as much to do a bad job as a good job. There are no shortcuts—usually.

“We try to bring that to the table and educate people before they make decisions,” says Lorenz, as education has been a primary focus of her service. “We want the project to be worth the investment.  Some paving companies do a hit-and-run job, and when it doesn’t work, we’re the messenger who brings the bad news of why it went bad.”

Lorenz finds advantages to working with associations—“I’m frugal, and that matches with community interests,” she acknowledges. However, her frugality is the least money over time, which may not be the cheapest initial outlay. “I found that in cut-throat commercial projects they don’t care about the quality, but I have quality that can double or triple the life of the road.” For folks who will be using and paying for those roads over time, that can have a broader appeal.

Another advantage—usually—is working with a known population.  “It’s one thing to move 1,000 residents; you know where to send the notices,” Lorenz points out. “At a mall, no one agrees to shut down their business for a project.” 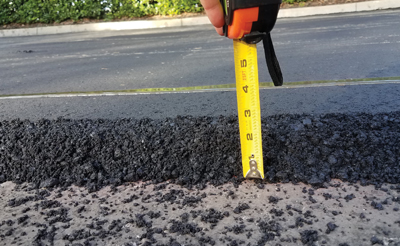 However, communicating with communities can be a challenge. Lorenz notes, “Since the recession, there are more investors/renters, so it is harder to get information about moving vehicles or redirecting irrigation to the proper person.” And there are always those who don’t understand, though Lorenz estimates that only two to three percent of the residents create issues. She shares, “Once I told a lady she would need to move her vehicle, and she said, ‘Oh, no, I’m a renter.’ Also, communities often don’t know the consequences of their decisions. Sometimes when they put up gates, concrete inverts, or other projects, the results aren’t evident until well after the contractor’s legal responsibility is past.”

Lorenz’s advice to communities starts with, “Don’t use the company that you’ve never heard of from another state. Use a Florida registered business.  And if they say they don’t do repairs, they aren’t really an asphalt company.” Lorenz advises, “Do a lot of vetting and ask uncomfortable questions. I tell communities to get two good references and one bad reference. The bad reference is to show that if someone had an issue, they took care of it. And, trust your instinct in dealing with contractors. If the lowest bid doesn’t feel right, there may be a real reason for that trust issue.”