Can a Florida community association adopt rules prohibiting use of the clubhouse for political events? Generally speaking, the board can adopt such a rule, but there are statutory exceptions which provide for the right of the members to peaceably assemble and which allow for the invitation of public officers and candidates for public office to speak in common areas. More specifically, §720.304(1), Fla. Stat. (i.e., the Homeowners Association Act), provides the following:

With these statutory rights in mind, should an association member invite a candidate for political office to speak, the association must allow use of the clubhouse or other common area for the candidate to address the members. If members peaceably assemble and discuss today’s political events, that, too, seems to be a statutory protected right. However, if a political group requests use of the clubhouse to host an event in support of a candidate or political party, then it likely could be prohibited except that the candidate would still be permitted to speak and every association member would be allowed to attend, even those who may desire to protest.

If a rule adopted by the association prohibits the use of the clubhouse for political events and if legally challenged by an upset member, while it is difficult to predict the outcome, the court will need to balance the reasonableness of the board’s adopted rule as compared against the statutory protection. It should also be kept in mind that, if your association was created prior to the legislation protecting a political candidate’s right to speak, and the declaration does not contain a provision adopting the legislation through “Kaufman” type language (meaning it’s as if the legislation was adopted into the declaration), then such an association has an argument that such substantive legislation does not apply. (These rights came into existence on the following dates: October 1, 1977, for condominiums and cooperatives and April 1, 1992, for homeowners associations.)

Association rules governing and even completely prohibiting political signs are a different matter. Let’s face it, unless you share similar political views, your neighbor’s front yard sign supporting a favorite political candidate may be upsetting. Can a Florida association demand the sign’s removal? Well, not if the association has not yet adopted rules governing signage in the community.

A well-crafted and properly adopted board rule prohibiting all signs, as compared to just prohibiting political signs, is likely enforceable with this caveat. Section 720.304 of the Homeowners Association Act provides that any parcel owner may display a sign of reasonable size provided by a contractor for security services within 10 feet of any entrance to the home. In examining an association’s “no sign” rule, let us first address the argument heard every four years, “This is America! The First Amendment protects the right of all homeowners to display political signs.” Wishing this to be true will not help. In fact, the First Amendment concepts of freedom of speech and freedom of expression certainly apply to government settings. But, where the application of the United States Constitution First Amendment begins and ends as applied to Florida’s community associations is anything but clear. As such, the First Amendment could act as both a shield and a sword. 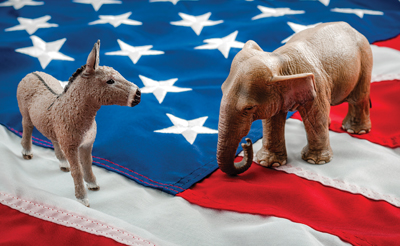 Community associations are not governmental; though admittedly they govern, they have no nexus to local or federal government. In 1987, the Florida Supreme Court held, in Quail Creek POA v. Hunter, 538 So. 2d 1288 (Fla. 2d DCA 1989), that neither a homeowners association’s recording of its covenants in the public records nor the enforcement of its covenants in state court created a sufficient nexus to evidence “state action” such that the First and Fourteenth Amendment would apply. With that in mind, any homeowner would be hard pressed to argue otherwise. But, should an association adopt a rule prohibiting one type of sign but allowing other types of signs, then notwithstanding the arguments that the First Amendment does not apply to community associations, this creates an argument that the association is regulating the type and manner of speech and thus, might, inadvertently be leaving room for a First Amendment type argument to be used against the association.

Courts have long since held that owners give up certain liberties when living in a community association. In 2002, the Florida Supreme Court held, in Woodside Village v. Jahren, 806 So. 2d 452 (Fla. 2002), that certain individual rights must be compromised when one chooses to live in a condominium association.

With that as our backdrop, any “no-sign” rule should be artfully drafted to help ensure enforceability. There is no margin for error. The dispositive court cases regarding rule enforceability make clear that a sign restriction must be “clear and unambiguous” to be enforceable against an owner. Remember, a basic principal of contract interpretation is that ambiguous terms are held against the drafting party. As a practical matter, in plain English this means that in the event the rule is even slightly confusing, the homeowner will receive the benefit of the doubt. Also, any covenant or rule must be applied fairly to avoid selective enforcement rebuttals; so, if Dorothy the Democrat is told to remove her lawn sign, so, too, must Roger the Republican be similarly told. Remember, too, that as a general rule, courts favor covenants adopted by the membership over rules adopted by the board; meaning, the former serves to increase the association’s chances of prevailing.

That rules prohibiting signs must be artfully drafted was a point made very clear to the homeowners association in Shields v. Andros Isle Property Owners Association, Inc., 872 So. 2d 1003 (Fla. 4th DCA 2004), in which the Fourth District Court of Appeal of Florida decided in favor of the homeowner who displayed a sign in her car window despite the association’s sign prohibition. The association’s rules prohibited the display of signs “on any lot”, except a “for sale” sign of a certain size, and prohibited signs on a vehicle. The Court, using the definition of a “lot” in the association’s declaration, interpreted these rules to mean that no sign, except a “for sale” sign, may be on the land or on the exterior of a vehicle. However, there was no prohibition for signs displayed from within a vehicle. When ambiguity exists, courts will rule in favor of the non-drafting party. In this instance the association is deemed the drafter of the rule, so therefore the ambiguity was held against the association, which worked to the owner’s benefit.

Consider, too, election season is short. By the time a lawsuit for an injunction to enforce the “no-sign” covenant is fully resolved, it might be time to consider the next presidential candidate! Please be sure to consult with your association’s attorney when considering new or modifying existing rules and regulations.