“MetroWest was built in 1986, and we just celebrated 30 years last year,” explains Sanchez, who has been with the community since 2009. “The community covers 1,805 acres and includes more than 10,000 homes plus more than 600 commercial/retail mixed use spaces. In the last couple of years, the community has moved out from under the control of the developer. Being able to make our own decisions and have control of our own destiny has been a big change!”

As a master-planned community, MetroWest already offers many benefits, according to Culpepper. “The community is conveniently located to so many places. There is something for everyone, and everything is readily available within the community. It’s a dynamic, friendly atmosphere with miles of scenic walkways, shopping, a golf course, and other amenities. Plus, it’s beautiful and has won awards for the lush landscaping.”

Coming when she did, Sanchez initially faced the impact of the recession on the association, which is composed of 129-member groups. “We had a few pages of delinquencies until we put processes and procedures in place. We focused on the issue and established relationships,” she explains. “We verbally contact members who are behind in payment and try to have a point of personal contact, not just the official mail notice. All payments are pursued within the month they are due; at the 10th day, a demand letter is sent, and at the 20th, the account is in collection. There are zero delinquencies now.”

However, people are Sanchez’s biggest priority. “My biggest impact is through relationships and caring about people,” she shares. “The community slogan was ‘Live, Work, Play.’  When I came, we added ‘Connect.’  Relationships are probably the biggest impact you can have.”

“The public safety initiatives and connecting the community are my major accomplishments,” Sanchez states. “Our tagline is, ‘A connected community is a protected community.’  Much of our budget is aimed at connection—how we help people know their neighbors, get involved in community activities, and be aware of what’s happening from a public safety standpoint.”

To facilitate MetroWest’s goals, Patterson-Bach Communications Inc. was brought on board five years ago, and Betsy Culpepper of that firm began working with MetroWest two years ago. “Our main goal is to promote MetroWest as a great place to ‘Live, Work, Play, and Connect’ through events and communication. Every day is different!” she comments.

One piece of that plan is promoting events. “We ensure that the branding is consistent—that collateral pieces match and have the same look and feel. We let residents know that what’s going on is exciting, fun, and free.”

Sanchez reports, “The two anchor events are our WinterFest and MusicFest. WinterFest is geared to families and had an attendance of around 5,000 people last year. Aimed more at adults, the music festival has grown from hundreds to around 3,500 attendees. Both events were held at the MetroWest Golf Club.” 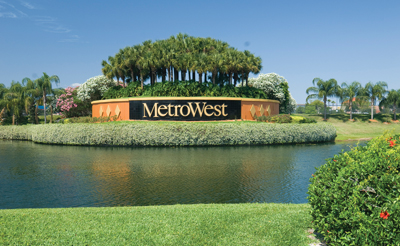 Culpepper adds, “At WinterFest we show an outdoor movie, and last year we had the characters Santa, Mrs. Claus, the Grinch, and Cindy Lou Who since we showed How the Grinch Stole Christmas. There is a snow slide, outdoor skating rink, face painting, exhibitors, and food trucks, so there is a lot of variety. At Music-Fest we have different genres so there is something for everyone.”

“We won first place in Orlando for our National Night Out in 2012,” reports Sanchez. “Then we revamped our approach to focus on community events and skipped that for two years. But, we realized that it has value, and we brought it back in 2016 and had around 1,500 people attend.”

The annual realtor tour is designed to promote the association within that sector. “It’s great to tell about the community, but it’s stronger to show it and make sure our local realtors know what’s going on and changing,” relates Culpepper.

MetroWest has pursued a strong public safety and communication program to deal with both the occurrence and perception of crime in the community. “We have alliance meetings with the managers of the member associations to share information,” according to Sanchez. “We are having people get more involved with committees. The public safety team does walk-and-talks throughout the community, walking communities to help meet, greet, and introduce neighbors to each other and share what is happening in the surrounding area. If there are incidents, we educate residents on what really happened rather than letting stories travel. It helps tremendously to get the truth out to the community and media as well.”

“The public safety team is active through partners Critical Intervention Services—interacting with people one-on-one,” notes Culpepper. “They look at lighting, signage, and other ways to make the community secure.”

“Though we look at crime stats and hot spots, we measure our progress by how we are connected, how many kids we’ve talked to, and how many people we’ve contacted. With a statistic like the number of calls to 911, we want people to call,” says Sanchez. “It’s a preventive measure, and we want more people involved and calling. Even actual crime statistics can be misleading because a crime might have happened at work, but they report it from home.

“As the master association under the public safety umbrella, we have mandated leasing standards that include background checks and the crime-free addendum included as part of crime-free certification by the city of Orlando,” explains Sanchez. “At the front end, we’re addressing who’s coming in and out of MetroWest. Apartment leases were usually covered the most clearly, and condominiums were more involved than HOAs, but we had to ensure that everyone who rents out a home, condominium, or apartment at least requires a background check, checks ID (including internationals), and implement the crime-free addendum. That basically provides notice that if you or anyone you are associated with is engaged in criminal activity, you will be evicted. Trying to get everyone to have a minimal leasing standard in HOAs has been a challenge.

“HUD has issued guidelines regarding protected classes and discrimination against those, but complying is really about enforcing consistent policies and procedures in your leasing approval process for all communities,” states Sanchez. “We have changed the criteria to look for a felony conviction, not just an arrest. Problems occur when the approval process is not consistent, maybe in approving a family member who may not meet all of the standards/criteria set forth by the community.”

“It’s too soon to see results from the new leasing standard since it’s just been in effect about a year,” reports Sanchez. “We’ve had at least 30 workshops plus individual meetings to implement this, and now 95 percent of the community is involved. It will be a benefit to see results after collecting data on the front end.” 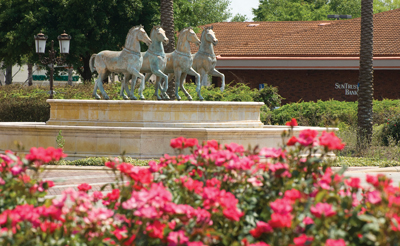 Communication is the theme behind much of the association’s public safety and community progress. Culpepper is involved in writing and creating layouts for the quarterly MetroWest CONNECT newsletter, published in partnership with one of the local newspapers. She advises, “We have found the one-on-one contact by the public safety team to be most effective, but you have to have communication at multiple levels. It takes the newsletter, an active Facebook page, and email blasts to reach everyone. You have to be consistent and continue communications to educate and reach the entire community.”

Sanchez observes, “Culpepper and Patterson-Bach have helped develop the website and helped develop a uniform, cohesive brand for MetroWest. You can visibly see the changes in monuments, wayfinding signs, and beautification, in conjunction with landscaping improvements. Whatever is going on in the community, they are at the forefront giving good news for MetroWest.”

Turnover from the developer in 2014 has enabled the MetroWest members to shine on their own. Their signature project thus far has been a $1.5 million irrigation/landscaping upgrade. “They have done a wonderful job,” observes Sanchez. “You can tell when you enter and leave MetroWest. With the irrigation upgrade, you can keep the plants green and also conserve water. The medians and areas around some monuments have had plant material installed, and landscaping through the community has been enhanced.” 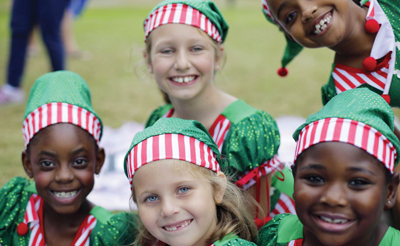 Both Culpepper and Sanchez are invested person-ally in MetroWest and its success. “Betsy goes above and beyond her contract and invests time beyond what is required,” says Sanchez. Regarding her role, Sanchez comments, “This is not just a job. I want to make a difference. Relationships are the biggest impact you can have in a community. Those are force multipliers because you want to do more when there’s a relationship there. You can get a lot more accomplished than trying to get it all done by yourself!”  As communities always find, behind the pictures and statistics are people making it happen.