Positano Place at Naples, a 330-unit condominium, was launched near the crest of housing values in 2006. Manager Jack Hedenstrom bought his home during the community pre-construction and recalls, “Actually, this started out as an apartment complex, but before construction was finished, the developer changed it to a condominium—probably because condominiums were such a hot item then.”

The garden-style community includes 15 buildings, with views of the two lakes and a preserve area. “The pool is the showcase of the community,” notes Hedenstrom. “The developer did an excellent job with the clubhouse and pool. In season, there are 100 chaise lounges out there, and they’re all full, so people start bringing their own furniture. It’s a very popular place from January to March.”

The four sub-associations and the master association were turned over from the developer from 2006 to 2008—“It was built fast and sold fast,” according to Hedenstrom. This was followed by an equally precipitous immersion into the intrigues of foreclosures and construction deficiencies.

“We realized this was the developer’s first foray into condominiums, and about 30 homeowners put in $500–$1,000 each to hire an attorney and go after the developer,” Hedenstrom explains. “There were a number of cosmetic items of concern. After we had an engineering study in 2009, we filed a lawsuit for construction defects. There were air conditioning wiring issues, roof discoloration, and windows, which were not hurricane resistant, but the main issue was the open corridors, which would hold standing water if there was a driving rain. That suit was finally mediated in 2014, and half the proceeds were used to install roof structures to protect the walkways.”

The concurrent sinking of the housing market also impacted the com- munity and Hedenstrom reports, “Foreclosure notices were arriving weekly in 2009. I had been serving as board president, but I resigned that position and became manager. Though I had 35–40 years of management experience, foreclosures were new to me. I taught myself and used our paralegal to deal with about 85 foreclosures those first two years. A total of 133 foreclosures were recorded in the Collier County records while the board and management went into crisis mode.” 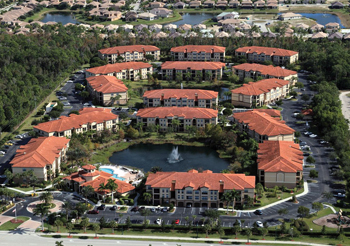 Since prior management had not kept track of the residents living in the association, Hedenstrom tackled a backlog of missing information. “For the first two years, all I did—morning, noon, night, and weekends—was try to figure out who owned units and who lived in them. To research owners and deeds, I would go to the county clerk’s property appraiser’s website and also Sunbiz.com, because some units were owned by LLCs or corporations,” he recalls.

“We used the annual fire inspection as an opportunity to find out who was living in units,” Hedenstrom states. “The maintenance supervisor and I got a listing of vacant units, many of which were without power and were developing mold issues. We paid Florida Power and Light and ran air conditioning in those units to stop the mold, and we inspected all vacant units on a monthly basis.

“The biggest help in finding out who was here came from hiring a security company to boot vehicles that did not have a resident or visitor parking permit. That’s what really got people into the office,” Hedenstrom reports. “The prior management had not enforced our leasing requirements, so we had tenants that weren’t paying their landlord, and the landlord didn’t care because they’d walked away from the property. Even before Florida adopted the law for tenants to pay rent directly to the association if fees were delinquent, we had it in our leasing agreement that the owner and tenant both signed. Once we identified them, the tenants were required to pay us.”

Crime was also an issue when unidentified residents were living on the property. Since many of the owners were out of the picture, the association worked closely with the sheriff’s department and also used their attorney to evict residents violating laws. To minimize future issues with tenants, Hedenstrom explains, “About four years ago, after the foreclosures were under control, I started personally interviewing every new tenant. I explained that this is a deed-restricted community, and if you don’t like following rules and regulations, then perhaps this is not the community for you.”

Cable services were paid by the association, so paying for that service for owners who were not paying fees was a drain and an aggravation. “We tried to convince the cable company to turn off service to the units that were not paying, but they refused,” says Hedenstrom. “However, the contract was entered into by the developer, and developer contracts can be canceled in Florida after turnover. It was suggested that cancellation needed to be within a year, but our lawyer realized that the original contract was with the ‘Monte Carlo Condominium Association’ (a proposed name that was changed), so he took the position that they needed to show a contract with Positano Place, which they couldn’t do. The board removed the bulk service agreement from the budget and gave owners a choice of satellite or cable television at their own expense, trimming $98,000 from the budget.

“Water and sewer bills, also paid by the association for all units, fluctuated tremendously during this time, for whatever reason,” recalls Hedenstrom. “It may have been the number of people living in the units or possibly leaking fixtures, but now it has stabilized.”

To cut expenses, employees and vendors were asked to take a pay cut, which most agreed to. Two employees were laid off, and responsibilities were added to the remaining workers, but Hedenstrom notes, “Our employees are here long-term. Wages are now above the prior levels, and the board treats them quite well. A couple of board members helped out with maintenance, and one still con- tinues to. Most of the contracted vendors took a five percent cut, and the landscaping contractor agreed to a 10 percent reduction. They have been with us since day one and remain loyal vendors.”

Trash costs soared with the high tenancy, providing a ripe opportunity for recycling. “I’m a tree hugger,” confesses Hedenstrom, “so I pushed for recycling. We started with totes, but it grew to be unmanageable. The board realized that recycling could save significant costs in garbage compactor expenses and created a recycling area to accommodate six, six-yard recycling dumpsters, eventually reducing the garbage/trash expense by $1,000 per month. The payback period for that investment was under a year, and we were able to reduce emptying the compactor from twice a month to only once.”

With the board looking under every stone for savings, garage units were foreclosed on, or, in some cases, were deeded by the owners in lieu of foreclosure. “As separately deeded pieces of property, the garage units were not encumbered by most mortgages,” explains Hedenstrom. The association also took title to seven homes, which were rented to generate revenue.

In 2010, the board met with State Representative Kathleen Passidomo and explained the plight of associations, which was created by banks delaying foreclosure. According to Hedenstrom, “She agreed that this needed to be addressed and was very successful in helping us go after banks. She introduced HB 87 in 2013 and tried to pass another bill this year, though it didn’t get out of committee.”

Hedenstrom credits the strong board with taking the steps needed to keep the property from receivership—a threat that loomed at the height of the foreclosures. “The community was extremely fortunate to have board members with corporate management backgrounds, including two CPAs and three banking executives, all with extensive fiscal management expertise. Of the original board members, four or five are still serving,” says Hedenstrom, “so there’s been a lot of commitment.”

The board budgeted for bad debt and was able to pay all vendors on time and fund required minimum amounts for reserves—even though member receivables across all four sub-associations topped $1,000,000 at one point. “The developer had overfunded the budget originally, so we actually lowered assessments for five to six years even with budgeting for bad debt,” according to Hedenstrom. “There were no special assessments, and more money is now being put in reserves.”

With financial stability, the community has proceeded with improvements and maintenance. “We have had a number of landscaping projects, since shrubs have a life of 7–10 years,” comments Hedenstrom. “In 2010, the buildings were painted, the parking lot was seal-coated, and the pool was resurfaced. We recently painted our fence around the pool and along the frontage of the property. Currently, we are addressing an erosion issue at the lakes by burying the building downspouts so they don’t create runoff.”

Social life at Positano Place continues to thrive, with an active social com- mittee planning events for October through May. “We’ve even had complaints that there are too many events,” remarks Hedenstrom. “One of the largest events was the St. Patrick’s Day party with a DJ, but ice cream socials and pot luck dinners are also favorites.”

As the financially macho might observe, “What doesn’t bankrupt you makes you stronger.” By 2013, the association had no foreclosures filed and has been able to focus on progress. Bill Ciampo, who moved to the community one-and-a-half years ago, observes where the community is now: “I’m relatively new to Positano and have only been on the board for a few months. What I’ve learned, and what I’m impressed with, is the dedication of the board members and their unwavering effort to do what’s in the best interest of the entire community. Positano is run by the book—and by people who genuinely care about our community. The result is a beautiful, well-kept living environment for all who reside here.” The entire community has benefited from the diligent management through tough times at Positano!