Does Your Insurer Provide Coverage

A major storm, like Hurricane Ian, often includes high winds and heavy rains, and either can cause damage to your property. Commercial policies typically include coverage for wind and rainfall that act in conjunction. What most commercial policies do not cover is flood damage. Flood damage is typically covered by flood insurance through the National Flood Insurance Program (NFIP) under the Federal Emergency Management Administration (FEMA). 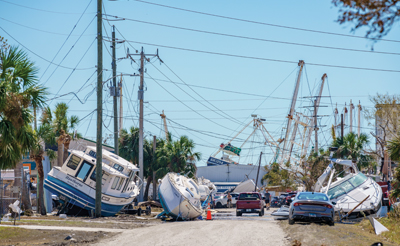 Your flood insurance policy will only cover physical damage caused directly by a flood. Conversely, your named peril policy will cover fire, lightning, windstorm, or hail. As discussed earlier, rainfall may be a covered event under your policy if wind propels the rain into a covered property. This is referred to in the insurance industry as wind-driven rain. The same is true if wind causes damage to your roof and water enters through the ceiling. However, if rainfall causes flash flooding that enters your property, this will not be covered by your wind policy but instead by your flood insurance. If you do not have flood insurance, your policy will have a disclosure that will say the following:

Now you will be asking, so what happens next? After a storm like Hurricane Ian, insurance adjusters from around the country will come to inspect the property and complete a line-by-line estimate of the damage. These areas include the structure of the building, the roof, and the common areas for a commercial policy. Any damage that extends from the “walls-in” falls within the purview of the individual unit owner’s insurance policy. As the Florida community has witnessed, flood damage can cause catastrophic amounts of damage that permeate throughout the entire property. When the insurance adjuster detects that a question may arise as to which peril caused the damage, a structural engineer is hired to determine the source of specific losses. Structural engineers may determine that a certain area falls under your wind policy rather than flood.

THIS POLICY CONTAINS A SEPARATE DEDUCTIBLE FOR HURRICANE LOSSES WHICH MAY RESULT IN HIGH OUT-OF-POCKET EXPENSES TO YOU.

THIS POLICY CONTAINS A CO-PAY PROVISION THAT MAY RESULT IN HIGH OUT-OF-POCKET EXPENSES TO YOU.

At this point, the insurance adjuster will begin denying portions of the claim related to flood. If your community has flood insurance, this will both cover and offset the damages not covered under the wind policy. However, when neither an insurance adjuster nor a structural engineer can determine the source of damage, this creates a dead zone in the coverage where neither policy will elect to cover the damage. For example, if there is damage to the property that is caused by wind-driven rain and flash flooding concurrently, the insurance adjusters will deny that portion of the claim arguing that the other insurance policy should cover those portions of the claim.

This is a source of extensive litigation that requires the intervention of the court system if neither the insured nor the insurer can come to an agreement as to the specific cause of loss. Navigating this process requires a high level of skill and experience. For this reason, it is paramount to have an attorney before your association reports a claim until the settlement of that claim.

At WindyLaw.com | Larry Moskowitz, PA, our office has a vast array of professionals ready and willing to assist any community association that has suffered from Hurricane Ian.

All our consultations are always free. If we don’t recover—the client owes us nothing: no costs, no fees. “Property Damage Isn’t Just What We Do—It’s ALL We Do!

Larry Moskowitz has practiced law in Florida for more than 30 years, beginning his career as an assistant state attorney/prosecutor in Broward County, FL. He is an accomplished attorney who has handled thousands of civil cases with over 150 trials to verdict.
Mr. Moskowitz has extensive experience handling and litigating property damage claims.
He has handled catastrophic claims involving the BP Deepwater Horizon oil spill in 2010 and Hurricanes Wilma (2005), Matthew (2016), Irma (2017), Michael (2018), Laura (2020), Sally (2020), and named storm Eta (2020). Larry is a member of the Florida Bar, Northern District of Florida, Middle District of Florida, and the Southern District of Florida. He is an active member of the Florida Justice Association, FAPIA (Florida Association of Public Adjusters), and APA (American Policy Holders Association). Contact him at larry@WindyLaw.com or 954-797-7990.