If your community association installs a holiday display, is that holiday display considered religious or secular? Are Christmas trees, menorahs, Nativity scenes, or the Kikombe cha Umoja (the Unity Cup used during Kwanzaa celebrations) considered religious or secular? How can you tell the difference? Why is the difference so very important to understand? The reason it is important to understand the difference between a religious versus a secular display is that if your association does have a religious display, and a member makes a request to have a holiday

display for their religion too, the association must honor the request in order to avoid a claim of religious discrimination. But, if the holiday display is secular, such obligation does not exist.

Fortunately, we have guidance from the United States Supreme Court to help associations differentiate between secular and religious symbols and displays. In the 1989 case of County of Allegheny v. American Civil Liberties Union Greater Pittsburgh Chapter, 492 U.S. 573 (1989), the Court held that the determination of whether decorations, including those used to commemorate holidays (which are or have been religious in nature), are religious or not turns on whether viewers would perceive the decorations to be an endorsement or disapproval of their individual religious choices. The constitutionality of the object is judged according to the standard of a reasonable observer.

Thus, the Court found that a Christmas tree, by itself, is not a religious symbol; although Christmas trees once carried religious connotations, “Today they typify the secular celebration of Christmas.” The Court also noted that numerous Americans place Christmas trees in their homes without subscribing to Christian religious beliefs and that Christmas trees are widely viewed as the preeminent secular symbol of the Christmas holiday season. 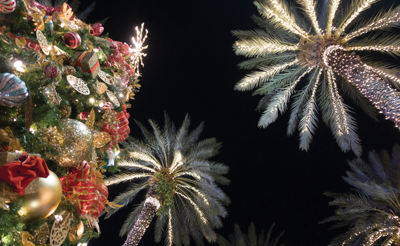 In contrast, the Court stated that a menorah is a religious symbol that serves to commemorate the miracle of the oil (lasting eight days when it should have only lasted one day) as described in the Talmud. However, the Court continued that the menorah’s significance is not exclusively religious, as it is the primary visual symbol for a holiday that is both secular and religious. When placed next to a Christmas tree, the Court found that the overall effect of the display, to recognize Christmas and Chanukah as part of the same winter holiday season, has attained secular status in our society. Therefore, we can conclude that a Christmas tree and menorah, side by side, are of a secular nature.

If a member of your community wants to include their religious symbol in the association’s holiday display, remember to consider the types of symbols already being displayed by the association as compared to the member’s request. Once your community displays a religious symbol, then there is a good chance your community will need to allow other requested religious symbols to avoid a claim of religious discrimination. Use the guidance from the Supreme Court’s cases to differentiate between a secular symbol and a religious symbol. With that in mind, if an association allows a Christmas tree and menorah, the board of directors, far more likely than not, would not have to grant a member’s request to display a Nativity scene and the Ten Commandments. The rules of kindergarten work best: treat everyone fairly, and treat them as you would want to be treated.

Attorney Jeffrey Rembaum has considerable experience representing countless community associations that include condominium, homeowner, commercial, and cooperative associations throughout Florida. He is a board certified specialist in condominium and planned development law and is a Florida Supreme Court circuit civil mediator. Every year since 2012 Mr. Rembaum has been inducted into the Florida Super Lawyers. He was twice awarded as a member of Florida Trend’s Legal Elite. Kaye Bender Rembaum, P.L., is devoted to the representation of community and commercial associations throughout Florida with offices in Palm Beach, Broward, Hillsborough, and Orange Counties (and Miami-Dade by appointment). For more information, visit kbrlegal.com.