An Association’s Experience, Lessons, and Advice

There are few topics at association meetings that bring out tension and emotions the way that security can and often does. We’re not talking about the simple “add a camera here” or “upgrade this widget there.” This is a discussion about a complete system overhaul or enhancement; the kind that takes time, research, and a strong board. Perhaps, though, it is those long hours, analysis, and dedication of board members that make the transition to a new system a successful one.

Those factors alone might intimidate some, but not Hugh McFadden, the board president for a community of almost 250 homes in Indialantic, Florida, or his fellow board members. Looking back on the months he has spent to improve the security of his community, he eloquently and honestly speaks to the experience and lessons learned throughout this process. McFadden admits that as he signed the paperwork with his new security provider, one of his first thoughts was, “Is it going to be overly burdensome?” Perhaps it could have been, but the board was prepared.

Before we can look at how this community implemented new security, it is best to start with why. Every community’s “equation” is different, and for McFadden’s association it began with the fact that the existing security infrastructure was failing. Many components were obsolete and nearing their end of life. Pedestrian gates had padlocks because the system was no longer functional; cameras were down or providing footage with such poor quality it could rarely be used. This “need to recapitalize initiated the start to look at systems,” says McFadden.

Over the course of many meetings and forums, the board investigated a full spectrum of improvements. From a simple replacement of expired cameras and barrier gates to a complete change with a coherent, virtual solution, McFadden explains, “It becomes an endless set of options when you play with the variables.” Ultimately, the board decided they needed to maximize value in their new system.

Although they had come to that conclusion, the work was far from over. In addition to deciding how and where technology would be implemented in the community, the board was simultaneously battling the question of cost versus the concern of complexity from community members. Knowing that certain demographics would need to adjust to the complexity of adding virtual solutions, the association continued hosting forums to take questions and talk through concerns.

This leads to McFadden’s number one piece of advice on this topic—awareness. In most cases, residents are unaware of how a system is functioning on a property, or in this case, how equipment was primarily not working. For McFadden and the board, it meant explaining to residents what the change means, why they have to do it, and providing actual proof. They had to dedicate time “helping people realize the need due to the problems that exist…systems had failed and people didn’t know,” says McFadden.

Furthermore, he adds, “That communication has to be from the board.” Over the course of these forums, the sales team for the proposed security provider had little involvement in meetings with residents. The board believed that they had to speak to the reality of the situation, and even that only convinced a portion of community members. 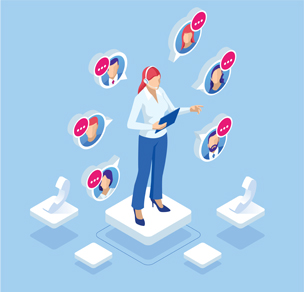 Along with awareness, McFadden speaks to the amount of time that is required for such a project. His community spent 18 months regularly discussing the options and potential systems. While their process was likely extended because of the COVID-19 pandemic, McFadden says a board should still plan on it taking a year if you do it properly. In fact, for the first three community forums, he says almost no one attended. As the conversations continued and the board came closer to a decision, the meetings started to get packed. “You have to be willing to invest the time to walk people through it. Host forums, have the phone calls, answer emails…” says McFadden.

That time and dedication is largely in part to having the right “mindset” according to McFadden. It’s an understanding of where emotions, opinions, and questions of residents are coming from and being willing to walk people through the changes step by step. McFadden and other board members even made personal house calls to help their neighbors, knowing that different demographics need different assistance, especially during current circumstances. Having that mindset, though, McFadden says, “changed people’s opinions. It made them comfortable.”

In addition to McFadden and the board’s willingness to communicate with residents and help where they were needed, the security company the community selected also provided a team to help with the transition to the new systems and technology. This team assisted the community with many of the components involved in installing a new security system, and it was that role that McFadden says was integral in bringing the project full circle. “The idea of having a transition manager truly managing the community into a successful ‘Go Live’ is critical to success and a good experience,” he explained.

Before the undertaking of transforming community security or anything similar, McFadden says it’s important to accept that “you will always get a lot of push back” when you change anything. Change is not easy, even when it’s required. However, there is an approach to it that helps with the decision and eventual transition, based on McFadden’s experiences.

First, “Make sure people are aware of why it matters,” and give at least a year for the process. “The tension and dialogue will ramp up,” he says, but boards should prepare early, gather proof, and engage with the residents. Ultimately, that all comes down to dedicated time upfront, during, and after a new system is in place. Be “willing to answer a lot of questions upfront, and be willing to answer a lot after,” McFadden advises. Of course, when possible, partner with a company that is organized and trained in supporting communities through the transition as well.

While the virtual security systems and technology have only been active at this community for a couple of months, McFadden says that in the long run, “…the value is absolutely there.” Although the cost was “fairly high” to get to this point, the board sees that the active monitoring is deterring trespassers at their amenity. They are also capturing footage and vehicle owner information of drivers that damage their barrier gates when tailgating. All of this is helping the association “hold people accountable without having so much burden on the board.” In McFadden’s eyes, when you take the initial results and spread that over years, it “makes it worth all of the invested time.”

Brie Shouppe is the Manager of Business Development & Marketing for Envera Systems. She works closely with the sales and marketing departments to provide best-in-class service to the communities that Envera works with. Envera Systems is an all-inclusive security provider that focuses on the unique needs of communities through technology-based solutions. Using Virtual Guards located at Envera’s operating center, Envera is able to provide Next Generation Security by verifying visitors, monitoring video, managing community databases, and more. Contact info: (855) 380-1274 or www.EnveraSystems.com.