Peck Plaza, a feature of the Daytona Beach skyline since 1973 and the tallest structure on the Eastern Seaboard at the time of its construction, was hit by Hurricane Matthew on October 7, 2016. Though the 30-story condominium was prepared for the storm and ready for remediation against any further damage, they did not fully anticipate the battle to extract insurance payment to proceed with reconstruction.

Manager Greg Foster recalls, “About two days before the storm, the decks were all cleared and ready. Since I was born and raised here in Daytona, I’ve been through dozens of storms, and I like to plan ahead. We put away anything that could fly away in 50–60 mph winds and helped owners prepare to leave because we knew the evacuation order was coming. After telling the owners to leave, there was one couple over 85-years old who had nowhere to go and had limited mobility, and they refused to leave. There was no way I was going to leave these elderly residents, so seven of us ended up staying in the building.”

“We have interior corridors that are air conditioned, and the cooling towers cool each unit. I was told by some former owners that if I would go in the units and shut the bedroom doors and hallway doors, that would alleviate some pressure. I was glad to receive that tip, because even though the exterior is almost all glass, we only lost 31 windows and sliders,” explains Foster. 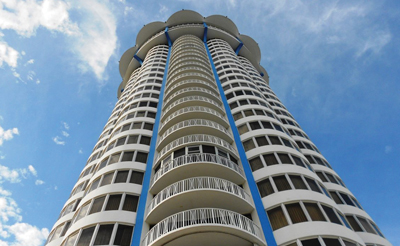 “On Thursday, before the storm hit on Friday, I contacted our service providers. We called two water restoration companies because I wanted one for the association and one for my owners. The association had begun a concrete restoration project in June and had swing stages on the building, so I contacted them to bring plywood if needed,” Foster states. “I contacted our insurance company and said, ‘I want you here as soon as the bridge is open.’  Everybody was in line way ahead of time.”

When the storm hit, there was a surge from half a mile south of Peck Plaza to a quarter of a mile north that swept away the beach poles in that area. “We have a video from our security camera of a wave about six feet tall crashing down our beach ramp exit and flooding 18,000 square feet of lower garage to four feet deep. We found 20 of the 4×4 beach patrol poles, a 1,000 hermit crabs, and two or three shells. One shell has a little slit on top and is now a momento on my desk that people can drop money into,” Foster relates.

“Approximately 60 holes were punctured in the TPO (thermoplastic olefin) roof membrane by debris blowing off the roof—air conditioners and things like that,” recalls Foster. “The building is like a can, so when the top was opened, water ran down the inside. That’s where most of the drywall damage came from. The sliders that were blown out face the corridor door, so water ran across the floor and soaked the hallways, carpet, drywall, etc. But structurally, we are fine. This building will never go anywhere. The concrete is unbelievable, with baseball-sized pieces of granite.”

With the groundwork already laid, Peck Plaza was promptly secured. “In 48 hours, on Monday afternoon after the storm hit on Friday, we had the building boarded and secured,” says Foster. However, their initial encounter with the insurance representatives was daunting. “They walked on the property Monday morning, and I had ServPro there with an 18-wheeler and 100 employees to board up, vacuum, and dehumidify, ripping up carpet left and right. The insurance representative hadn’t even walked in the building yet, but he told the Servpro boss that this was wind-driven rain, so we wouldn’t meet our deductible and they probably wouldn’t get paid. The Servpro guy freaks out—but the crew did continue the work.”

Foster clarifies, “You have to have a separate policy for wind-driven rain, which we don’t have. It’s like flood insurance—it’s not cheap. But, after the representative saw the blown-out windows and holes in the roof, he changed his mind. In about three weeks, they sent $3.2 million for operating money to get going. The problem is that they haven’t given a penny more since then. Our deductible is three percent, or $631,000, and we’ve submitted a claim for close to $10 million.” 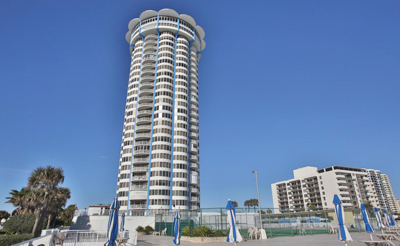 “On November 14, the city of Daytona Beach Shores said that the building was uninhabitable,” according to Foster, “and we still had people staying in the building. We had ten days to move belongings out or we might lose coverage, so we had to scramble. We rented 17 10×10 units for owners and hired movers. Out-of-town owners couldn’t get here in time, so we did what needed to be done to take care of them and their belongings.”

“We had to ‘seal the can’ first before we could proceed with other repairs,” Foster observes. “We just completed the roof repair, putting TPO on, for almost $2 million, so now we’re dry. We will have to comply with all new codes, which will include a new fire alarm system. We’re not going to put up drywall and then knock holes in it to put in new wiring. In the past month, we have continued with the exterior repairs by working through the units rather than waiting six months until we could hang swing stages from the roof. We are now ready for the air conditioning and the cooling tower for the individ-ual units; then we’ll proceed to windows, drywall, carpet, paint, etc. in common areas and units.”

According to Foster, “Homeowners could get low-interest loans from FEMA, but we found out that the Small Business Administration (SBA) will loan up to $2 million to an association. We’re going to borrow that at a very attractive interest rate to bill the owners as little as possible. They already have 14 or 15 months out of their units while still paying maintenance fees—the last thing I want to do is hit them up for $25,000 or add $1,000 per month in fees. Our stipulation is that if an owner sells in the next ten years, he has to pay the balance. We don’t want to carry that expense over to the next owner.”

Unit owners have also been dealing with their insurance agents individually. “Even after it was determined that the building was damaged by a hurricane, not wind-driven rain, 27 of the 100 owners were denied coverage on the basis that it was wind-driven rain and not covered,” notes Foster. “I was told that the CFO of the state of Florida regulates the insurance industry, and I was put in touch with Sharon Daniels. She is an impressive individual, and she had all 27 denials overturned, affecting both local and national companies.”

At this point, insurance is delaying the restoration at Peck Plaza. Foster states, “It’s close to eight months later, and I’ve about run out of the original $3.2 million. That has held up ordering windows, which will take four months to install. We can’t do drywall or any other interior finishing before the windows are completed. We have 1,500 windows, 42 years old, and they were all damaged. You can’t put it back the way it was, which is what insurance covers; you can’t put new glass in the old frames. The insurance company has agreed to pay a good portion, but the cost for new windows in the building is close to $4 million.”

“Half of our problem is the insurance company’s delay and stall tactics, which have cost us several months,” advises Foster. “If you don’t have a private adjuster, you will get killed in this process. I submitted a bill in November, and five months later they sent a letter saying it needs to be in more detail. Could that have been said a little sooner? Part of their delay-deny-frustrate tactics are to get you so frustrated that you say, ‘Give me something and get out of my life.’ 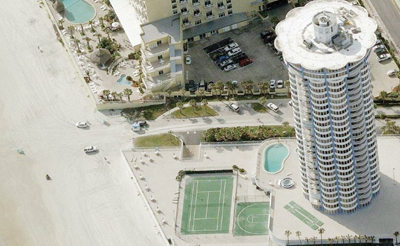 “We have had multiple meetings and 3,000 emails to move the claim forward,” reports Foster. “After a two-day meeting in March, we didn’t hear from them for six weeks. Last week they agreed to discuss settlement, but started with a figure so low that our representatives walked out initially. Four hours later they were at 400 percent more than the initial offer. Currently, we are planning to go to mediation.”

Meanwhile, owners are displaced, missing rental income, and dealing with their own insurance. “The majority of owners have been understanding; they’re unhappy and a bit frustrated, but they get it. A few are more concerned with ‘I, me, mine’ and don’t understand why we’re not back in yet—throw something over the windows, and open back up. But you can’t do that or the next storm that comes along will just do it again. You have to repair correctly.”

Though the encounter with Matthew is not entirely resolved, Foster can share advice for facing any storm or catastrophe. “Preparation is key; don’t wait until the last minute,” he advises. The next essential item is an independent adjuster. “You have to hire someone who can deal with these people,” Foster stresses. However, Foster states, “Our biggest problem has been the insurance company. Look at the policy. Read it. Talk to a private adjuster and others besides your agent about it. There may be areas that can save you a large amount with a small additional premium. People need to know their contents coverage. Look at the deductible:  there may be a deductible buy-down so that’s not such a large amount. Look at the code upgrade provisions, because some things can’t be put back the way they were if they are destroyed, and that’s all insurance will cover.” In preparing for disasters, it’s the pessimistic planner who realizes the optimistic outcome.