By Connie Lorenz / Published May 2019

It was a cool January day, and I was excited about starting this latest paving project. No, I wasn’t paving the project but was acting as the consultant hired to oversee the milling, paving, and striping crews and to be a liaison between the property manager, community, and contractors, making sure everyone was on the same page while working efficiently and staying out of everyone’s way!

The community was strewn with flyers everywhere, informing the residents of the milling and paving crew’s arrival, and it caused happiness to see that not only were the flyers on all of the buildings but also on the individual doors, mailboxes, community center, and even the dumpster! No one could say they weren’t aware of the paving project, as even the visiting vendors were respectful of our whereabouts! 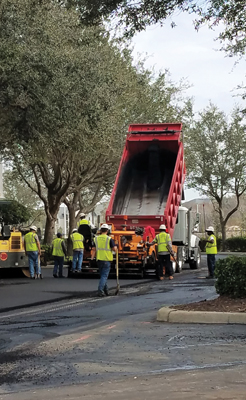 First, we started with the milling portion of the project. Once the vehicles were removed from the work zones, we found that everyone was fairly cooperative and respectful of the “cone zone.” The residents were bebopping around the community without effort, and everyone seemed to know where they were going, where to park, and how to get in and out of the community on every single day of the project. To sum it up, milling was smooth and easy.

The paving was a little bit of a different story, as it imposed  upon the residents more than the milling project. With paving, it gets a little messier, and errors at this point can ruin everyone’s mood if you’re not careful! Residents would come home, see a new parking lot, and not understand that we couldn’t open it up to traffic since the pavement wasn’t ready. Even though the surface was cooled to the right temperature, we knew beneath the surface, it wasn’t! When paving, it’s all about the temperatures, and allowing traffic on too soon can have detrimental effects to the overall performance and longevity of your new pavement.

With new pavement, it’s always best to stripe 30 to 45 days after the new asphalt has been installed. With apartment complexes and condominiums, it has been found that it’s best to restripe right behind the paving machine after the temperatures come down. Because of the cool temperatures in January, we were getting the pavement to cure wonderfully, but the striping that would normally take two to three minutes was taking up to 30 minutes to dry! Talk about a headache! By a true miracle, there was only one issue with tracking and that was from a delivery truck that barreled through the barricades.

The paving project was completed on time. Actually, it was completed early if you consider that for a few days we couldn’t start paving until the temperatures rose above 45 degrees. The punch list at the end of the project had three items: digging up a valve box that was accidentally paved over; refreshing the striping on the new speed bumps (New asphalt absorbs the striping, so it’s not good to put it on too heavy to start. It’s always best to return in six months and refresh the paint then!); and sealcoating the entranceway, as it fell on city limits and the community didn’t want to cause damage to the sensors in the city street lights. (Smart choice!) 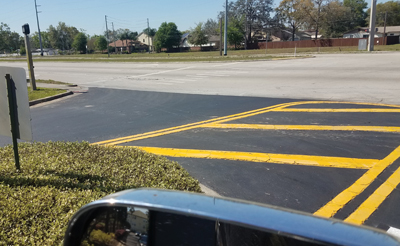 This project was successful because of the hard work of the paving crew and their ability to communicate effectively to make sure we got the project done on time, as specified, and without addendums or upcharges! The property manager and her support team were present every day assisting residents in moving throughout the community without interrupting the paving process. Every night the maintenance staff would go around to the next day’s work zone and put flyers on the residents’ doors, cars, and buildings, informing them when to have their vehicles moved by and also where it was best for them to park.

There were some other issues that always arise, like the one or two residents who feel they are above and beyond the requests of moving out of the way. We are only trying to make your community better, not make you late for yoga! There was one tenant—excuse me, renter—who said that the reason we had to keep towing her car (mind you, at her expense) was because she was a “renter,” and the notice said to all owners and tenants and therefore it didn’t apply to her! True story!

The property manager, residents, and contractors all walked away without any change orders or addendums, no incidents or injuries, and only a few residents charged with a towing fee for failing to respect the work zones. Considering the number of residents in the community and the vendors that visited, this project couldn’t have been a better example of how a new surfacing project can result into the perfect paving project!

What the Community Did Right:

What can you do to have the perfect paving project? First and foremost, if you do not have someone on the board who is very familiar with paving in general and local paving companies specifically, and you are unsure about what you are doing, then hire a consultant. Be careful when interviewing vendors who used to work with cities or in engineering firms that worked around pavement but not actually with pavement. There is a huge difference in paving in the northern states versus paving in Florida, and contractors unfamiliar with our asphalt mixes, inverted drain lines, and sub-bases can take what seems to be a simple project and make it your worst nightmare. 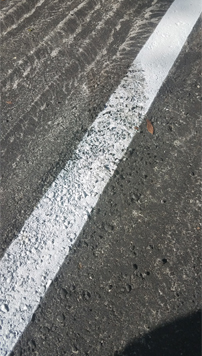 Second, research your contractors the best you can. Use Sunbiz.org to make sure they are a licensed contractor in the state of Florida. Be leery of businesses that operate with a P.O. box address, and their presidents and directors have out of state addresses. This could be a sign of a “gypsy” vendor who only operates in Florida during the winter months or when the money is good enough to make them travel! It is tougher and more expensive to chase someone out of state.

Third, communicate, communicate, and communicate with your residents! I tell people that a paving project or a surface treatment project is only going to look as good as your residents and visitors allow the contractor to be. If contractors have to chase residents out of the work zone or are constantly replacing cones and barricades because they are being removed, most likely you will get a poor project.

Hosting a web site or daily updates keeps everyone in the loop and allows your paving contractors to get the work done for that day. Remember, paving companies have to work in an active work zone every day, whether it be with the residents, the pedestrians, or the vendors. We can’t just shut the door and paint your bathroom and then open it up when it’s done!

Lastly, and this should be at the beginning of the project and not at the end, make sure your community has the right amount of reserves in place for your asphalt projects. We are seeing a lot of communities that are under budget, as they are working off of old proposals they had from years ago! Your paving project is not the place to cut corners, as the results could last you 20 years if you do it right or 7 to 10 years if you don’t!

Asphalt Restoration Technology Systems Inc. (AR Tech) is led by Connie Lorenz, also known as the “Asphaltchick,” and provides education and consultation services on proper asphalt maintenance. As a multi-year recipient of the Florida Reader’s Choice Award and Pulse of the City Awards, and one of the Top 50 Asphalt Contractors in the country four years and running through Pavement Maintenance and Reconstruction Magazine, we are the team to turn to! We provide a no-cost, detailed evaluation, property specific, with our proposals and offer board presentations to explain the different options available for pavement maintenance today.
For more information on Asphalt Restoration Technology Systems, call (800) 254-4732 or visit www.asphaltnews.com.