A Time to Give

A Time to Give

Solivita, an active, adult community in Poinciana, is the winner of the Civic Volunteerism and Advocacy award for large communities in the 2014 Communities of Excellence contest. With 212 clubs within the community leading the way, Solivita has incorporated serving the association and the surrounding community into its lifestyle.

“Except for the recreational groups, most of our clubs are serving in some way,” says Fitness and Wellness Director Elizabeth Deckard. “They do everything from reading programs in schools to fundraisers for veterans. Several of the clubs have registered as a 501(c) charitable organization,” she explains.

One relative newcomer is the Relay for Life chapter, which was started in 2012 and got off to a very successful start by raising $65,000 the first year. “It started with one lady who had a passion for this charity because she and her friends have dealt with cancer,” Deckard shares. “The second year they raised $110,000 and had such a great turnout that they were recognized by the American Cancer Society for the work they had done as a community. In 2014, they also raised more than $100,000.

To help alleviate the effects of a high poverty rate in the surrounding area, the Do Unto Others Club has partnered with the Associated Asset Management staff, which manages the property, for an annual Pack the Pantry campaign. “In 2013, we collected more than 13,000 food items,” Deckard recalls. “The food was distributed to two local food pantries and four elementary schools. We have a neighborhood competition between the 15 phases, and we throw a party at the neighborhood clubhouse for the winning neighborhood. The winning community gave more than 6,000 items last year, and this friendly competition helps get every neighborhood involved.” As well as collecting food, residents volunteer their time; Deckard states, “In 2013, more than 5,000 hours were given by Solivita residents at St. Rose of Lima food pantry alone.” 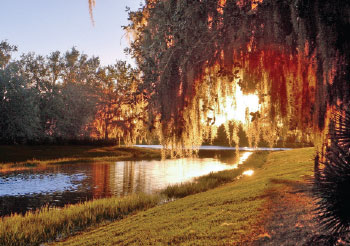 The nearby Give Kids the World charity is also a focus of serving for many residents. The organization partners with local theme parks to provide a free, weeklong family vacation for children with a terminal illness in a magical village setting. “On a daily basis, there are residents from Solivita who volunteer at all hours of the day serving meals and ice cream and driving the cookie cart around the village,” Deckard reports. “Throughout the year, well over 13,000 hours were donated by just a few hundred individuals. In addition to the residents, our management company chose this as our focus charity last year,” Deckard notes, “so between residents and employees, we volunteered thousands of hours partnering in a makeover of the village in January 2014.”

“The Lifestyles and Fitness Departments partnered to organize the Veterans Day weekend Golf Tournament and 5K Run to benefit Give Kids the World,” Deckard says. “In 2013, $11,000 was raised and 80 golfers and more than 160 runners participated.”

While many clubs and individuals donate time and money on their own, Solivita does promote volunteerism through their newsletter, e-mails, community channel, annual recognition, and Rays of Service program. Rays of Service, created by the Lifestyles Department, provides avenues of service both inside the association and with outside charities. Residents log their hours and for 2013 had recorded approximately 6,000 hours of service within the community and 6,000 with outside charities for the last ten months of the year.

“It’s a very giving community, both in time invested and dollars donated,” says Deckard. “Right now we’re finishing a weeklong Olympic event organized by the Continental Club with proceeds going to local schools. At Christmas, there will be a toy drive, which collected more than 2,000 toys last year. There’s constantly something going on!” If living well is giving well, Solivita is the place to be! 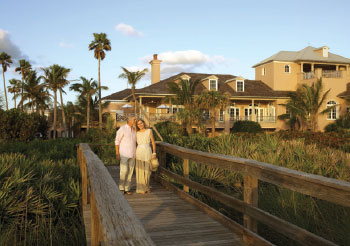 The Orchid Island Golf and Beach Community, a community of 350 homes, which also essentially constitutes the Town of Orchid, has contributed time and money to benefit the nearby town of Vero Beach and also Indian River County. Though more than 80 percent of the community is seasonal, they have had an impressive charitable impact in the winter months and have won the Civic Volunteerism and Advocacy award for small communities for 2014.

The Orchid Outreach committee now has 34 members, and manager Larry Hoffman explains, “They hold an annual party to create interest while thanking the community for their support. The committee provides food and drinks so the money raised can be used for scholarships. More than 200 Orchid members attend this event each year.” 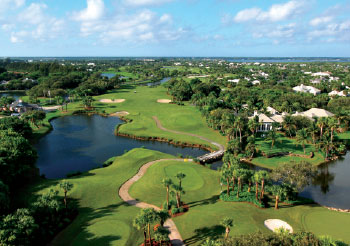 Reul notes, “Orchid has contributed to Habitat for Humanity for 11 years, not only by building but by making individual donations. The community averages building two homes per year, constructing 21 of the 303 houses built by Habitat in the county since 2007. For a very small community, that is impressive!” The community has raised more than one million dollars in donations since the Habitat for Humanity was founded 11 years ago, through various fundraisers including cocktail parties, auctions, and tag sales.

“Our members’ philanthropy is huge,” Reul states. Within the association, various committees determine which charities they wish to support and then communicate with the rest of the association via e-mail to solicit involvement. “For example, a group of women have formed ‘Connect with Cancer,’” Reul reports. “They’ve had a cocktail party with an auction and raffle to raise funds. The Tennis and Fitness Commit-tee sponsors an annual 5K run. This year, they chose to donate the proceeds to the local food pantry and were able to make a contribution toward a new delivery truck to enable delivery of large amounts of produce.”

Hoffman adds, “The Toys for Tots drive has a high participation rate in the community. They put up a Christmas tree, and the toys will be stacked around the tree five deep.”

“The residents are involved in about every charity in the area,” according to Reul. “Groups within the community do their own fundraising for organizations, and individually they serve at the environmental learning center, museums, the hospital, arts organizations, and other charities. From November until Easter, these residents come in and give a huge philanthropic boost to the community!”