Time to Address a Fault in Association Insurance Coverage

Time to Address a Fault in Association Insurance Coverage

Florida residents prepare for hurricanes and hope to make it through each June–November season without a super storm destroying their property. They insure themselves and, if a disaster strikes, expect any settlement to repair major damage or compensate them for destruction of their home. Florida has a safety net to protect policyholders should their insurance carrier fail when they most need help. But, is that safety net strong enough?

What Is the Safety Net?

Condominium and HOA unit owners are protected from the financial impact of storms, fires, and other perils in two ways. First, their association holds an insurance policy for damage or losses in common areas and attendant structures. Secondly, individual residents purchase additional insurance to cover personal property and specific indoor components in their unit. Florida law clarifies the equipment/property each policy (the association’s or individual owner’s) must cover.

FIGA is funded through assessments to all admitted carriers based on their total property and casualty coverage in the state of Florida. The legislature determines the necessary percentage assessment on policy premiums (if any) needed to keep FIGA reserves at an acceptable level.

The companies then recover the assessment through a separate charge on each property and casualty policy they issue; the same percent of premium, whether association property, individual home, auto, or other type of policy. FIGA total insured value (TIV) in the category that includes condominiums and HOAs (commercial residential property) is less than 10 percent of the TIV for all residential property, which exceeds 2.4 trillion dollars.

Fortunately, recent insurance company insolvencies have been limited, allowing the annual FIGA assessment to be zero for several years. The last assessment was 0.8 percent in 2012.

Is the Safety Net Strong Enough?

There are limits on the amount FIGA will pay to policyholders if their insurance company fails. For individual home owners, the payout cap is $500,000. This limit has been increased since FIGA was established. For insurance coverage purchased by associations, the payout cap for repair or rebuilding the association common areas and attendant structures is $100,000 times the number of units covered. The association limit has not been increased since FIGA was established.

Clearly, property repair and replacement costs for damaged or destroyed condominium and HOA units have increased substantially since 1970. The current FIGA cap would result in many owners being inadequately protected if they suffered major loss and their insurer were to become insolvent. A study in 2014 concluded that at least 60 percent of unit owners were inadequately covered by the FIGA cap. Further increases in property repair and replacement costs have occurred in the four years since that study, so at this point the safety net is adequate for only a small minority of association unit owners.

Why Is the FIGA Cap Issue Now More Urgent?

There was an effort to increase the condominium and HOA limit in 2014, but the issue was not considered urgent at that time for the following reason.

Severe hurricane seasons in the 2004–2006 time period resulted in commercial insurance companies backing out of the Florida market. Many individual residents had to find different insurers. Most associations were dropped by their commercial insurance provider and could not find an alternative.

As a result, Florida established Citizens Insurance, which became the insurer for most associations. Because Citizens is state-run and policyholders felt confident in the state’s ability to raise funds for any loss, correcting the insufficient FIGA cap was a back-burner issue. That remained the case until some commercial insurance companies felt comfortable again writing policies in the Florida association market. 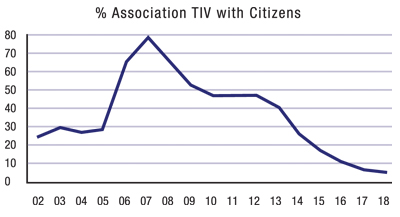 The FIGA Cap Issue Should Now Be on the Front-burner

The 2017 and 2018 hurricane seasons included powerful storms that caused serious damage. While losses were serious, they were a small fraction of what would have been the case if the storms impacted more populated areas. We can’t control whether or when that super storm might strike a highly-populated area of our state and threaten the financial stability of some insurers, but we can make sure the FIGA problem is fixed before such an event does occur.

For example, a typical unit owner’s individual policy might provide coverage of $100,000, so parity might be an association FIGA cap of $400,000. That’s a calculation that should be done by FIGA staff in support of the legislature’s work to make changes during this year’s session.

Now Is the Time to Act

The FIGA matter will come before the Florida Senate and House Banking and Insurance Committees during the 2019 legislative session. It’s critical that individual residents and associations let their legislators know this issue is important to them and hundreds of thousands of other Florida residents. The author of this article will be working to have residents in the Alliance for Bayway Communities (ABC), which represents 50 associations with more than 10,000 residents, contact their senators and representatives in the next month.

We will have the support of the Community Associations Institute and CEOMC (representing the leadership of property management companies) in urging the legislature to act. But it’s critical that individuals and their associations across the state let their legislators know they want the FIGA cap issue to be addressed this year.

Send an email or note and/or request that your association write a letter to your Florida senator and representative encouraging action to increase the FIGA cap for associations.

It’s easy to identify and contact your state senator and representative. Just enter your address on the following website: http://www.myfloridahouse.gov/Sections/Representatives/myrepresentative.aspx.

Your representatives will be identified, and you can submit an electronic message or place a call to the phone number provided.

Finally, we offer a brief paragraph summarizing the FIGA cap issue that you can use directly or improve with further comments of your own:
I live in an association that has commercial insurance with a company that is part of the Florida Insurance Guarantee Association (FIGA). I am very concerned that if our insurance company became insolvent, my coverage would currently be capped at $100,000, a limit that has not been changed since FIGA was established in 1970. The replacement value of my unit as well as that of my friends and neighbors is well beyond the cap. Individual homes enjoy FIGA coverage that is capped at $500,000. It’s very difficult to understand why there is not parity between the condominium/HOA limit and that for individual homes. I strongly encourage you to address this problem during the current legislative session and not allow this vulnerability to continue into the 2019 hurricane season.

Thanks for taking the time to read this article and for sending a communication to your legislative representatives. Now is the time to do it.

Co-Founder of the Alliance for Bayway Communities (ABC)

Bill Blazowski was a seven-year member of the Bacopa Bay Owners Association Board and is co-founder of the Alliance for Bayway Communities (ABC) in Pinellas County. The ABC represents 50 associations with more than 10,000 residents.