Editor’s Note: The other two communities who won the Trendsetter Award, Lake of Mt. Dora and Timber Pines, will be featured in an upcoming issue of FLCAJ.

Whether it’s repairs, documents, or complying with governmental regulations, associations in the same area are largely facing the same issues—so who better to share these joys and travails with than the nearby communities? Bacopa Bay, a condominium association of 188 units, decided to reach out to the neighboring communities in the Isla Del Sol area of St. Petersburg to share what they had learned and find out if there could be further benefit from exchanging ideas. The networking has proven productive in several areas, and Bacopa Bay was named a Trendsetter for 2014 for initiating this association of associations!

Bill Blazowski, Board President of Bacopa Bay, shares, “Our active facilities committee conducted a number of cost studies and developed numerous technical specifications, and we wanted to share that information and also get information from others. We reached out to similar communities located close to us and found that they also were interestedin comparing information. Our first meeting in August 2012 included six associations, and we became known as the Association Benchmarking Group, with a common interest in best practices and best prices.”

A major complaint quickly surfaced: the cost of bulk telecommunications. “Only one company provided services to this area, and our costs were increasing eight percent per year, far more than other prices at that time. As a community of 188 units, we were not getting the provider’s attention,” Blazowski recalls. “Our small Benchmarking Group worked with a telecommunications consultant and invited associations from the entire Isla Del Sol area to a February 2013 kickoff meeting on how to control these costs. The response was overwhelming, and about 40 associations with almost 4,000 units joined a group established to negotiate on everyone’s behalf. The leverage from the combined effort resulted in an agreement with three service options (instead of one). Each association is now realizing significant savings with a bulk service option that best meets their association’s needs.” 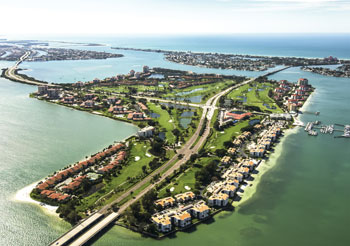 “Enthusiasm for this early activity resulted in the Benchmarking Group growing to about 20 associations,” Blazowski comments. “We’re currently involved in another broad-based advocacy effort. Landscaping is a high priority to all of the associations in this area—we all spend a fortune on the appearance of our grounds. But the Pinellas Bayway, which is our front yard, is a state-maintained road that is only mowed ten times per year, and there is practically no attention paid to fertilization, irrigation, or other important landscaping needs. We are getting involved with the city, county, and state to make sure our concerns are clear.”

The group has exchanged ideas on many of topics concern, with outside speakers often presenting information. Recovering from disasters was one subject that the group sought specialists to address. “We had two disaster recovery companies talk to our group, and that was an eye-opener,” Blazowski recalls. “An earlier meeting focused on insurance coverage and costs, but this discussion zeroed in on what can be done ahead of a disaster to make recovery less difficult. If you don’t have pre-agreements, the return to normal after a major storm can be greatly delayed. It will be important to have access to cash after a disaster because scarce contractors will work for those that can pay immediately.” The group also talked about whether the association has the legal right to dip into reserves to pay for the initial work required tostabilize the property. An alternative approach in place at one association is opening a line of credit to have funds available for immediate needs.

“We have compared rules and regulations for different associations and found them ranging from 2–30 pages,” says Blazowski. The longer documents raised questions for discussion—for example, smoking rules varied, some associations charged for cleanup of the clubhouse after private events, and there were significant differences in the usage of forms for requests, damage deposit, etc. These discussions also emphasized the importance of only having rules that are enforceable and that the association is willing to enforce. Many associations shared how pursuing enforcement action can increase legal costs. 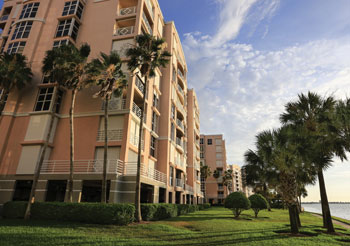 The Benchmarking Group has provided opportunity for networking between individual associations who have very similar needs. For example, Bacopa Bay and its neighbor, Isla Key, were able to save money on a seawall repair project by having the work done simultaneously by a single contractor. Savings from purchase of more materials at one time and a common contractor mobilization reduced each association’s expenditures by about 20 percent.

Networking also occurs in offline discussions between individuals who have met at the Benchmarking meetings. Blazowski states, “In a discussion with Dolphin Cay, another Bacopa Bay neighbor, we learned of the possibility of roof coatings as a cost-effective way to extend the life of our flat roofs. If the existing roof is in good condition, a coating can cost much less than a re-roof and still have a warranty that results in a significant real savings. We are certainly pursuing this approach,” he enthusiastically notes.

As might be expected, associations are eager to find out what contractors are recommended (or not) and what the going prices are. Shared information has led to a number of cases where communities have changed vendors or renegotiated contracts. “Elevator maintenance contracts are an example where costs have significant variability, and we arranged for an elevator consultant to talk to the group,” according to Blazowski. “Associations discussed who’s reliable, lower in cost, and responsive. As a result, some associations have made changes that result in significant cost savings.”

Blazowski also observes, “Much of what we’re doing, you would imagine a property management company handling if they had effective ways of information sharing. In some cases, they don’t have the time or are wary of being held responsible for recommendations. What is fair to expect your management company to do? How much time is needed for the property manager to meet expectations, and what help should be expected from the management company’s main office? These are some issues the Benchmarking Group will be discussing in the future.”

“One of our biggest problems is selecting which topics to discuss first from our long list. The right level of attention needed from management companies and insurance issues are sure to make the list. Many of us are insured by Citizens, and they are offering some associations a sizable credit to substitute catastrophic ground collapse coverage for sinkhole coverage. They are also trying to move associations toward private coverage by promoting take-outs by commercial companies. These options will have a significant impact on associations’ finances, and we will invite speakers to provide guidance.”

During the May 2 Communities of Excellence Awards Banquet, Host Tom Hudson asked two questions about the Benchmarking initiative. First, do contractors resent the Benchmarking Group sharing information on their performance? Blazowski responded, “The end result of this sharing is that the best contractors and vendors are rewarded with more business and growth. Sounds like a good outcome to me!” The second question was whether associations might not share information if they feel they are in competition. Blazowski says this has not turned out to be an issue on a practical level. “Everybody would like the value of the units in their association to be high. If our efforts result in this area of St. Petersburg having a better reputation than other areas, we all win,” he remarks.

Networking with neighboring associations can strengthen individual communities and the area as a whole. The Association Benchmarking Group of St. Petersburg has provided a welcome forum for board members to share facts, solutions, and opinions with their partners in improving the overall community as well as their own associations!