It has been 20 years since the paths of Venice Golf and Country Club (VGCC) and Asphalt Restoration Technology have crossed, and what an amazing 20 years it has been! Asphalt Restoration Technology from Orlando, FL has been treating the roadways of VGCC with Pavement Dressing Conditioner (PDC) asphalt rejuvenator since 1994. PDC is an oil-based pavement conditioner that is designed to penetrate the asphalt cap and replenish the binders that have been lost due to oxidation. Pavement oxidizes from the moment it is first mixed together at the asphalt plant and only accelerates once it’s installed in a community along with the added factors of traffic, irrigation, fluid spills, and weather.

At VGCC, the pavement has been maintained by applying PDC and installing crackfill on an annual basis. The original program was for the PDC treatment to be applied every three years. However, it was discovered in a fairly short time that the product out performed even the expectations of the manufacturer when it came to VGCC. PDC comes with a three-year performance warranty, but that doesn’t mean that your pavement will be ready for a reapplication. It was discovered that the roadways at VGCC weren’t ready for treatment at the four or five year mark and even went to as long as seven years on some of the roadways before reapplication was necessary.

This is quite a unique situation, and a lot of this is due to VGCC being a gated community, with seasonal residents and respectful residents. The reason this is unique is that VGCC was constructed with a soil cement sub-base that is installed on properties that are in low lying areas or near large bodies of water. These sub-bases are designed to rise and settle as the water table adjusts and are known as “floating bases”. Because of this sub-base, the roadways oxidize and begin to crack in a symmetrical, checkerboard pattern just like you see out your front door. 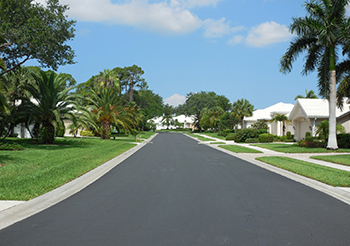 These cracks occur due to stress and constant adjustment of the communities pavement so no matter how many times you overlay this property, these sub-base cracks will constantly reflect up into the new asphalt cap, and this is known as reflective cracking or “mirroring”. The reason for the crackfill or the black “snakes” in the roadways is to help protect your sub-base from the water intrusion that occurs once the cracking becomes full depth and allows for water penetration. See, your asphalt keeps the dust down and our cars clean, but, in all actuality, the sub-base is the true stabilizing factor of your roadways, and it is vital that they stay intact and stable in order to guarantee the maximum life expectancy from your current asphalt cap.

Speaking of life expectancy, a frequent, incorrect statement is made that flexible pavement or asphalt (roadways) has a life expectancy of 20 years. Unfortunately, pavement hasn’t lasted for 20 years in more than 25 years, and communities have been basing their budgets off of this incorrect information for years and pay the price later on in addendums or special assessments. This was seen first hand on the replacement of VGCc from the entry to Fieldstone. VGCC did everything right by having any weak areas stabilized and milled out the existing asphalt cap and had a one inch compacted overlay installed, but the reflective cracking started to appear within six months! Back in the day when asphalt mixes had all the good stuff, we could get three to four years before this cracking would appear!

Over the last 25 years, new products have been developed from the same products that are used to make the asphalt binders in pavement. Because of this, asphalt mixes have been forced to change over the years, and what we have found is that we are paying a higher price for a lesser quality product. The upside is that asphalt is one of the most recycled products in the United States and is by far more cost effective than concrete or pavers. Additionally, with some of the new mixes, we are able to reclaim water, reduce the sound of traffic, and keep our communities beautiful at a minimal expense.

Some might ask if there are better sub-bases that would be more suited for VGCC and the answer is no. The community has exactly what it is supposed to have, and the original developer did a good job on the foundation. Added to that is the asphalt maintenance program designed by Asphalt Restoration Technology, so that the entire community has reaped the rewards and savings. 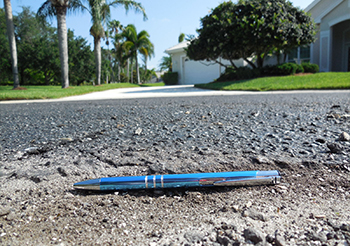 Currently, the only serious deterioration or issues that are popping up in the VGCC community roadways are located in the cul-de-sacs or roundabouts at the end of some of the roadways. The reason for this breakdown is simple and based solely on the fact that these areas were designed for traffic to turn around. The constant weight and traffic pressure to the outside edges of the roadway puts an additional stress on these areas and has caused the pavement in the center or along the islands to become thin and weaken and the cracks to become wider than what crackfill is designed to correct. Once asphalt becomes less than ¼-inch to ½-inch deep, it begins to ravel and breakdown faster, and we are seeing that the pavement in these areas are at that depth closest to the islands.

VGCC and Asphalt Restoration Technology have designed an asphalt maintenance program that is currently used as the template for many communities in the state. The VGCC board of directors has been kind enough to allow other HOA boards to visit their community and view our roadways and learn about the maintenance program that has been established. To this day, it is used as an example due to the tremendous success of a community not only using our rejuvenation program but also doing asphalt maintenance the right way.

The VGCC boards of directors have established a “preventative maintenance program” rather than a “crisis management program” and because of this, they have saved the residents thousands of dollars over the years. Crisis management is when a board waits for a pothole to develop or the roads to completely fail before doing anything about it. This typically results in a higher price correction and most likely the beginning of many issues yet to come.

Asphalt Restoration Technology Systems, Inc. (AR Tech) has been established in Florida since 1993. Connie Lorenz is President of AR Tech and has been with the company since 1999. Her leadership skills and classes have taught thousands of consumers about proper asphalt maintenance and has helped save them thousands of dollars, and she has become an advocate in the industry focusing on protecting homeowners, property managers, and owners from the downfalls of questionable contractors and improper techniques. For more information, visit www.asphaltnews.com.

The “preventative” maintenance program at VGCC was based on actual costs and projections from the board of directors in the 90s and was carried out by each board thereafter going to show that a well worked plan pays off in the end. What did VGCC residents truly save? That’s a good question, and this will be kept as simple as possible. Based on a one inch asphalt cap having a true life expectancy of about 15–17 years, this number can be reduced from 13–15 years because of the deterioration factor of just the soil cement base alone.

PDC was introduced into Phase 1 about five to six years after the first roadways were installed in the community. These roadways are mostly still in place with the exception of the entryway from Venice Drive to Fieldstone, as well as a small section of Fieldstone to just after Royal Oak Dr. Noting that these roadways took the brunt of all of the traffic throughout the different phases of this community, we could assume that a 15 year life expectancy would be considered an acceptable amount of time from a one-inch lift. 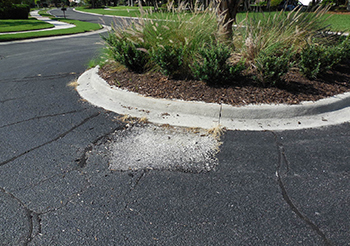 Looking back over the years, one of the greatest things we see is that the first phase of the PDC and crackfill application shows an abundance of crackfill installed in the roadways. Phase two was turned over to us within a few years of the roadways installed and shows a far less amount of the crackfill “snakes” than phase one. When we go to the roadways that were treated in phase three that were turned over within the first year or so of construction, you can see even less crackfill than phase two and a drastic difference than phase one! PDC is designed to preserve the pavement at the age that it is applied. So therefore, even though some of your roadways are 24-plus years old, they actually appear to be about 8–10 years old. This isn’t because I say so but because VGCC has had engineers come out to property and make the assumption that the roadways were only eight years old and were quite shocked when they discovered the real age of the roadways.

Since we can still count on another 5–10 years out of the current roadways by repairing any defects, crackfilling, and applying PDC, we can say comfortably that VGCC has saved the cost of an entire overlay in the last 20 years at a minimum. Taking into account all of the roadways in the community and the cost of what a one-inch overlay would have been in 2006, which is unfortunately when we were in the peak of the oil crisis, an overlay would have cost about $7 per square yard or for this entire community or around $700,000! In today’s market, this same overlay with milling will run about $1,100,000!

Since the beginning of our program back in 1994, VGCC has spent about $344,697 in total asphalt maintenance for repairs, application of PDC, and crackfilling over the years and we are still going strong. As you can see, making an investment in your community has definitely paid off for not only your community but for your wallet as well.