The War on Waste

The War on Waste

The winners of the Financial Innovation award in the Communities of Excellence contest have waged the battle for frugality on many fronts, and they show that services do not have to be sacrificed in order to hold costs down.

Timber Pines Community Association, winner of the Financial Innovation award for large communities, is a 55+ active adult homeowner association located in Spring Hill. Manager Bill Tesh explains, “A 55+ community inherently has a lot of residents on a fixed income, so we try our best to avoid any spikes in the monthly assessment and to stay well within current inflation. As part of our goal of keeping Timber Pines ‘affordable for most,’ we have agreed never to have special assessments or long-term debt.”

Funding for reserves is fundamental to avoiding special assessments, and Tesh credits prior boards with being very successful in their reserve planning. “We never drop below $1.5 million in reserves, because we don’t want to be forced into a special assessment to cover the deductible in case of a catastrophe such as a hurricane or sinkhole,” Tesh reports. “We will defer a project until the funds are available rather than drop below that threshold.”

The community has invested in a $5.4 million replacement of their irrigation system, which Tesh anticipates will cut $24 million in replacement and repair costs out of the capital reserve budget over the next 30 years. “The system is constructed from HDPE pipe, which was first used in Europe for natural gas transmission because it doesn’t leak. The material is fused with a welding apparatus and has a projected life of 50–80 years,” Tesh reports. “Besides cutting out leaks and repairs, with the improved system, we can now water our 63 holes of golf course and more than 100 acres of common grounds in less than eight hours a day, where it formerly took 12 hours. Since we’re running the pumps less, we’re saving electricity and equipment repair and replacement costs also.” While less water is used for irrigation, the community has contracted for a fixed amount of reclaimed water so the actual water bill is unchanged. 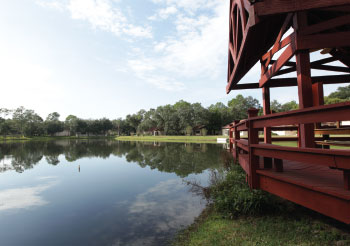 Food and beverage services were turned over to an outside vendor, saving $200,000 per year and improving food quality and residents’ participation as well. However, grounds maintenance for the common areas was brought in-house shortly after Tesh arrived in 2009. “We’ve always maintained our golf course, so it was cheaper to do it in-house since we already had the expertise, equipment, management, and supervision,” Tesh notes. “We increased staff and still saved $150,000 per year, and the grounds look much better.”

Installing programmable thermostats and compact fluorescent lighting has produced savings of $59,000 per year. Converting other incandescent lighting to LED has cut those energy costs by 27 percent. “We put in hundreds of fixtures,” Tesh states, “and no LED bulbs needed replacement in the last 12 months, saving more than 100 man-hours. Geothermal heating and cooling at the pools has saved on energy costs, especially with the spike in LP gas prices.”

Like most communities, Timber Pines was impacted by the economic downturn, but with delinquencies below two percent, their budget was not thrown into chaos. Tesh relates, “We try to maintain distressed properties so they don’t become a blight and pull the overall ambiance of the community down. We aggressively pursue any delinquent accounts, and when it hits 91 days, it goes to the attorneys for notice of lien, intent to enforce lien, and foreclosure. We resold some properties, and did rent out one home. Our attorney said the bank probably wouldn’t foreclose on it for a couple of years, so we furnished and rented it. Two months later, the bank foreclosed; we decided not to do that again!”

“A strength of Timber Pines is the number of door knobs—with 3,452 homes, you don’t have to raise assessments much to generate a sizable amount of money. We seem to be well-positioned to not ever have special assessments,” Tesh projects. For Timber Pines, long-range planning and evaluating all options is achieving their goal of financial stability.

The Pines of Delray West of Delray Beach, winner of the Financial Innovation category for small communities, are determined to get the most for their money, and they are succeeding. Under the management of Campbell Property Management and on-site manager Teri Fifth, the association’s expenditures have been evaluated for efficiency and best utilization of contracts or in-house labor, and all contracts have been rebid with both warranties and cost in mind.

“We go out to bid on every contract,” explains Fifth. “The community had not really managed vendors to get the most bang for their buck—by insisting on work being done right at no extra cost. We found that a lot of vendors had decent prices and were willing to back up what they say with a warranty.”

“The most significant savings came from our proactive approach in requesting meetings and proposals with potential insurance agents. We got more coverage and we pay less,” Fifth reports, “with our policy cost dropping more than $40,000 per year. We also changed auditors, which not only saved the community money on accounting costs, but also gave us a fresh set of eyes.

“We’ve signed a three-year grounds maintenance contract and decreased our landscape costs by $2,000 each month,” Fifth relates. “This includes a six-month warranty on work, where we had no warranty before. We found a vendor who is all-inclusive, so they are handling white fly treatment, chemical applications, and weekly service.”

After evaluating whether contract or in-house service was optimum, Pines of Delray made two switches. “We brought janitorial service in-house and saved more than $6,000 per year, including on supplies and labor,” explains Fifth. “But, for our pool maintenance, I found that we were spending $750–800 per month on chemicals doing it ourselves. I brought vendors in for proposals and contracted that for $495 per month including supplies, and now our staff doesn’t have to clean the pool so we gained staff time as well.”

Policy changes have trimmed tidy amounts from the budget; Fifth found that overstocking was spending money prematurely, and unnecessary trips for maintenance supplies were creating unnecessary fuel expenses. “The policy now is that we only pay for two trips for supplies each month,” Fifth states. These changes have netted the association more than $10,000 per year. Mailing costs have been reduced more than $2,000 per year mainly by scanning and e-mailing bills for approval to board members away from the property, rather than sending them by FedEx.

A rigorous collections policy has helped minimize foreclosures. “We’re not just sending a letter,” Fifth says. “I’ve learned to call and use one-on-one contact every month, which a lot of associations don’t do. I’m not nasty, but owners don’t want you calling them so most of them pay. You save a lot of attorney’s fees by having management do this.” 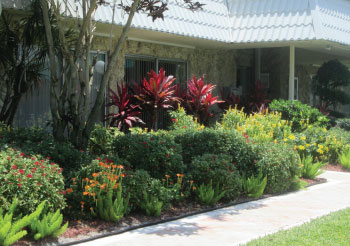 The community’s reserves are 100 percent funded, and there has been one increase in maintenance fees over the last seven years, according to Fifth. “Our entire board, led by our Board President, Thomas Comparato, has been committed to the financial stability of our community.

I have to give kudos to Treasurer John Critelli and the finance committee,” Fifth stresses. “They are totally committed to protecting the people here, so they wouldn’t have assessments that would hurt them personally. They told me their core values, and I followed through.” Pines of Delray West has negotiated the path of saving without scrimping, keeping residents secure from increased costs, or loss in property value.