Though no one is an advocate of wasting water, it does require effort to make the changes necessary to conserve. Winning the Water Conservation category in the 2016 Communities of Excellence contest, On Top of the World of Ocala and Island Place of Tampa have demonstrated commitment and action in reducing their water use.

On Top of the World

On Top of the World Communities was established in 1983 and currently has more than 5,000 homes, which include villas, single family, and estate homes. More than 4,000 of the community’s 13,000 acres are developed thus far, and landscape superintendent Phillip Hisey observes, “The community has been conservation-minded since the beginning, setting aside more conservation area than was required.” Reducing both inside and outside water use has been a focus of the community in recent years. 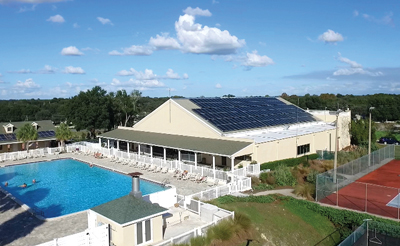 “We began honing our water conservation in 2005, and starting in 2008, all new homes are constructed to meet Florida Water StarSM standards, though the amount of high-volume exterior irrigation may prevent some from qualifying,” according to Hisey. “We were instrumental in helping develop the standards by serving as a test site to provide information. They were using quarter-turn valves, but we showed that the push-pull valves we were using worked better. Also, we were using armored hoses, which are reinforced by fiber or steel to prevent leaks in hoses going to appliances.

“We were already doing so much to conserve water that there were not many changes needed to make all new homes Florida Water StarSM certified,” Hisey shares. “We use .5 gallon per minute aerators in all faucets, which they adopted also. Toilets have a flow of 1.28 gallons per flush, and shower heads with 1.5 gallons per minute of flow are installed. Water Sense dishwashers are a standard item installed in new homes. We had the extension agents certify the landscape packages we offer with each home. Since we were already following environmentally-sound practices for the most part, we just needed to add mulch and tweak a few details to have the homes certified.

“We pay the upfront costs for digital water meters, which detect leaks and have a data-logger feature that can recall water use by the hour for the last 90 days,” explains Hisey. This has also been offered to homes constructed earlier in development, and Hisey reports that 6,006 of the 6,102 meters on site are now digital. “We also offer leak detection tablets and rain gauges,” he notes. 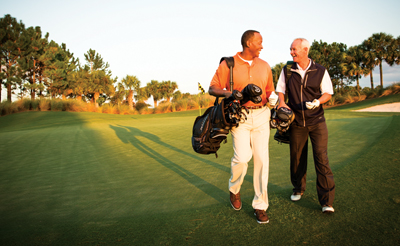 To conserve irrigation water, pressure regulating sprinkler heads have been installed, and drip irrigation is used on all new beds. “It probably saves 50 percent by putting the water right on the plant,” Hisey estimates. “It was cost prohibitive to retrofit irrigation on all existing beds, and with established plants not needing as much water, there would be little savings.”

The community switched to evapotranspiration-based rain sensors in 2009 after a year trial period. “We compared lots using soil moisture sensors and Solar Sync™ with equivalent lots using regular sensors. The lots with evapotranspiration sensors used 30 percent less water, so based on that we changed sensors on all commercial areas and began using them across all residential construction,” reports Hisey.

In 2011 the community began using reclaimed water for irrigation, reducing groundwater withdrawal by roughly 120,000,000 gallons annually for the golf course and 35,000,000 gallons per year on common areas. Other significant water savings on the golf course overseen by golf course superintendent Andy Jorgensen resulted from an irrigation audit identifying issues such as nozzle wear, head mismatch, and overly high pressures, which caused vaporization at the sprinkler head. 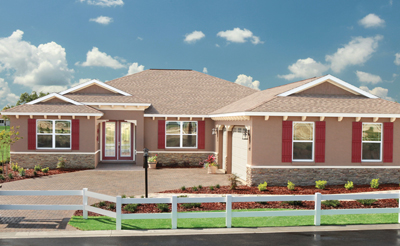 “We identified the need to upgrade or replace sections of the irrigation system,” says Jorgensen. “We completed some of this last summer by replacing the irrigation loops around greens to provide better spacing and distribution.” Another significant water savings has resulted from liquid overseeding, by applying fertilizer and organic colorant to Bermuda grass in the winter rather than planting—and heavily watering—annual rye grass. Jorgensen relates, “Liquid overseed reduces overall water usage by roughly 21,000,000 gallons annually compared to watering requirements to establish traditional overseeding.”

Hisey maintains, “With the mandates imposed from the water management district, every ounce we can save is that much better.” With the addition of new, advanced technologies and deterioration of older systems, the pursuit of water conservation will be a permanent goal at On Top of the World.

Island Place in Tampa initiated improvements in their irrigation system to reduce water use in early 2015. An irrigation audit, completed in 30 days, was performed to locate broken heads and pipes, observe water distribution, determine ways to save water, and identify any other improvements needed.

Information on findings was presented to the residents along with proposals. Literature from the manufacturers of the proposed controllers, sprinklers, and nozzles was provided to the board to show the anticipated cost savings.

The modifications included converting to all MP (matched precipitation) rotator-type spray head nozzles to improve distribution uniformity, using check valves on all spray or gear-driven heads to eliminate low head drainage, placing all heads for maximum efficiency, and installing evapotranspiration controllers. Once board approval was given, the physical work was comple-ted in 60 days.

The project cost was $32,000, but the benefits include health-ier plants and environmental benefit as well as the eventual financial savings from decreased water use. Previously, grounds were irrigated seven days per week. A reduction in the irrigation schedule was beneficial to plant appearance as well as the budget.

The community continues to audit the irrigation system monthly for any broken equipment, leaks, or changes in the water bill. Anticipated future improvements include elimination of thirsty landscape beds, addition of flow meters, and upgrades as new technologies become available.