My neighbor has an approximately six-foot barbeque grill, and the smell and fumes regularly come into my townhome. It makes my eyes water, and the smell is horrible. The board president stated that the association can’t take any action because barbeques are allowed by the governing documents. The smoke goes up 50–60 feet in the air. I spoke to other owners who have the same problem, but they don’t want to complain. My right eye is in bad shape—is there a solution here?

It is likely that your governing documents contain language prohibiting nuisances, as well as possibly other annoying behaviors that do not rise to the level of a nuisance. A true legal nuisance needs to be fairly continuous and pervasive to support a legal action, and I doubt that the occasional use of an outdoor barbeque would qualify. Not to mention, a nuisance is measured by the standard of a person with ordinary sensibilities; if it turns out you are particularly sensitive to smoke because of your eye condition, that would probably be insufficient to establish a claim for legal nuisance. 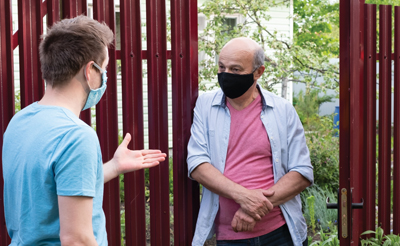 Establishing a violation pursuant to more general “annoyance” language is an option, however. Such provisions may be judged on a broader standard, but I think you would still need to establish some level of significant interference with your use and enjoyment of your home, and also that your needs outweigh your neighbor’s right to have a barbeque and cook (which is, in the end, a pretty ordinary activity). Really, this situation is very similar to that of a condominium neighbor who likes to cook fish or cabbage, and where the smell from such activities may be found offensive to neighbors. It’s unlikely that a court would prohibit such ordinary activities under any standard—unless perhaps the person was operating a sauerkraut-canning business or doing something that was unusual for an ordinary residence. I do wonder about your statement that the smoke rises 50–60 feet in the air as that does not seem typical. Is he using some kind of commercial barbeque, or a smoker perhaps? That could be relevant.

Another avenue you might be able to pursue is to argue that due to a disability (assuming that your eye condition constitutes a disability, which is likely), the association must modify its rules and practices to accommodate your disability and to allow you the full use and enjoyment of your home, by limiting your neighbor’s use of his barbeque. What’s an open question, however, is whether you can, due to a disability, limit behavior by your neighbors. For example, can one person who is allergic to dogs somehow prevent another person from having a dog, when that dog is otherwise allowed by the governing documents? I’m not aware of a case on point, but I know this theoretical question comes up from time to time with respect to assistance animals (does one disabled person’s right to an assistance animal trump another disabled person’s right to avoid animals?).

As with most interpersonal disputes, the best way to deal with this issue is having a frank discussion with your neighbor. When does he use the barbeque most often, and is there a way he can modify his behavior to limit the impact on your townhome? Can he perhaps move it to another area, or use a fan to blow the smoke and odor in a different direction? Realistically, that’s going to be your best option. And, you may need to invest in some kind of heavy-duty air filter to use on grilling days.

We recently found that our president does not own or live in a home in our community. Instead, his ex-wife owns a home here by herself. Can he legally be on our board and serve as president?

The answer to your question is entirely based on the requirements of the governing documents. There is nothing in either the Condominium or HOA Acts that would limit an adult from serving on your board. Both the Condominium and HOA Acts state that owners are eligible to serve on the board, but other people could be eligible as well, and that question would be answered in your articles of incorporation or bylaws (generally speaking, does it state that all directors must also be members of the association?). If there is no limitation on who may serve, then there is no reason that this person cannot serve on the board if elected by the membership. The same is the case for his service as an officer. Some governing documents state that officers (or certain officers, such as the president) must also be directors or owners, but many have no limitation at all.

Ryan D. Poliakoff is a partner of Backer Aboud Poliakoff & Foelster and serves as general counsel to condominiums, homeowners associations, and country clubs throughout South Florida. He is a board certified specialist in Condominium and Planned Development Law and the co-author of New Neighborhoods—The Consumer’s Guide to Condominium, Co-Op, and HOA Living. He is also a frequent contributor at seminars and workshops for attorneys and board members, and he has written hundreds of articles for magazines and newspapers throughout the United States. He can be reached at rpoliakoff@bapflaw.com. For more information about his firm, visit www.bapflaw.com.