Will The Association’s Denial Of An Architectural Request Withstand Challenge?

Will The Association’s Denial Of An Architectural Request Withstand Challenge?

For many homeowners associations, a top priority is ensuring that the homes in the community are maintained in conformity with the “community-wide standard.” But, what is this subjective standard? How is compliance measured? What is the process to be judged when a request to the association’s architectural review committee (ARC) is made? The ARC is instrumental in ensuring that the community-wide standard is met. However, your association may run into a problem if the ARC denies a request from a homeowner if the association has not adopted specific, objective criteria and guidelines on which the ARC can rely.

Sometimes applications to the ARC are denied because the proposed modifications were not “in harmony” with the other homes in the community or did not conform with the “community-wide standard.” However, such a limitation is vague, and a denial based on whether a particular modification is “harmonious” is subjective. Thus, the members are entitled to specific guidelines regarding what is allowed and what is not allowed, and in fact, this is required by law.

The association’s ARC can only be as effective as the objective guidelines and standards drafted into the declaration and board-adopted rules. If your ARC is relying on aesthetics or other subjective criteria that are simply “personal preferences” rather than written, adopted, and published objective standards and guidelines, any disapproval is vulnerable to a successful challenge. In fact, in the seminal case regarding approval of architectural modifications, Young v. Tortoise Island Homeowner’s Ass’n, Inc., 511 So.2d 381 (Fla. 5th DCA 1987), the court held that where the governing documents were silent as to the modification at issue, a denial could not be based on the architectural control board’s opinion regarding “aesthetics, harmony and balance—admittedly very personal and vague concepts.”

In Young, the owners submitted an application to build a flat roof on their home. The homes immediately surrounding the home were all peaked roofs. Nothing in the governing documents prohibited an owner from building a flat roof, and the requested roof complied with all of the specific requirements set out in the governing documents. However, the architectural control board denied the owners’ request because there was a “very strong feeling” that the flat roof would not be “architecturally compatible with the other homes.” In the end, the Youngs built the flat roof despite the association’s disapproval, arguing that the architectural control board had no authority to impose a prohibition against flat roofs. The court agreed with the Youngs, holding that

“In the absence of an existing pattern or scheme of type of architecture which puts a prospective purchaser on notice that only one kind of style is allowed, either in the recorded restrictions or de facto from the unified building scheme built on the subdivision, such a board does not have the power or discretion to impose only one style over another based purely on ‘aesthetic concepts.’”

The flat roof violated no recorded restrictions, no objective rule adopted by the association, and no de facto common existing building style in the community. Therefore, the court held that it was beyond the power of the architectural review board to prohibit the flat roof. 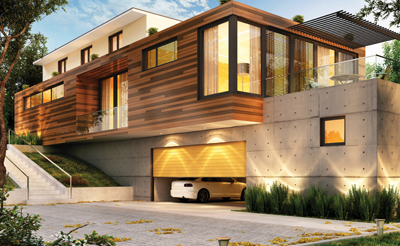 In other words, the ARC can only approve or deny requested modifications based on objective standards with specificity as to location, size, type, or appearance that are set out in the declaration or other published guidelines and standards. Without specific, objective standards to rely upon, the ARC is at risk of making arbitrary decisions regarding approval. Basing ARC denials on concepts like “aesthetics, harmony, and balance” will land the association in hot water if an owner challenges such denial. It is far safer to base approval or denial on objective standards as set out in the declaration or as adopted by the board.

Creative drafting by an association’s attorney is critical in order to capture those ARC applications where a member may request a modification that is not squarely addressed by the governing documents. In plain English, a “catchall” amendment to the declaration can be artfully drafted that stands for the proposition that, if such a request is made, then the existing state of the community is the applicable standard by which the application is to be judged. For example, if the Tortoise Island Homeowner’s Association had had such a provision in its declaration, then given that there were no flat roofs in the community, the existing state of the community may have provided a lawful basis for the ARC to deny the request, thus possibly leading to a whole different result in the case.

On a related note, there are strict procedural requirements that your association must follow, most especially if the ARC intends to deny an ARC request. It is likely many ARCs do not conduct their activities in conformity with Florida law such that a denial could withstand judicial scrutiny. Pursuant to §720.303(2), Florida Statutes, a meeting of the ARC is required to be open and noticed in the same manner as a board meeting. In other words, notice of the ARC meeting must be posted in a conspicuous place in the community at least 48 hours in advance of the meeting, and the meeting must be open for the members to attend. In addition, pursuant to §720.303(2)(c)3., members of the ARC are not permitted to vote by proxy or secret ballot. Bare bone minutes should be taken as well to create a record of ARC committee decisions, most especially denials.

We hear from many associations that the ARC does not meet openly or notice their meetings. This leaves any decision made by the ARC vulnerable to challenge. If the ARC denies an application but fails to do so at a properly noticed meeting, the owner can challenge the denial claiming that it is not valid as the ARC did not follow proper procedures. Many declarations contain language which provides that if an ARC application is not approved or denied within a certain period of time, the application is deemed approved. In that case, if the ARC’s denial of an application is not valid because the ARC failed to comply with the procedural requirements for the meeting, an application which violates the declaration or the ARC standards may be deemed approved by operation of the declaration! By complying with the provisions of Chapter 720, Florida Statues, your association can avoid that disaster.

Practice tip: Remember that notice of any board meeting at which the board will consider a rule which restricts what an owner can do on their parcel must be mailed, delivered, or electronically transmitted to the members and posted conspicuously on the property not less than 14 days before the meeting.

If your association has not adopted objective ARC standards and guidelines including the “catchall” provision discussed above, now is the time to start! We recommend that you contact your association’s counsel prior to drafting such rules to ensure that the association is in compliance with the requirements of the governing documents and Chapter 720, Florida Statutes.

Attorney Jeffrey Rembaum has considerable experience representing countless community associations that include condominium, homeowner, commercial, and cooperative associations throughout Florida. He is a board certified specialist in condominium and planned development law and is a Florida Supreme Court circuit civil mediator. Every year since 2012, Mr. Rembaum has been inducted into the Florida Super Lawyers. He was twice awarded as a member of Florida Trend’s Legal Elite. Kaye Bender Rembaum, P.L., is devoted to the representation of community and commercial associations throughout Florida with offices in Palm Beach, Broward, and Hillsborough counties (and Miami-Dade by appointment). For more information, visit kbrlegal.com.