The 2014 Water Conservation Communities of Excellence winners have tackled the integral connector between outdoor water need and water use: the irrigation system. Both communities found that improvements in their water delivery system were necessary to cut wasteful water consumption.

The Country Club of Mt. Dora, a community of 829 homes, maintains the grounds for 12½ acres of common areas as well as the landscaped areas for 417 of the community’s homes. Because the water for common area irrigation is drawn from a pond, the actual amount of water used does not cost the association; however, runoff water was discoloring the roads, and the water used for irrigation of homes is metered potable water. “We started implementing initiatives so we could be good stewards,” says manager Bobby Douglas. “And I know that tighter controls are coming to Lake County so we wanted to be proactive.” 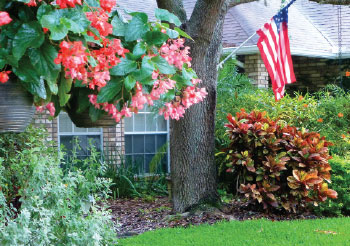 Douglas became involved in the water use issue his first day on the job. “I have experience with landscaping, so I started digging into it and found the irrigation system was inadequate. The first change was to have the landscaper change the watering to cycle and soak. When you irrigate, often the soil can’t absorb the water fast enough so it runs off into the streets and is wasted. By watering for a shorter time and allowing it to percolate before running another short cycle, all the water is absorbed by the ground, where it is needed. You end up watering for less time with more efficiency.”

The association has been upgrading the irrigation system grad-ually to ease the impact on their budget. “Every month we spend approximately $1,500 for the irrigation company to retrofit motors, sprayheads, valves, and such. All of our four-inch irrigation sprayheads needed to be replaced with six-inch tall heads so they would pop up high enough to not be blocked by the grass when it is tall. We’ve probably spent more than $20,000 so far and we’re halfway through. For the homes we maintain that use metered water for their landscape, water use has been reduced 40 percent.” 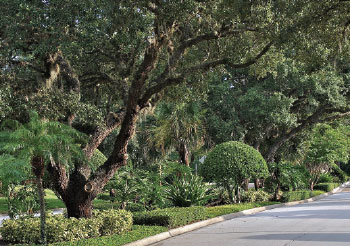 The next phase is in conjunction with Rainbird as a demonstration property for a new type of controller. “These work with GPS and weather data so they will be very refined. We will be a trial neighborhood for this new technology that is similar to expensive high-tech systems used by golf courses and larger operations,” Douglas explains.

“For 40 controllers, the investment will be $60,000, which the community is hoping will be partially funded by grants from the St. Johns River District and the city,” says Douglas. “We have been aggressive in reducing our water use in part because we want to be at the front of the line to receive funding for these controllers that will help us further reduce our water consumption.

“We are in the third year of a program to upgrade to Florida-Friendly™ plantings,” Douglas relates. “To assist the homeowner in converting their personal landscape areas to more drought-resistant plantings, we’ve created Windgate Park. This area is planted with all Florida-Friendly™ species along the paths, with labels giving their name and pictures so a homeowner can order the plant for his own yard. We have an annual seminar to keep all the homeowners up-to-date on the latest landscaping, irrigation, and water use information. Many of the homeowners maintaining their own yards have also implemented cycle and soak watering.”

“To make the changes we’ve made takes cooperation with the board and committees,” Douglas observes. “Without their support, we wouldn’t have been able to go forward to implement processes and spend money.” The investment of Country Club of Mt. Dora in water conservation is an excellent example of the power of an association to accomplish more together than they could individually.

Lakes of Aloma Homeowners Association of Oviedo is the winner of the Water Conservation category for small communities. “We were able to reduce our irrigation budget from $5,000 to $2,000 per year,” recounts Board President Rob Whaling. The 130-home community had encountered several excessive bills due to malfunctions and was able to upgrade their sprinkler system to im-prove performance and conserve water. “I’m in the irrigation business,” explains Whaling, “and we have a relatively new product that was suited for testing at this site because I can track the water bill. Since my company donated the system and the irrigation contractor installed it for free because they wanted to learn how to use the product as well, it was a win/win for everyone.”

“We had a good, conventional irrigation system with a clock programmed by an irrigation technician, and we also had a rain sensor as is required. With the new system, a soil moisture sensor only allows irrigation when the moisture in the soil reaches the designated level. This is superior to a rain sensor, which can dry quickly and allow the sprinkler to come on because it doesn’t take wind, temperature, drainage, and other factors into account,” Whaling notes.

“We’ve also added a flow sensor” Whaling reports. “After the first cycle, it measures the flow rates for each zone. If a significantly different flow rate is detected in the future, it will shut down the system. Though it’s not sensitive enough to be considered leak detection, it will prevent major water loss from a broken pipe or sprinkler head.” Whaling is also enjoying the use of remote management. “I can make changes from my computer based on weather patterns or the soil sensor. Often at properties, the settings a technician made in June will be untouched in January, though the conditions are much different. This allows us to easily make adjustments.”

The value of the irrigation upgrade is about $5,000, so the payback period would have been less than two years even without the donation of time and materials. Conservation of water is a plus for the plants, the planet, and the pocketbook at Lakes of Aloma.