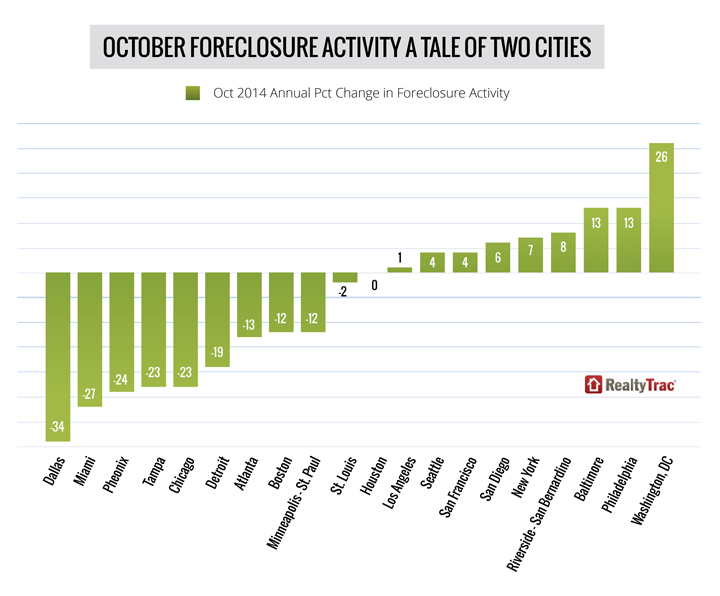 According to a monthly report released by RealtyTrac, the nation’s leading source for comprehensive housing data, Florida remains in the top 5 states for foreclosure rates and two of Florida’s MSA’s (metropolitan statistical area) have the highest number of homes or units in foreclosure; Tampa and Miami.

While the term foreclosure carries a negative connotation, attorney Frank Ruggieri with The Ruggieri Law Firm in Orlando explains that Florida being at the top of the list in number of foreclosures is not necessarily a negative statistic for the state.  “Florida can and should lead the way in making some important reforms to the foreclosure process as the State continues to have one of the highest foreclosure rates in the U.S.,” says Ruggieri.

Daren Blomquist, vice president with RealtyTrac states in a press release found on the RealtyTrac website that accompanied the October report that although this is not a surprise, the biggest increase in U.S. foreclosure rates since March, 2010 is more than just a seasonal uptick as many experts have suggested. “The October foreclosure numbers are not a complete surprise given that over the past three years there has been an average 8 percent monthly uptick in scheduled foreclosure auctions in October as banks try to get ahead of the usual holiday foreclosure moratoriums,” said Blomquist, “But the sheer magnitude of the increase this year demonstrates there is more than just a seasonal pattern at work. Distressed properties that have been in a holding pattern for years are finally being cleared for landing at the foreclosure auction.”

Ruggieri agrees that the report is not surprising and goes on to share why he feels the foreclosure numbers remain high in Florida. “I believe the increased activity I have seen is mostly associated with concluding foreclosures which have sat idle for years as well as ‘secondary foreclosures’ in connection with previously modified mortgages.  Banks are now more willing to take title in light of increasing property values. Homeowners who previously negotiated modifications are now, in some cases, defaulting once again,” said Ruggieri.

Click here to read the October, 2014 report in its entirety.

Information for this article was provided by RealtyTrac and FCAP service provider member Frank Ruggieri with The Ruggieri Law Firm.