The Ongoing Case of Homeowners Versus The Elements

by Kathy Danforth / Published May 2014

Many associations have been preoccupied with financial crises, and that tyranny of the urgent has diverted attention from the inevitable upkeep and repair required to maintain the community’s physical assets. But “time and chance happen to them all” is a principle that applies to buildings as well as people. Neglect or avoidance will not stop decay, and instead tends to accelerate the degree of repairs needed.

Even with meticulous maintenance, though, a number of factors work against many community associations. “Florida is very hard on materials,” comments Bud Karins with Karins Engineering Group. “Shingle roofs that will last 50 years in Maine last 15 years here because we have very intense sunlight. People want to live on the water, but it’s like living in a concrete ship; you have all the maintenance expenses of a ship, but it doesn’t move. Concrete is pretty long lasting, but the steel inside is affected by salt, and it starts to pop the concrete off. If you want to live on the water, assume you live on a boat—a fiberglass hole in the water into which you pour money.”

Other factors contributing to building failure can be poor design, construction technique, and/or materials. Stan Swaysland with Swaysland Professional Engineering Consultants comments, “My theory as to the cause of many condominium repair projects is that the building is typically built for the lowest first cost with not much thought for maintenance or longevity. For example, none of the buildings from the 1970s have waterproof membranes on the top surface of a balcony to keep water out.” 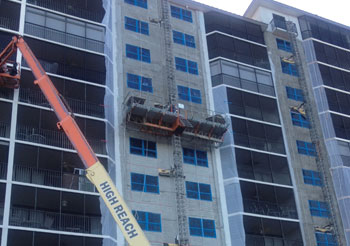 Karins sees inattention to detail and cheap materials as major contributors to water damage. He describes one common situation: “In masonry construction, the masons work from the inside reaching over the wall and smoothing the surface. On the top course, they put the mortar on and shove it in; they say the stucco guy will fix it, but that doesn’t happen. There are always poor joints at the top of a wall. We have solutions for that, which are not expensive when you’re in the building process, but if you have to go back, it’s expensive just to get access to the joints. Another issue is when windows are not done correctly,” Karins explains. “Even when they’re closed, they leak into the wall, and you have to take steps when you prepare the opening to divert water.”

“I was in construction before I started engineering,” Karins relates. “In the 1970s, people in trades were often taught by their grandfathers so I was taught by the masters when I asked, ‘Why are you doing it that way?’” In the 1990s, the big building boom attracted cheap, inexperienced labor that drove out the skilled labor. You would have guys doing stucco work that got to town two days ago and bought a trowel. It’s not hard to do right, but you do have to be trained. Unfortunately, in the last ten years, the overseers haven’t known the trades, and they’re just trying to keep on schedule. The job has been balkanized—broken into little pieces and getting the cheapest guy for each part. The result is that condominium owners end up having to redo work at tremendous expense.”

At one property Karins has worked with, the homeowners underwent three major projects before their window leaks were successfully controlled. “The tower was built in the 1980s and has 12 stories. Unfortunately, it had metal frame walls on the outside instead of concrete, and in 2000, they hired an architect to oversee replacement of the windows. They took the skin off the wall, reframed the metal framing, and put in new windows. But, there were still leaks.”

“In 2005, they hired a new architect who supervised replacing the windows with very nice casement style, impact-resistant windows from a relatively small window manufacturer. The sash was so heavy that if you left it open, the frame would sag and wouldn’t close. This was a window design the manufacturer had used before, but with impact-rated glass, it must be a bit more robust, and they didn’t take into account how to keep it rectangular.”

Karins recalls, “We got involved in 2009, and during our investigation, we found that the walls were not rebuilt right in 2000 and were not sturdy enough, even if the windows had stayed square. In Florida, a frame wall with stucco is difficult to do correctly. It’s like a ballet because four trades are involved. There’s a huge difference between a masonry wall and a frame wall—a masonry wall is designed as a mass storage system for water. If moisture gets in, it doesn’t bother the concrete block. A frame wall is damaged by moisture, and the code requires that water not penetrate the wall cavity.”

Though the community had been through it before, Karins states, “The only way to fix this was to reframe the walls and install new windows. We had to disassemble the walls and rebuild them, and we used single-hung windows. Every window was water-tested, and the following spring after a tropical storm not a drop of water entered from the windows.”

Neglect or procrastination for any reason can compound the effect and expense of repairs. Swaysland describes one concrete deterioration issue that has plagued a community due to unusual condominium documents. “The documents required the individual unit owners to be responsible for their own balcony slabs,” he reports. “The size of the individual balconies ranges from 100 square feet to about 250 square feet. As the building aged, the balconies deteriorated such that some constituted a danger. Being responsible for the maintenance and repair of their own balconies, the owners did what normal owners do: procrastinate. The association finally repaired three on an emergency basis, and at least one owner has refused to pay. The amount was twice as much as he would have paid if it were part of a large project because all of the project mobilization and demobilization occurred for one small area.”

“We did an assessment of all the balconies after the three were repaired, and some needed to be replaced and more needed to be repaired. They are now in the process of getting a vote to change their documents so the balconies will be limited common elements and the project can proceed. Having individual unit owners repair their own concrete is impractical from a financial viewpoint and from having noise and dust spread out over a long period. But, it took a strong board to push this through and not bury their heads in the sand. When chunks of concrete fall 20 stories, it gets the attention of the association,” Swaysland notes. 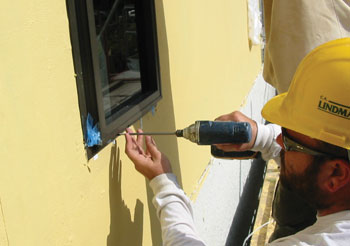 Swaysland advises that communication is essential throughout the project. “You need regular project meetings between the contractor, the board, and the engineer,” he states. “We like to see the manager and board tell the residents what the project entails and the schedule, though the schedule is a best estimate and not set in stone. People can usually deal with a situation if they know what it is.” Swaysland also recommends, “If you catch a problem in the early stages, it’s usually less costly and less disruptive, and you’re able to think it through and deal with it in an orderly fashion.”

To keep a building in good repair, Karins recommends using professional property managers who hire professional consultants to do a survey of existing conditions and develop project plans. “If the property manager is doing his job, he will be busy, and you’ll need an engineer to write specifications, help with bidding, and oversee work while it’s being done,” he notes.

“I think insurance premiums are what will be driving a lot of projects,” Karins states. “In my condominium, we replaced all the exterior windows and reduced the annual insurance premium by $15,000. I replaced my unit’s windows and payback was about three years. But we haven’t had a hurricane since 2004, and I think after the next big one hits that the insurance companies will refuse to insure you if you don’t have impact-resistant windows and doors.”

One method to make a project more palatable to the residents is to obtain a loan so the cost can be spread out as a small addition to fees for several years. Karins observes, “We see that being done, and it’s a very strong selling point because then the payments are pay-as-you-go, and you only write checks for the amount you get the benefit of.”

Maintenance can significantly extend the life of building components, but natural disasters and aging must be dealt with. When those times come, cutting corners on a building project is likely to neither save money nor help your community age gracefully.