The Club at Brickell Bay, a 43-story, Miami condominium built in 2004, is recognized as a 2014 Communities of Excellence “Come-back Kid.” “The property was built on the cusp of the inflated real estate market,” explains Johnny Cidel, who became manager of the Club in 2012. “There were many buyers who had bought units on speculation that they could flip them for a profit, and there was a significant, highly-publicized amount of mortgage fraud. As a result, by 2012 many units were unoccupied, and delinquent assessments exceeded three million dollars,” Cidel reports. The financial problems were compounded by legal, security, records/management, and physical maintenance issues that new management tackled. 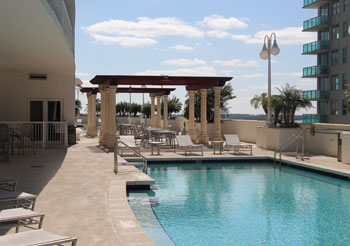 “When FirstService Residential management came, there were approximately 60 illegal tenants in the building,” Cidel relates. “In some cases, this came about through unethical behavior of people representing the association who were renting out unoccupied units on a cash basis. A number of the illegal residents had themselves been victimized.” As many as 25 percent of the cars parking on site were unauthorized; piggybacking at the entrance gate was common; excessive, late night activity had left the community residents vulnerable.

Because of the financial stress, the board had tried self-management and then utilized a series of smaller management companies who were only with the property for short periods of time. This lack of continuity in management resulted in lapses in record management and physical plant maintenance. “We found that cooling towers were not operational, pools were leaking, elevators were entrapping people, and there were frequent flooding and fire incidents,” Cidel recalls. “The pumps and motors had not had preventive maintenance for years.”

“Most of the association’s documents had not been sorted by calendar year, month, vendor, or activity type,” according to Cidel. “In some instances, documents were simply missing, including employee files, financial documents, vendor files, etc. At least 30 unit owners’ names were not correct in the roster.” Older files were also in the office, adding to the confusion. And management found that for 2011, when three management companies had been used, there was no financial statement. “We recreated the financial statement and found budget data for prior years to use as a basis for the year’s budget,” Cidel remarks.

The collections attorney had not properly credited payments and had pursued foreclosures improperly, and the community had 25 legal actions that it had been dealing with. Most of these had resulted from lack of payment to vendors or claims of wrongful termination. These issues were not only expensive, but damaging to the Club’s reputation.

Turning the situation around took…work! “We were up working tirelessly as late as midnight for eight months,” according to Cidel. “We implemented a strategic plan, registered all residents, and hired a very experienced maintenance supervisor. Our management staff took the board on a field trip to see some of our nearby, well-run properties so they could envision that standard. We also took the building staff so they could observe the décor, demeanor, and professionalism we desired, and see how mechanical and equipment rooms should look. The front desk staff toured four-and five-star hotels to see the level of service and style of communication.

“We developed training videos for the staff and recorded the maintenance supervisor explaining equipment and responding to emergencies. This has helped communication with residents and also enabled staff to handle more routine issues,” Cidel notes.

Turning finances around was essential. Corporate staff and on-site management researched, organized, and scanned approximately 50 banker boxes worth of documents. New legal counsel now handles collections, and the board vice president has been very active in negotiating payoff of assessments when units sell. “He would not settle for below 50 percent of what was owed,” Cidel reports, “and he often got 75–80 percent. Meanwhile, we were collecting rent directly from tenants when the owner was behind on payments.”

To remove illegal tenants, Cidel explains, “We initially identified these people by going door-to-door inviting everyone to participate in a raffle. When we checked names, if we found they weren’t a registered occupant of the unit, they were told to leave or pay association fees. Many of the occupants were much bolder than normal and did not respond. Rather than spend money on legal fees, we removed personal items from the units and the occupant would have to come forward if he wanted to claim them. All the leases had been fraudulently manufactured, but we did have to go to court for about ten cases,” Cidel relates. Security was also improved by personnel changes; improved access control; warning, booting, and towing unauthorized vehicles; and hiring off-duty police for the lobby and pool areas.

“We boosted morale by making changes on several fronts,” Cidel relates. “The first item on the agenda was communication. We started a weekly e-mail newsletter giving a quick snapshot of what we were doing and why, and that was very helpful. We began hosting social activities, such as a traditional Spanish paella party. For that event, live entertainment and enough food to serve 1,000 was provided. Walking around the property taking notes, little acts of kindness, and greeting the residents have helped establish a positive, physical presence in the building.”

The association has been in the process of completing major repairs, but there has been an effort to make high-impact minor improvements while pursuing the big-ticket items. “We resurfaced the leaking pools quickly because they were closed, and we also got the air conditioning up and running right away,” Cidel recalls. “We brightened and spruced up the lobby by painting and changing the lighting and furniture. That was economical because we could do it in-house. We also updated the signage, adding backlighting, and changed the administrative office to accommodate more traffic.” A new staff uniform also helped signal the transformation that was in progress.

Returning the property to a stable, prospering condition has been an intensive but successful project, according to Cidel. From January 2012 to late 2013, property values rose approximately 57 percent, security and legal issues were resolved, and bad debt was reduced by approximately 40 percent.

Current manager Dargel Napoles is happy to relate further updates: “Since 2012, Brickell Bay has become a new community, having reduced the delinquency rate from 25 percent to six percent and the bad debt from 3.6 million dollars down to 1.7 million. Plus, we have been working out payment plans with all units that are in arrears. We have come a long way, but that doesn’t mean we will stop here. We are focusing on a major security upgrade and are halfway through a four million dollar concrete restoration project. Since the mechanical components are now in good shape, we have installed gauges and sensors to help us see the bigger picture for maintenance, energy conservation, and management. Our staff is moving from a culture of “guilty until proven innocent” to more of a Disney World “you’re our guest” mentality. Thanks to the teamwork between the board of directors, the management company, staff, volunteer residents, and vendors, we are continuing to move forward and improve.”

Editor’s Note: The other Comeback Kid winner, Ocean Village Club, was featured in the July 2014 issue. To read the article, please visit www.fcapgroup.com/flcaj/flcaj-articles/2014-communities-year-effort-produces-excellence.