With public roads throughout the Sea Woods community of freestanding homes, duplexes, and condominiums, physically securing their borders is not an option. “We have six or seven entrances, plus a bike path that is designated for residents but is open such that access cannot be restricted,” explains manager Linda Armstrong. The community has focused on securing the three pools and involving residents in keeping watch to protect themselves and their property. 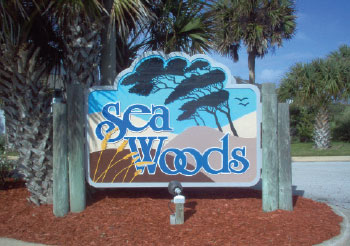 “Shortly after the pools opened, we started a badge system for use of amenities,” notes Armstrong. “Each owner has six to eight badges available, depending on their unit size. In the past, we had problems, especially on the weekends, with people who would go to the beach and then come to our pools to wash the sand off. Those problems are minimal now that we’ve started checking badges,” says Armstrong. “Staff patrol the property at varying hours to check for badges and any misconduct. There are not any security guards, and we don’t want a confrontation. If the visitor doesn’t have their badge, he is told not to come back without it. If he gives our employee a hard time, the employee will ask him to get the badge immediately. In that situation, a trespasser generally leaves and doesn’t come back.”

Alarms have also been installed at the pools in case of trespassing after pool hours. “The system sounds an alarm and announces a warning that you are trespassing and the authorities will be notified,” according to Armstrong. “It’s usually a tenant who thinks they’ll have a night swim, but if the trespassers don’t leave, the police will be called. For a time, we did have owls accidentally setting the alarms off,” Armstrong recalls. 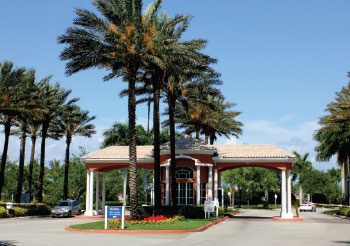 Neighborhood Watch was already active when Armstrong came to the property in 2004, and she describes it as a “neighborly” Neighbor-hood Watch. “We don’t have guns or patrols,” she relates. “We just call on residents to be observant and provide information. If a resident is coming home late, we encourage them to drive by the pools and look for anything out of the ordinary. On holidays, especially Halloween, the group has started having a social gathering by the pool. That provides a fun event and prevents vandalism or toilet papering the trees.”

“The official Neighborhood Watch group has 25–30 members,” according to Armstrong. “Martha Skinner, who heads the group, sends e-mails reminding residents of basic security measures like locking cars. She alerts residents to current crime issues, with e-mails going to about 200 residents.”

In January 2012, a night-time arson event was noticed by a resident. A fire had been set at the back of the clubhouse, and even though the fire department responded promptly, considerable damage was done to the exterior of the building. “The arsonist was identified with a neighbor’s security camera, and after the incident, the police encouraged us to install security cameras,” Armstrong reports. The community installed 12 cameras, which cover the clubhouse and pool areas, for approximately $2,000. These can be viewed by association employees and the footage reviewed for any incidents. The video was recently used to identify a thief at a nearby store who passed by a bathhouse camera in his escape.

The community enjoys strong police support and patrols. “If we have suspicions, they follow up,” Armstrong relates. “They suggested retaining palmetto and other hostile vegetation at the edge of the property. Another suggestion we have followed is trimming bushes away from buildings to avoid providing a hiding place.”

“We don’t have a lot of crime,” Armstrong comments. “The fact that our owners are interested, active, and observant helps keep it down. Many of our residents are active around the community with biking and walking, and even if they’re not in Neighborhood Watch, they will report anything suspicious that they see. Their combined response measures and resident involvement have successfully provided a fence against crime for Sea Woods.”

The VeronaWalk community, which was turned over from the developer this spring, has been focused on safety and security since its inception in 2004. VeronaWalk’s safety and security depend on resident involvement plus effective systems. “The main component of our security system is access control,” according to safety and security committee chairman Barry Gerenstein. “Every resident who is licensed and insured has a registered bar code on their car and no one can follow in on their bumper. For each guest, we take a picture of their license, the driver, and their driver’s license, and we store it on a non-Internet connected computer. The residents can have a guest list so the visitor’s information is taken once and stored, but vendors are scanned every time they enter.”

The community employs professional security officers to man the entrancegate around the clock and also patrol the town center and pool areas. “Theguard at the town center also makes sure all the lights are out,” Ross notes.

Surveillance cameras provide coverage of the common areas, and footage can be recalled for times in question. Gerenstein recalls, “A couple of years ago, we used the camera footage to identify teens who had spray-painted graffiti at the tennis courts, and we were able to get the parents to pay for the damage. An additional safety feature in the community is address signs, which can be activated to blink and help direct a first responder to the correct house in an emergency.”

Education and involvement of residents is another key component of VeronaWalk’s safety. “Neighborhood Watch started in 2006, and we have about 1,000 homes involved,” according to Gerenstein. “We’ve never subscribed to patrolling the streets, but the program has changed over the years. We advise residents to be observant, get to know your neighbors and what the norm is, and if you see something that doesn’t look right, make a call. We bring in the sheriff’s department each year for a crime prevention seminar and regular reminders—don’t go out with your windows open; every home has a central alarm system, so use it, etc.”

This is an excerpt from the July 2014 article about VeronaWalk of Naples. To read the article in its entirety, please click here.